Recapping the best and worst of the NHL in 2015

Recapping the best and worst of the NHL in 2015
GLENDALE, AZ - APRIL 11: Sam Gagner #9 of the Arizona Coyotes skates out onto the ice before the NHL game against the Anaheim Ducks at Gila River Arena on April 11, 2015 in Glendale, Arizona. (Photo by Christian Petersen/Getty Images)
WASHINGTON, DC - JANUARY 01: Alex Ovechkin #8 of the Washington Capitals celebrates after scoring a first period goal against the Chicago Blackhawks during the 2015 NHL Winter Classic at Nationals Park on January 1, 2015 in Washington, DC. (Photo by Rob Carr/Getty Images)
BOSTON, MA - MARCH 28: Henrik Lundqvist #30 of the New York Rangers allows a goal by Milan Lucic #17 of the Boston Bruins in the first period at the TD Garden on March 28, 2015 in Boston, Massachusetts. (Photo by Jim Rogash/Getty Images)
SAN JOSE, CA - MARCH 02: Devante Smith-Pelly #21 of the Montreal Canadiens is checked into the glass by Brenden Dillon #4 of the San Jose Sharks at SAP Center on March 2, 2015 in San Jose, California. (Photo by Ezra Shaw/Getty Images)
UNIONDALE, NY - MARCH 29: Tyler Kennedy #26 of the New York Islanders skates in warm-ups prior to the game against the Detroit Red Wings at the Nassau Veterans Memorial Coliseum on March 29, 2015 in Uniondale, New York. The Islanders defeated the Red Wings 5-4. (Photo by Bruce Bennett/Getty Images)
UNIONDALE, NY - APRIL 11: The New York Islanders and the Columbus Blue Jackets take the opening faceoff in their game at the Nassau Veterans Memorial Coliseum on April 11, 2015 in Uniondale, New York. This is the last regular season game to be played in the building as it stands now. The team will relocate to the Barclay's Center in the Brooklyn borough of New York City starting in the 2015-16 season. (Photo by Bruce Bennett/Getty Images)
PHILADELPHIA, PA - APRIL 20: Andrew MacDonald #47 of the Philadelphia Flyers celebrates after scoring against the Washington Capitals during the second period in Game Four of the Eastern Conference Quarterfinals during the 2015 NHL Stanley Cup Playoffs at Wells Fargo Center on April 20, 2016 in Philadelphia, Pennsylvania. (Photo by Patrick Smith/Getty Images)
WASHINGTON, DC - APRIL 14: Wayne Simmonds #17 of the Philadelphia Flyers checks Karl Alzner #27 of the Washington Capitals during the first period in Game One of the Eastern Conference Quarterfinals during the 2015 NHL Stanley Cup Playoffs at Verizon Center on April 14, 2016 in Washington, DC. (Photo by Patrick Smith/Getty Images)
VANCOUVER, BC - MARCH 27: Matt Bartkowski #44 of the Vancouver Canucks gets his helmet adjusted during their NHL game against the Chicago Blackhawks at Rogers Arena March 27, 2016 in Vancouver, British Columbia, Canada. (Photo by Jeff Vinnick/NHLI via Getty Images)
WASHINGTON, DC - MARCH 04: Eric Staal #12 of the New York Rangers checks T.J. Oshie #77 of the Washington Capitals during the second period at the Verizon Center on March 4, 2016 in Washington, DC. (Photo by Bruce Bennett/Getty Images)
Up Next


BEST MOMENT: Chicago fans saw their hockey team win the Stanley Cup on home ice for the first time in 77 years. The Blackhawks won their third Stanley Cup in six years with a thrilling 2-0 Game 6 victory over the Tampa Bay Lightning, the first time since 1938 that they captured a championship in their own city.
The team's core -- Jonathan Toews, Patrick Kane, Marian Hossa, Patrick Sharp, Conn Smythe winner Duncan Keith and Brent Seabrook – enjoyed a banner season together and further solidified their franchise executing one of the sport's great dynasties.

BIGGEST SURPRISE: The Calgary Flames. After five straight playoff-empty campaigns, the Flames rode an impressive wave of young talent, clutch goal scoring and decent-enough goaltending to a 97-point season and the organization's first playoff series win since it reached the Stanley Cup finals in 2004.

BIGGEST CHOKE: The New York Rangers won the President's Trophy with 113 points, but squandered the Eastern Conference Finals in Game 7, when the Tampa Bay Lightning bounced back from a 7-3 loss in Game 6 and posted a 2-0 blanking in the do-or-die showdown. The Lightning went on to fall in the Stanley Cup Final. 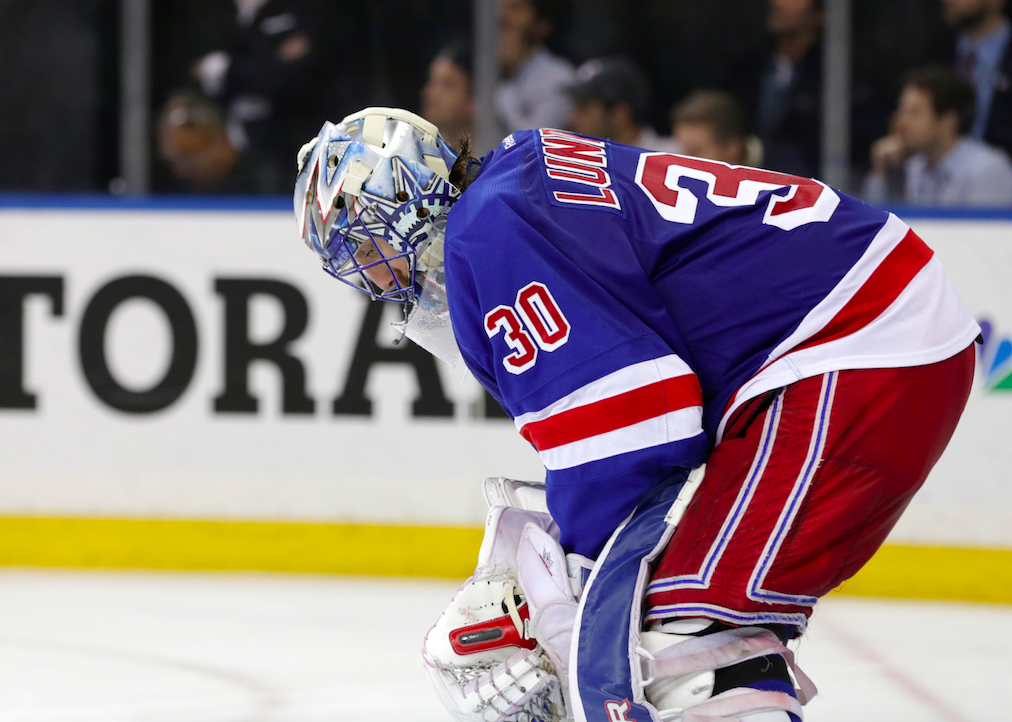 BIGGEST FLOP: Los Angeles Kings. Let's face it, the Kings were due a down year. After two Stanley Cups in three seasons -- and three trips as far as the Western Conference finals in that stretch -- LA collapsed under the exhaustion of deep playoff runs, missing postseason altogether. The Kings were just the third defending Stanley Cup champions to miss the playoffs since 1970.

FUNNIEST QUOTE: Nicklas Lidstrom didn't know anything about the Detroit Red Wings when he was a rookie. So, he asked for No. 9, which was Gordie Howe's number. He chuckled at the Hall of Fame induction ceremony, "I got my first lesson in Red Wings history."

BEST VINE: Because you can never watch just one ...


BEST TWEET: This was an epic one from veteran Jaromir Jagr ... 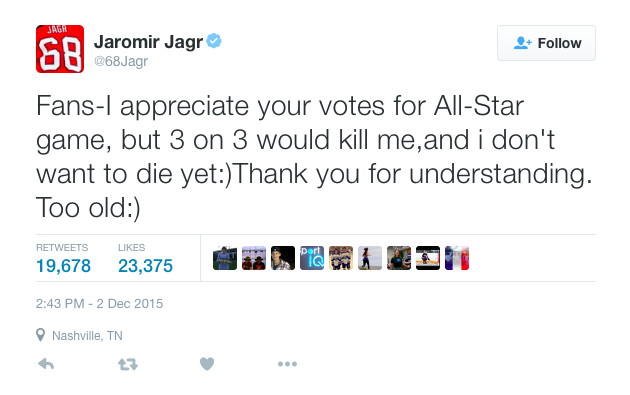 BEST UNIFORM CHANGE: We might get some heat for this, but we love the new Islanders uniforms. Sometimes branding changes bring about over-the-top designs, ugly colors or just a total deviation from the franchise's tradition. These new sweaters are simple, cool and maintained the Islanders' legacy fonts and accent colors. 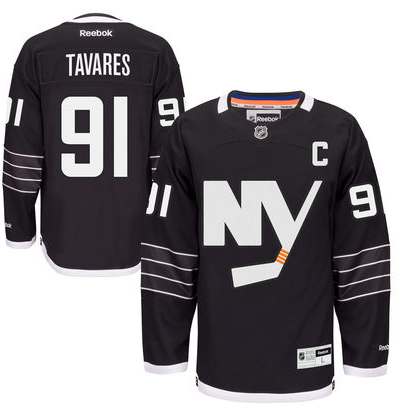 LVP: Alexander Semin. Semin signed a five-year, $35 million deal with the Carolina Hurricanes before the 2013-14 season, but the Russian forward managed just 105 points in 166 games -- and just 19 in 53 -- before being bought out this past offseason.

MVP: Carey Price enjoyed the best season of his career in 2014-15, as he would finish the season as the leader of the three leading categories for goaltenders: GAA (1.96), save percentage (.933), and wins (44), all career highs. He won the Hart Memorial Trophy as the league's most valuable player, the Vezina Trophy as best goaltender, the Ted Lindsay Award as most valuable player as voted by the NHLPA, and the William M. Jennings Trophy for fewest goals allowed. He became only the second player in franchise history to win all four awards in one season.