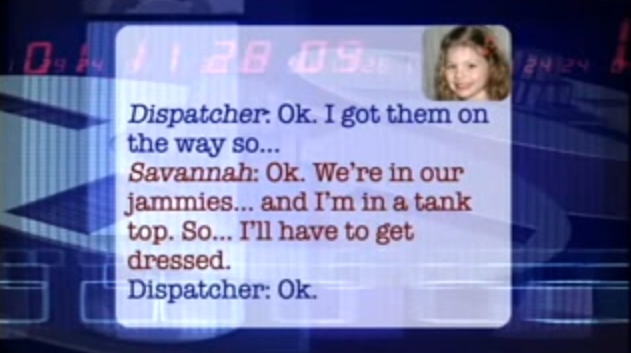 5-year-old named Savannah from Indiana is our latest and greatest hero. We preface this story by noting that Savannah's father is okay now.

SEE ALSO: There's now a robot that swipes Tinder for you based on your body's reaction

When Savannah's father began having chest pains, she knew exactly what to do and called 911. From here, things take a turn for the adorable.
"I don't know what I'm gonna wear...but he really needs oxygen real fast! " Savannah, age 5, YouTube
Not only did she remain calm and communicate the issue to the emergency dispatcher, she provided a bit of humor in the process.

As she runs to unlock the front door, she yells out "Don't worry dad!" When the dispatcher alerts Savannah that the ambulance is on the way, she says "Okay, we're in our jammies...and I'm in a tank top, so I'll have to get dressed. I don't...[know]...what I'm going to wear, but, he really needs oxygen, real fast."

She continues on talking to the dispatcher, alerting him that she really needs to go put on some proper clothes. Savannah also lets her new friend know that they have a very small dog named Lou, "that kinda barks."

According to the 911 dispatch recording posted to YouTube, this call took place five years ago, but is all of a sudden resurfacing to totally brighten our days!

Here's another daily dose of cute for you:

More from AOL.com:
Brain scan shows the stunning bond between mother and child
YouTuber Jessie Paege dishes on her style, music, and life as a 'secret mermaid'
The internet is going crazy over this Taylor Swift look-a-like
Tags
Read Full Story