Winter Storm Echo will lay down a blanket of heavy snow across much of the West and parts of the Plains and Upper Midwest over the next several days as it helps to usher in a colder weather regime across the western half of the United States.

Spread the Word
Winter Storm Echo will lay down a blanket of heavy snow across much of the West and parts of the Plains and Upper Midwest.

This storm is wrapping up a siege of Pacific storms on the West Coast that has lasted longer than a week, thanks in part to an active jet stream pattern.

It will also follow in the footsteps of a separate, vigorous storm system that spawned tornadoes in Texas this weekend, in addition to producing some wet snow in parts of the Rockies and Plains.

Let's start with Echo's impact in the West.

Wintery weather in the United States so far this year:

Tapping a so-called atmospheric river of moisture from the subtropical central Pacific, this system has already wrung out heavy snow in the Cascades and Siskiyous from western Washington into Oregon, and adjacent low elevations.

As of Sunday morning, 20 inches of new snow had piled up on Oregon's Mount Bachelor Ski Area, and 16 inches of snow had fallen near La Pine, Oregon.

Even elevations as low as 2,000 feet had reported 6 to 8 inches both east and west of Medford, Oregon, early Sunday.

Webcams from both the California and Oregon DOT showed that the snow was impacting travel Sunday morning on Interstate 5 in southern Oregon and northern California. Caltrans closed the northbound lanes of I-5 from Yreka, California, to the Oregon state line for a time Sunday afternoon. Several mountain roads were also closed in southwest Oregon due to heavy snow, falling trees and near-blizzard conditions.

By Sunday afternoon, heavy snow was falling over central parts of the Sierra Nevada range in California. That snow has started tapering off, and winter storm warnings are no longer in effect for the Sierra Nevada. 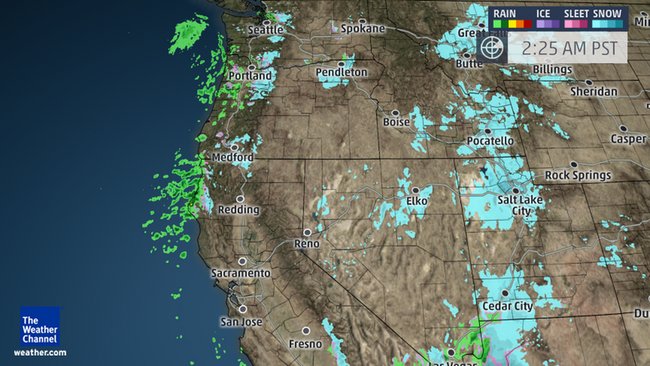 By Monday, the most significant snow will have shifted into the Rockies, from northern Arizona to Montana, but some snow may linger in parts of Oregon, northern California and Nevada. 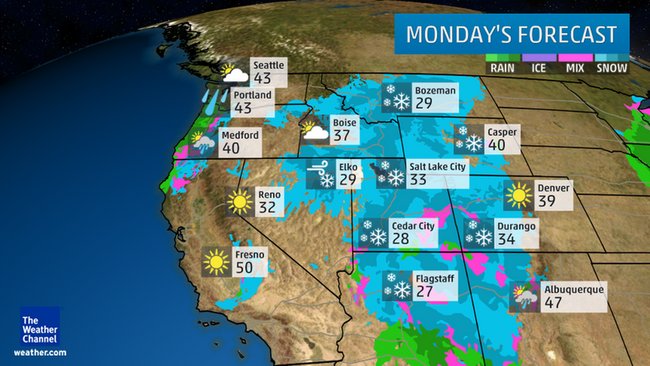 Total snowfall should top 1 foot in parts of the northern Rockies.

Significant accumulations are also expected in some lower elevations from the Great Basin to parts of Montana, Wyoming and Utah.

This includes Salt Lake City, which could see its heaviest snowstorm since an unnamed winter storm dumped 13.3 inches on the city January 27-30, 2013. Last season brought the second-lowest seasonal snowfall total on record in the Utah capital, with only 15.4 inches total.

In fact, this Salt Lake Valley snow will likely arrive before Monday morning's rush hour, could fall briefly at the rate of over 1 inch per hour, and may continue to be periodically heavy through the day.

There has also been significant rainfall in southwest Oregon and northwest California's lower elevations, which has triggered some additional flooding. Floodwaters reportedly entered homes Sunday morning near Shady Cove, Oregon, near White City, Oregon, and near Eagle Point, Oregon. 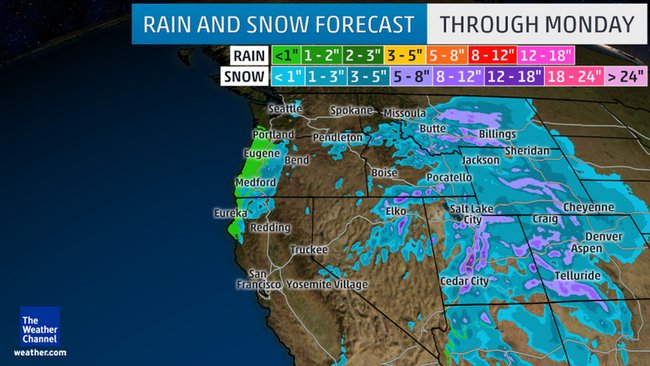 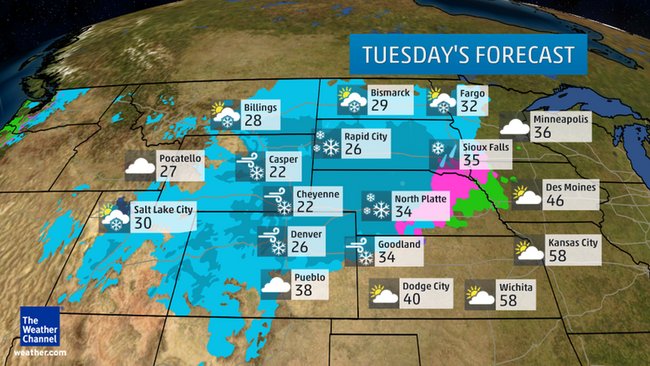 Tuesday night into Wednesday, low pressure strengthens and heads toward the Upper Midwest, wrapping snow around its circulation in the northern Plains, Upper Mississippi Valley and northern Great Lakes. 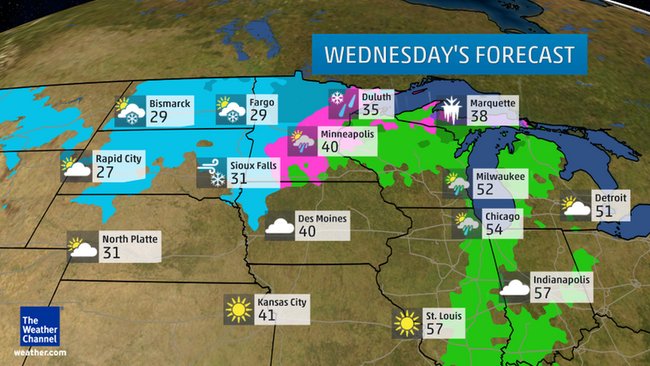 Some lingering, wrap-around mainly light snow and wind can be expected in the Upper Midwest and northern Great Lakes Thursday, and even while Echo's low heads up to near Hudson Bay, some lake-effect snow is possible in the Great Lakes into Friday.

With more cold air in place for this storm than with the first system earlier in the week, we expect the snow swath east of the Rockies to be larger.

We're still a bit too far out for precise snow forecasts in the Plains and Midwest, but here is our general thinking on snowfall amounts east of the Rockies through Wednesday. Keep in mind, this includes only Winter Storm Echo, not the early-week snow most heavily affecting areas farther south in the Plains.

As low pressure gains some strength, strong winds Tuesday, Wednesday, and possibly early Thursday may lead to reduced visibility in blowing snow, some drifting snow, and some local whiteout conditions on the High Plains and in the prairies of the northern Plains.

If you have travel plans in these areas, check back for the latest forecast and have an alternate plan ready, including delaying or canceling your trip, as heavy, wind-driven snow can make driving too dangerous.

Check back with us at weather.com for updates to this forecast.

Incidentally, "Echo", from Greek mythology, was a nymph given a speech impediment so she could only repeat what she heard.

More from AOL.com:
Mortgage, credit card rates may see big shift this week
GOP hopeful on the rise steals lead from Trump
Experts say Jesus looked nothing like you imagined him