Why this 'normal' photo of a desk is freaking everyone out 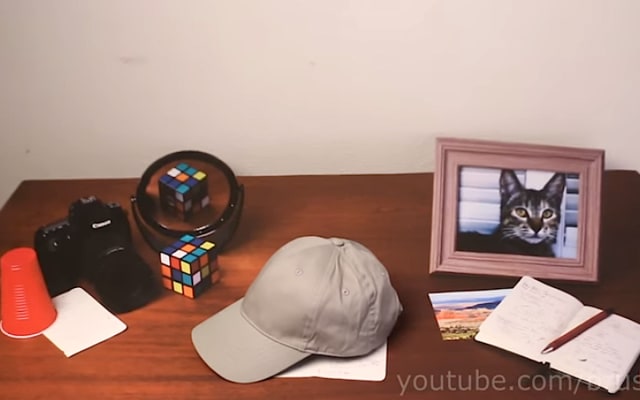 Looks can be deceiving.

But what if we were to tell you that only one item is three-dimensional.

The YouTube user, Brusspup, who is known for creating science and optical illusion videos, uploaded the bizarre video just three days ago. Since then, over half of a million people have been stumped as to which item on the table is the real one.

As Brusspup notes, "I've always wanted to try another one of these videos so here it is. There is no trick editing or cuts. All of the objects are just prints, except for the objects that are off to the sides."

All the items on the table, except one, are actually 2D print outs. This trick is known as a forced perspective illusion, anamorphic illusions, or "slant art". And this isn't the first time its been used to blow people minds; Leonardo DaVinci coined the trick with his "Leonardo's Eye", a drawing that looks elongated you angle the paper away from yourself. Since the Renaissance, it's been used in everything from sidewalk art to children's books.

This isn't Brusspup's first anamorphic illusion rodeo either. His first video back in 2012 that showed all 2D prints including a sneaker and painter's tape hit over 27 million views on YouTube. We think it's safe to say that part two will go viral too.

But let's get back to the business at hand -- the one real item.

If you're still left scratching your head, we' ll give you a hint: it's something you wear. Yes, that's right, the only 3D item on the desk (besides the desk of course) is the hat.

Were you able to crack the photo? Let us know in the comments section!

And for more optical illusions, watch the video below!
X