HUGE FAIL: How do you mix up Waka Flocka Flame with Richard Sherman though? 󾌴󾌴󾌴

It's not an uncommon phenomenon to mistake a passerby for their celebrity doppleganger-- most of the time, we're able to realize our mistake in time to stop ourselves from fangirling over a stranger and asking them for an autograph.

However, three workers at Seattle-Tacoma International Airport were so excited to have just met Seahawks star cornerback Richard Sherman that they quickly shared it on Facebook without realizing their glaring mistake: It wasn't Sherman. Even more embarrassing, it was another A-List celebrity.

SEE ALSO: You can literally call Shia LaBeouf on the phone right now

It's understandable how Linien Cabanada mistook "No Hands" rapper Waka Flocka Flame for the famous footballer-- Waka and Sherman do in fact have some similar physical features. Both the rapper and footballer sport the same shoulder-length dreadlocks, are both 6'3"... and that's kind of it. See for yourselves:

No matter who you are, no matter what you do, you'd like to witness history.

If you've never really stopped to look at a photo of either man before, it's an innocent mistake.

Embarrassed when someone pointed out his mistake, Cabanada eventually went back to update his post, but thanks to Facebook's "Edit History," you can still see it here: 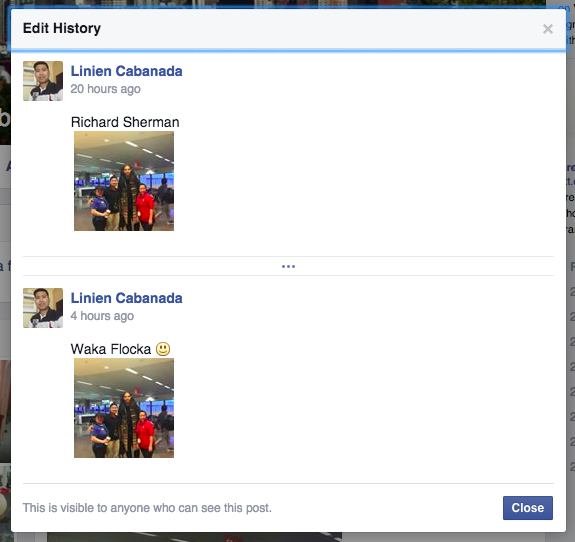 Honestly, both men are extremely accomplished in their respective career paths. Wouldn't be too bad to be mistaken for either!

Check out these insane celebrity dopplegangers:

More celebrity news:
Vanna White has the world's most G-rated wardrobe malfunction on 'Wheel of Fortune'
Lady Gaga opens up about her rape: 'It changed who I was completely'
Pamela Anderson bares all for last Playboy nude issue
Tags
Read Full Story