Warm weather to dominate US this week

It has not felt much like December so far across parts of the United States, but by later this week practically nobody will feel like December in the Lower 48 states as above-average temperatures take over virtually the entire country.

In some parts of the country, temperatures will soar up to 30 degrees above early-December averages at times this week. Below are the forecast details.

As we start meteorological winter, which runs from Dec. 1 through Feb. 29, true arctic air remains locked up in extreme northern Canada, well to the north of the U.S. border and even well north of all the major Canadian cities.

Friday, at least 16 Canadian cities set daily record highs, particularly in Manitoba, where the city of Morden, southwest of Winnipeg, soared to 14.2 degrees Celsius (about 57.6 degrees Fahrenheit). An additional fourteen daily record highs were set in Manitoba Saturday-Sunday, including Emerson (7.1 degrees Celcius/44.8 degrees Fahrenheit on Sunday) where records date back to 1877.

Speaking of warm weather, take a peek back at some weird summer weather across the U.S.:

Warm weather to dominate US this week
LAKE MEAD NATIONAL RECREATION AREA, NV - AUGUST 03: The ruins of the Hannig Ice Cream Parlor are shown in the ghost town of St. Thomas on August 3, 2015 in the Lake Mead National Recreation Area, Nevada. The town was founded in 1865 by Mormon pioneers at the site where the Muddy River flowed into the Colorado River and at one point had about 500 settlers. The town was abandoned in 1938 after the construction of the Hoover Dam caused the Colorado River to rise. The area was once submerged in 60 feet of water but became entirely exposed to the air as a severe drought in the Western United States over the last 15 years has caused Lake Mead to drop to historic low levels. (Photo by Ethan Miller/Getty Images)
UNITED STATES - JULY 30: A severe thunderstorm passes over the U.S. Capitol on Thursday, July 30, 2015. (Photo By Bill Clark/CQ Roll Call)
NEW YORK, NY - AUGUST 17: People enjoy a hot afternoon at the Astoria Pool in the borough of Queens on August 17, 2015 in New York City. The main pool, the biggest in New York City and administered by the New York City Department of Parks and Recreation, sees over 3,000 people on a typical summer weekday. New York city is in the middle of a heat wave, with temperatures in the high nineties and with a heat factor making it feel over 100 degrees. (Photo by Spencer Platt/Getty Images)
Up Next

Highs reached the freezing mark as far north as Thompson, Manitoba on Friday (roughly 55 degrees north latitude, about 470 miles north of Winnipeg). The average high on December 4, there, is -13.8C (7.1 degrees F). Just a bit farther northeast of there on Saturday, Gillam, Manitoba, reached the freezing mark which also was a new daily record (0.3 degrees Celcius / 32.5 degrees Fahrenheit).

In the U.S., both Marquette, Michigan (50 degrees at the NWS office in nearby Negaunee Township), and International Falls, Minnesota (45 degrees), tied their daily record highs Friday.

On Saturday, International Falls tied its record warmest low temperature for the month of December, only dipping to 36 degrees just before midnight. Then on Sunday a daily record high of 45 degrees was set. So much for the "Nation's Icebox," at least for awhile. 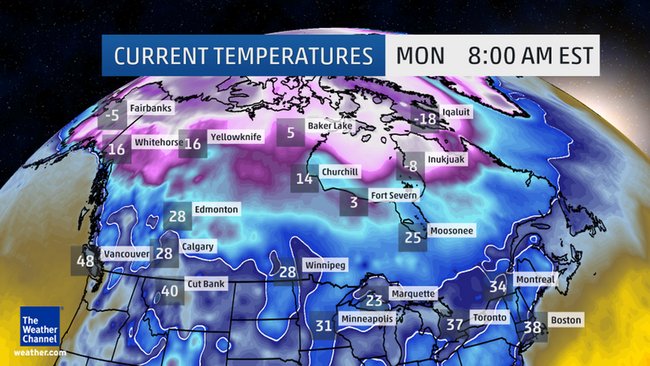 While December is early in the winter season, it is quite common for chunks of bitterly cold air to reach the U.S. during the first half of the month.

However, most computer model forecast guidance shows no such thing happening right into the middle of this December for the eastern two-thirds of the U.S. and Canada, as the arctic jet stream remains well to the north in Canada. 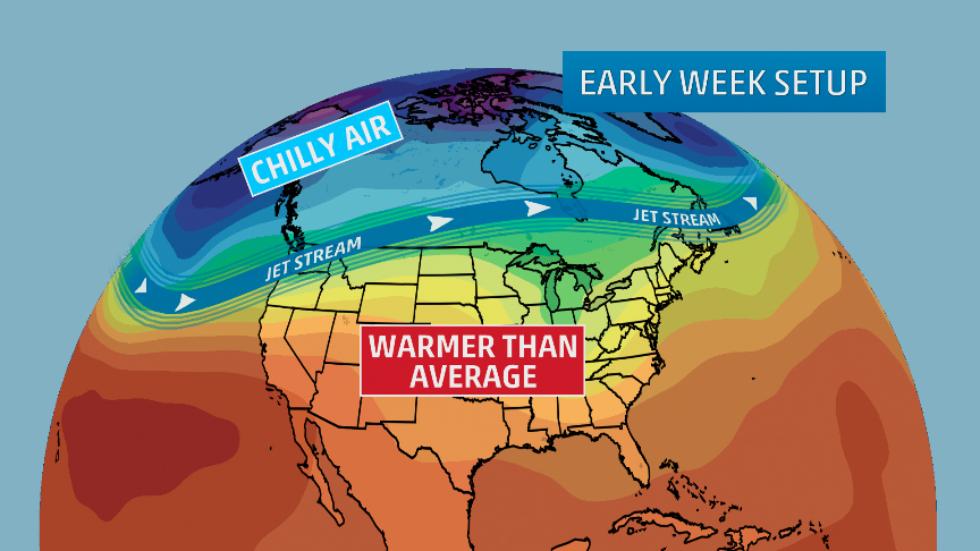 Although some colder air should reach the western and central states later this week, the airmass is projected to be fairly modified, meaning that the coldest air still remains locked up in northern Canada. The result may only be a drop to near or slightly below average in terms of temperatures.

There are no signs of any blasts of cold air reaching the U.S. in the near future. Outside of some mountains, snow will be hard to come by as well. 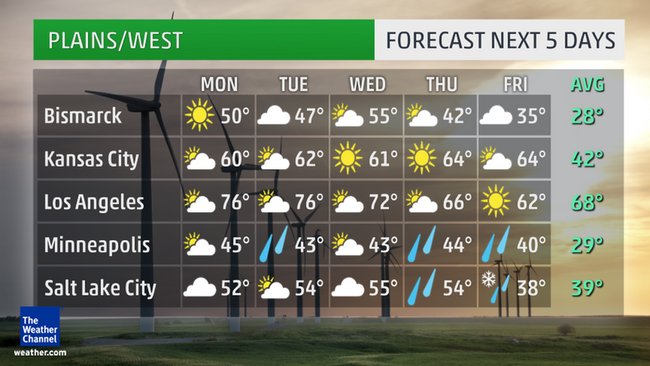 Through this week, the relative warmth is likely to continue. The most unseasonable warmth is forecast across the central U.S., but that warmth should eventually spread to the East Coast by late in the week. 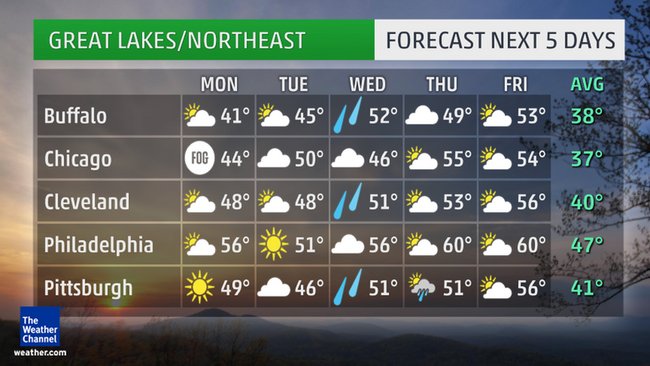 One example is Minneapolis where the average high for mid-to-late this week is in the upper 20s. Low temperatures will only drop into the mid to upper 30s with record warm low temperatures possible (current record is 34 on Thursday and 35 Friday).

Low temperatures in Kansas City will likely bottom out in the 40s later this week and the average high for this time of year is in the lower 40s.

Buffalo, New York, will see low temperatures in the middle 40 to low 50s late this week. This is several degrees above their average high this time of year which is in the upper 30s.

Next Friday and Saturday morning, temperatures are not expected to drop below the freezing mark for most areas east of the Mississippi River, with the exception of parts of Maine and possibly the Upper Peninsula of Michigan.

Numerous daily record warm low temperatures will likely fall by the wayside in the eastern two-thirds of the country.

Daily record high temperatures may be most numerous on Saturday from the Ohio Valley into the Southeast. 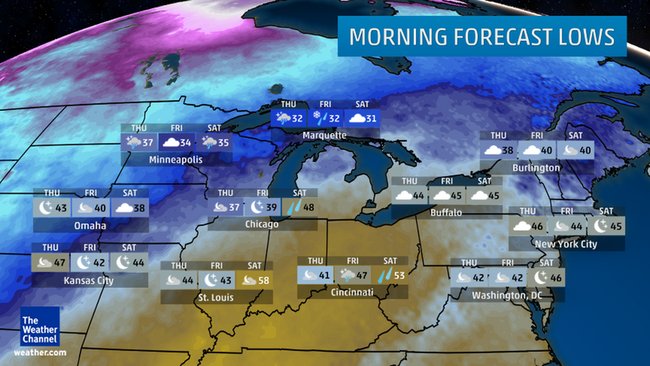 Temperatures will be even more out of whack in Canada, where much of the country, except the typically cold Northwest Territories, Yukon Territory, British Columbia and Nunavut will feel temperatures well above normal into the second week of December. At times parts of central Canada could be up to 40 degrees (24 Celsius degrees) warmer than average, especially in terms of nighttime lows.

Some computer models do show some changes by next weekend. A series of frontal systems should sweep from the West into the Plains, perhaps bringing some cooler air at least to the West and parts of the central states. However, even if such a pattern develops, indications are that at least the eastern half of the country stays warmer than average out ahead of it.

Everything seems to be going to plan according to December temperature outlooks that peg much warmer than average conditions across the northern tier. At least for the first two weeks of December, conditions are closely following what is generally expected during a strong El Niño.

(MORE: One of Strongest El Niños | White Christmas in Jeopardy?)

Long-range computer models show no significant shift in the pattern for the second half of December either, although there are some signs that parts of the West and Gulf Coast may cool off slightly later in the month.

What Effects Will This Warmth Have?

As a result of the jet stream staying north of the U.S. frequently throughout November, parts of the Northeast and Mid-Atlantic have remained rather mild and snowless recently. Philadelphia saw its second warmest November on record in 2015, and made it through the autumn to the start of December without a freeze for the first time since 1939.

For Buffalo, New York, it was the seventh warmest November on record. Buffalo has also yet to see accumulating snowfall this season, marking the longest the city has gone in a snow season without receiving its first measurable snow.

(MORE: Still No Snow in Buffalo)

The lack of snowfall and nights below 32 degrees means a tough start for ski resorts in parts of New England and the Appalachians. Over the Great Lakes, on the heels of record late-season ice into spring 2015, lake ice formation may be significantly delayed.

Interestingly enough, a delay in freezing of the lakes could support a later lake-effect snow season, as colder air moving over warmer lake water can lead to the development of heavy snow bands into early winter. This, however, depends on the ability of substantial moisture to coincide with sufficient cold air, something that has struggled to happen so far this season.

It is not just the northeastern quarter of the country that has escaped the bulk of winter's fury to date.

What About Last Winter?

December 2014 was also a warmer than average month for much of the country. Despite that happening, winter took a fast turnaround in parts of the Northeast.

The pattern changed very quickly in the winter of 2014-15 with record-setting snows hitting parts of New England in January in February.

There are some differences between this winter and last winter, particularly with the strong El Nino currently in place.

Regardless, weather patterns are bound to change at some point, so check back regularly with weather.com for the latest information.