Morning Rewind, 12/7: Jets beat the Giants in the MetLife Bowl

It doesn't happen that often, but when the New York Jets and New York Giants square off in the battle between MetLife stadium co-tenants, both the fanbases and teams alike get worked up with anticipation. And in Week 13, the MetLife Bowl didn't disappoint.

Neither team lit up the scoreboard, but each provided a fair amount of fireworks for their respective fanbases, which each flocked the to the stadium for a matchup that held significant playoff implications. A loss for the Jets would be a critical blow to their playoff hopes, while the Giants would dip to 5-7 with a defeat.

Giants fans had seen this game play out numerous times this season already. By the time the fourth quarter rolled around, the team seemed in control. By virtue of another incredible Odell Beckham Jr. touchdown catch and run, Big Blue led 20-10 entering the final 15 minutes.


But in true 2015 New York Giants fashion, the team fell apart in the fourth.

The Jets tied it in the closing seconds with a touchdown pass from Ryan Fitzpatrick to Brandon Marshall, knotting the game at 20 and forcing an overtime. The receiver also made a bit of history along the way.

After the Jets knocked in a field goal on their first overtime possession, the Giants had one last chance from 48 yards away. Josh Brown, who hadn't missed a field goal all season long, had the chance to extend the game.

But it wasn't so. 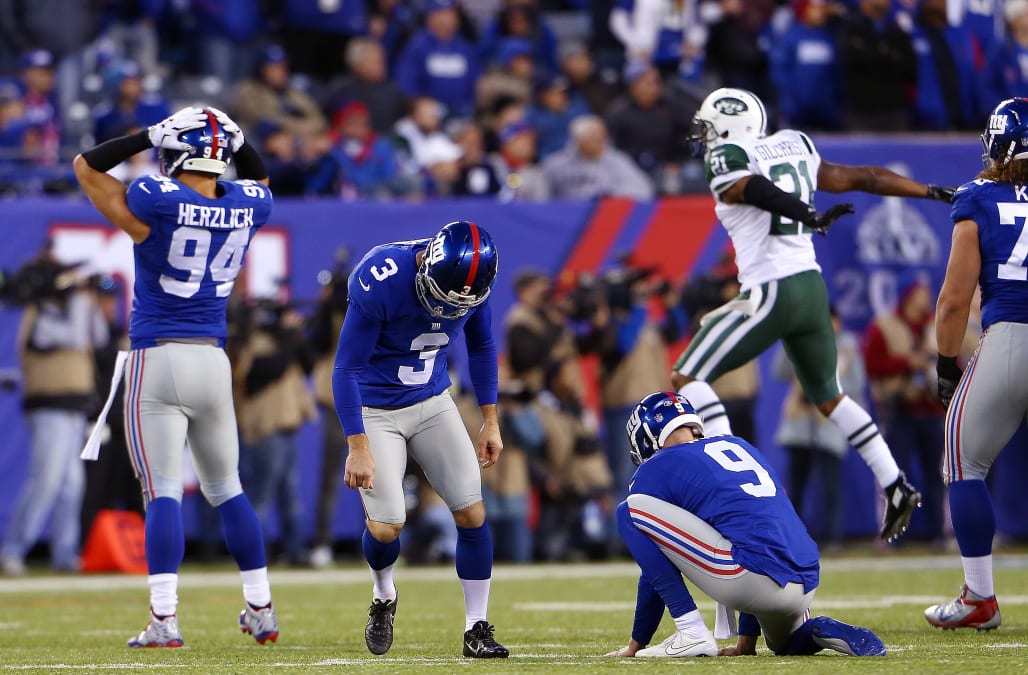 Brown missed the kick wide left, and the Jets walked away 7-5, still with their playoff hopes very much alive. They currently sit in an AFC Wild Card position.

The Giants, at 5-7, somehow are still alive in the race for the division. A Redskins loss to Dallas on Monday Night would set up a three-way tie at the top -- at 5-7 -- between Washington, Philadelphia and the Giants with four weeks to play.