CARY, N.C. (WPIX) -- Police have arrested a woman who posted a photo of a dog with its mouth taped shut on Facebook.

A photo of the chocolate lab began circulating the Internet Friday, Nov. 27 with the caption "This is what happens when you dont shut up!!!" 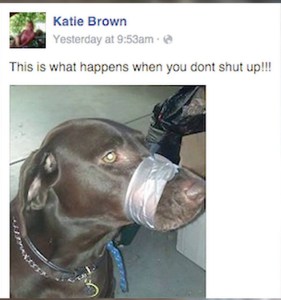 The photo, posted by a woman with the name Katie Brown, replied to a swarm of comments on the photo say, "I cant lie I did it for sixty seconds. It was time out and no more barking."

Lemansky, 45, was charged with cruelty to animals.

Cary Police Captain Randall Rhyne released a statement to FOX61 regarding the incident.

Taping the dog's muzzle shut was a terrible decision on Ms. Lemansky's part, and charging her with animal cruelty under North Carolina law was the right thing to do. At the same time, it's important to also note that our animal control officers who physically examined both Brown and her littermate found the dogs to be very well cared for, which is why we did not and could not remove them from the owner. The dogs are current on their shots, spayed, and microchipped. They are clean and well-nourished and appear to be comfortable in their surroundings. And there were no signs of injury to Brown's muzzle, not even detectable hair loss.

Lemansky faces up to 150 days in jail and a fine.

More from AOL.com:
Starting this December, women in Saudi Arabia will be able to vote and run for office
Chinese leader to address UN on gender equality, vexing some
Proportion of women high earners 'still hasn't changed'