The world's demographics are making an "unprecedented shift," and it's going to have an enormous impact on the world.

That's not a new discovery, but the subject is being explored in detail by HSBC economist James Pomeroy in an immense report sent to clients this week.

The note explores some of the massive changes coming to the global population over not just the next 50 or 100 years, but the next 10. Unlike many economic forecasts, predictions of what the size of the world's workforce will be like in a decade are pretty predictable, since all the future workers have already been born.

Here's a snippet from the report (emphasis ours):

Demographics have long been a key determinant of potential growth rates, but the change in the global population over the next few years is unprecedented. Japan's population started to shrink in the mid-1990s and Germany's started shrinking around the year 2000, but the world's most populous country, China, is now seeing its working-age population shrink for the first time.

Here's the map, showing a sea of red and pink across the advanced world — that means contraction, no growth or slow growth. Only in a belt of the developing world (in Africa particularly) is there any substantial expansion coming by 2020: 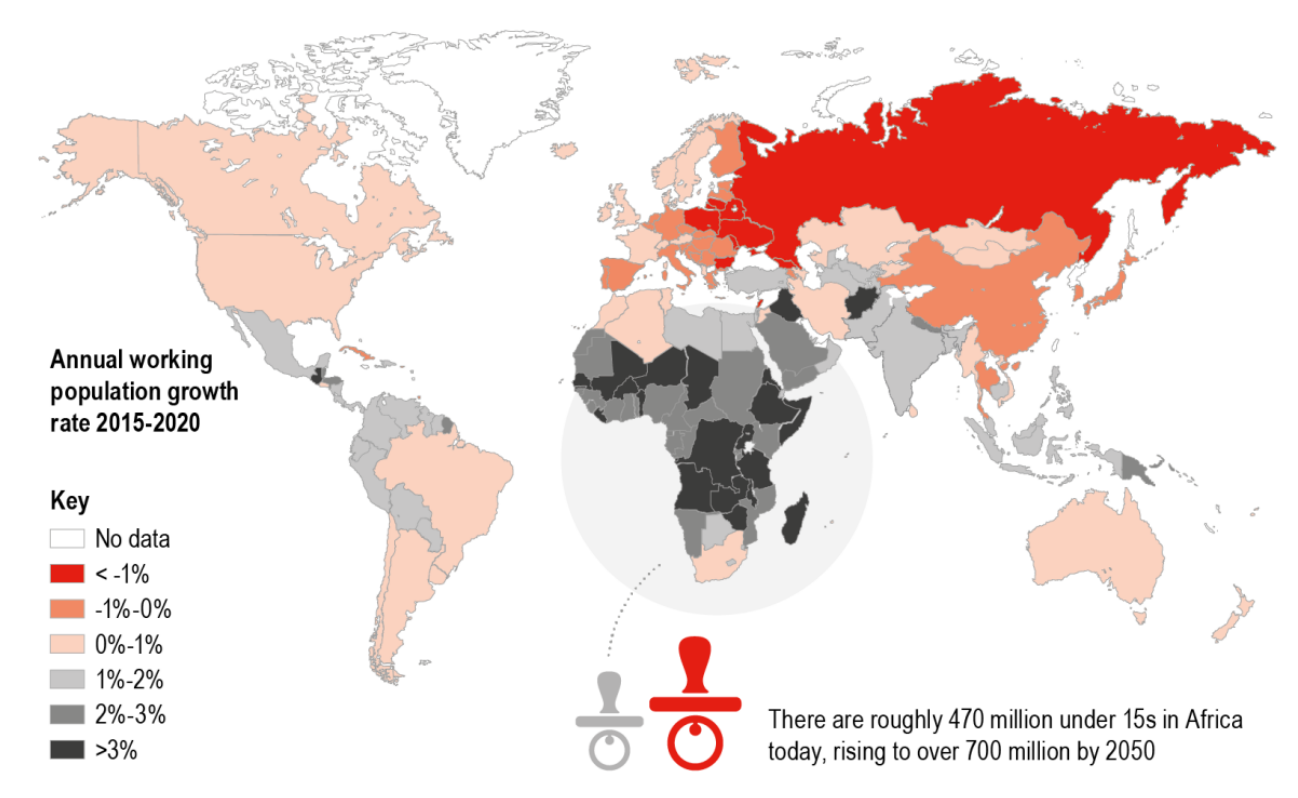 Though the overall global population will continue to grow for some time yet, the growth of the working-age population is slowing down pretty much everywhere.

That's relevant for a bundle of reasons — for starters, it means that around the world there'll be fewer workers to support a growing number of retirees. But it also has some economists expecting significant pressure on wages. If employers have to fight for a group of workers that's growing more slowly, or even declining, they'll need to encourage people to move and their labour will be more valuable.

Here's the chart showing how growth rates will change from 2005-15 to 2015-25, showing barely any advanced economies where the rate of change will improve (Japan's up near the top, but their working population is already in decline. It'll just call less slowly).

The demographic change is a two-sided coin.

Spread the Word
​If the upside is wage growth, then the downside is having to deal with a lower level of economic growth for an extremely prolonged period.

Some countries, like Japan, Russia, and parts of Europe, have already entered the stage that the rest of the world is going into — and they've struggled with it.

In Japan, slowing economic growth has made the county's ever-expanding public debt pile more and more difficult to deal with, and the working-age population has already declined by 11.1% in the last 20 years.

Here's another snippet from the report's author:

Smaller populations mean less demand and less potential output. More retirees relative to the number of working-age people means more fiscal pressure: greater expenditure on healthcare and less tax income. Globally, although working-age populations are still growing, we would expect global potential growth to be 0.6ppt lower per year over the next decade compared with the past decade given these demographic changes. Not great news for heavily indebted economies.

Whatever the effects are, this is one forecast that you can rely on — global demographics are shifting, and there's no way to go back.

RELATED GALLERY: See photos of populations around the globe:

'The change in the global population over the next few years is unprecedented'
NOLA, ITALY - JUNE 28: People look at 25-metre tall 'giglio,' wood and papier-mache statues in the central square during the annual Festa dei Gigli 'The Lily Festival' on June 28, 2015 in Nola, Italy. In 2014 the famous festival became a UNESCO World Heritage site. When St. Paolini, (355- 431 AD) the bishop of Nola, returned in a boat after freeing the town's men from captivity at the hands of the Saracens, he was welcomed by the population with lilies ('gigli'). To carry the Gigli, 120 men, called 'paranza,' shoulder one another and walk slowly through the town. (Photo by Laura Lezza/Getty Images)
Elderly people work out with wooden dumb-bells in the grounds of a temple in Tokyo on September 21, 2015, to celebrate Japan's Respect for the Aged Day. The estimated number of people aged 80 or older in Japan topped 10 million for the first time, the government announced. AFP PHOTO / Yoshikazu TSUNO (Photo credit should read YOSHIKAZU TSUNO/AFP/Getty Images)
MANILA, PHILIPPINES - JANUARY 09: Black Nazarene devotees clamber on top of one another to to touch the cross during the Feast of Black Nazarene on January 9, 2015 in Manila, Philippines. The Feast of the Black Nazarene culminates in a day long procession on January 9 as barefoot devotees march to see and touch the image of the Black Nazarene. The Black Nazarene is a dark wood sculpture of Jesus brought to the Philippines in 1606 from Spain and considered miraculous by Filipino devotees. The event falls a week ahead of the visit of Pope Francis who will travel to Leyte and Manila during his visit to the Philippines from January 15 - 19. The visit is expected to attract crowds in the millions as Filipino Catholics flock to catch a glimpse of the leader of the Catholic Church. The Philippines is the only Catholic majority nation in Asia with around 90 percent of the population professing the faith. (Photo by Dondi Tawatao/Getty Images)
CORK, IRELAND - AUGUST 22: Newly crowned Redhead King and Queen, Alan Reidy and Grainne Keena pose with a crowd full of red heads at the Irish Redhead Convention which celebrates everything to do with red hair held in the village of Crosshaven on August 22, 2015 in Cork, Ireland. Some of the events include the coronation of the Redhead King and Queen, Carrot-tossing, ginger speed-dating, best red beard, best red dog, freckle counting and a redhead parade. The Convention began as a friendly joke between redheaded siblings Joleen and Denis Cronin and also serves as a fundraiser for the Irish Cancer Society raising awareness about skin cancer and melanoma. Red hair is the rarest of hair colours and accounts for just 0.6% of the global population. Ireland has the second highest per capita population of redheads at 10%, next only to Scotland at 13%. The United States is believed to have less than 2% of redheads. (Photo by Clodagh Kilcoyne/Getty Images)
LHOKSUKON, ACEH, INDONESIA - MAY 13: Rohingya and Bangladesh migrants rest inside a shelter on May 13, 2015 in Lhoksukon, Aceh province, Indonesia. Boats carrying over 500 of Myanmar's Rohingya refugees have arrived in Indonesia, many requiring medical attention. They have warned that thousands more are thought to be still at sea. Myanmar's Rohingya Muslim community have long been persecuted and marginalized by Myanmar's mostly Buddhist population. (Photo by Ulet Ifansasti/Getty Images)
Up Next