Thanksgiving 2015 travel forecast: Snow, rain in the West and mostly calm in the East

For the millions of travelers hitting the roads and airports for the Thanksgiving holiday week, weather conditions across the country will be divided between mostly calm in the East and active in the West.

With Winter Storm Bella now gone, quieter weather conditions will rule much of the East through Wednesday thanks to high pressure. Meanwhile, a southward dip in the jet stream will keep most of the rain and snow in the West before sliding into the nation\'s midsection by Thanksgiving Day.

Here\'s the forecast for each day.

Possible travel trouble spots: Overall, the vast majority of the country will have good travel conditions. Scattered showers and mountain snow may move into the Pacific Northwest as a new weather system approaches. A few snow showers are possible across parts of northern Lower Michigan and Downeast Maine, where a few slick roads are possible. 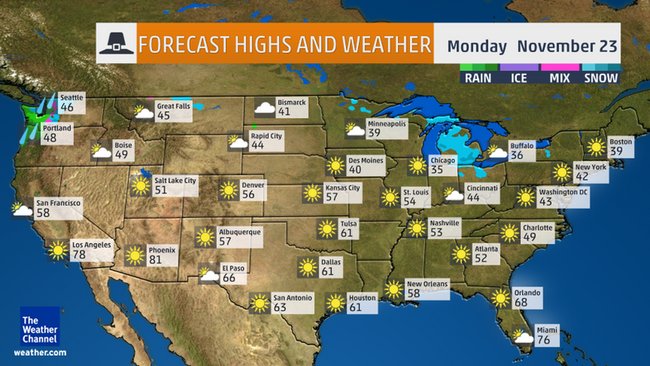 Possible travel trouble spots: A new storm system will continue to push into the Pacific Northwest and northern Rockies, bringing rain and snow to parts of Washington, Oregon, Idaho, western Montana, northern California and northern Nevada. This is a cold weather system, so snow is possible in lower elevations including parts of the Interstate 5 corridor. Elsewhere, a few lake-effect snow showers may develop near Lake Erie and Lake Ontario. 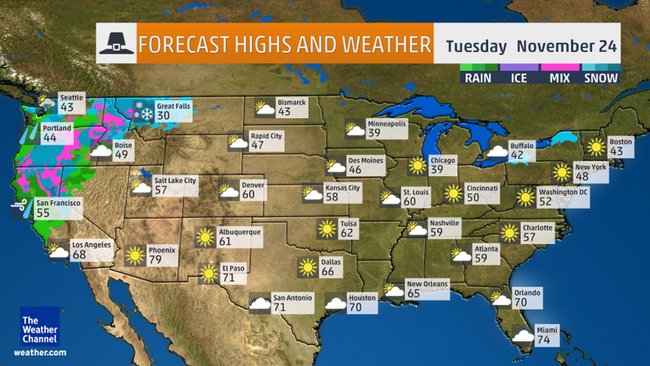 Possible travel trouble spots: A cold southward dip in the jet stream continues to dive through the West. As a result, snow will fall in several states in the region – from California\'s Sierra Nevada and parts of Idaho, Montana, Nevada, Utah and Wyoming. Some of this snow may reach North Dakota, South Dakota, western Nebraska and northern Minnesota late in the day. Strong winds in the northern Rockies and adjacent High Plains may produce areas of blowing and drifting snow. Ahead of that storm system, increasing moisture will result in scattered showers, drizzle and low clouds from Texas to parts of Arkansas, Oklahoma, Kansas, Missouri, Iowa, eastern Nebraska, Minnesota and Wisconsin. 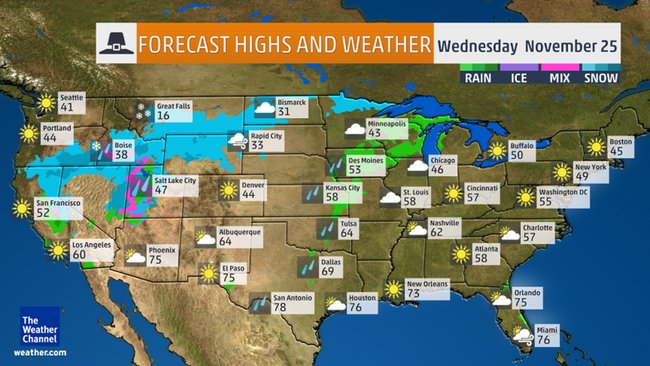 Possible travel trouble spots: The western storm system begins to push into the nation\'s midsection where a swath of rain will expand from the Upper Midwest southwestward to the southern Plains; thunderstorms may occur in Oklahoma and Texas. Snow is expected in the cold air behind the storm from central Minnesota and northern Wisconsin to South Dakota, western/central Nebraska, northwest Kansas, Wyoming and Colorado. Quiet weather conditions persist in much of the East. 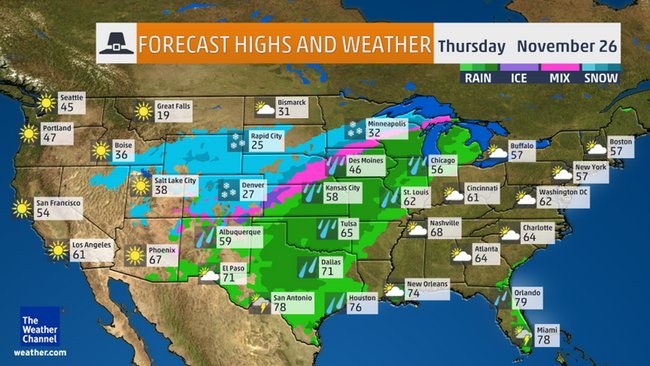 Possible travel trouble spots: Rain with some embedded thunderstorms will soak parts of the southern Plains, lower to mid-Mississippi Valley, Ohio Valley and Great Lakes. Some light snow is possible from western Wisconsin to Michigan\'s Upper Peninsula. Quiet weather continues to persist along much of the East Coast, although showers will begin to develop in New England Friday night. 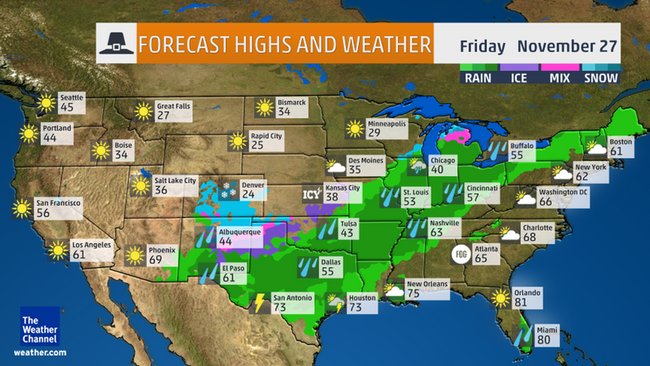 Possible travel trouble spots: Cold front moves through the East with showers, perhaps mixed with or changing to snow across the far interior of the Northeast and northern New England. Showers expected in much of the South. Some freezing rain, sleet or snow is possible in the southern Plains, including west Texas, eastern New Mexico and western Oklahoma as arctic air interacts with moisture in an easterly upslope flow behind a cold front. 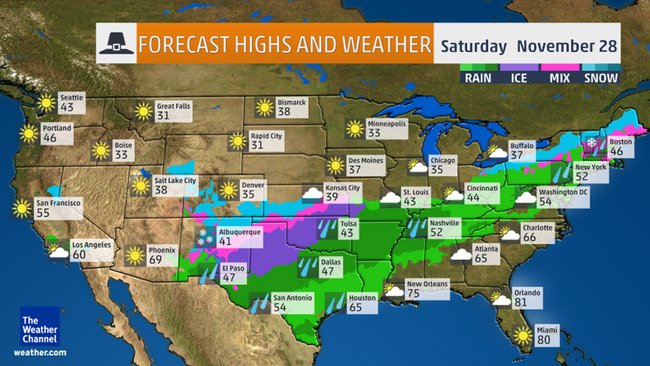 Possible travel trouble spots: Rain showers expected in portions of the South with some icy conditions still possible in western parts of Texas and Oklahoma. Mainly light snow forecast in the central Plains and Rockies. Good travel conditions appear likely in the Northeast, Great Lakes, Upper Midwest and along the West Coast. 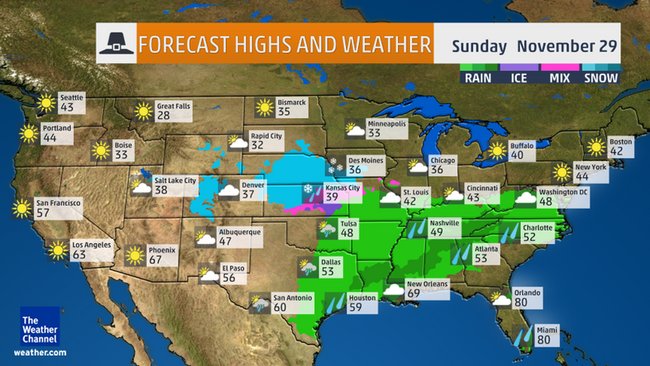