The scary connection between sexual assault and the lack of toilets 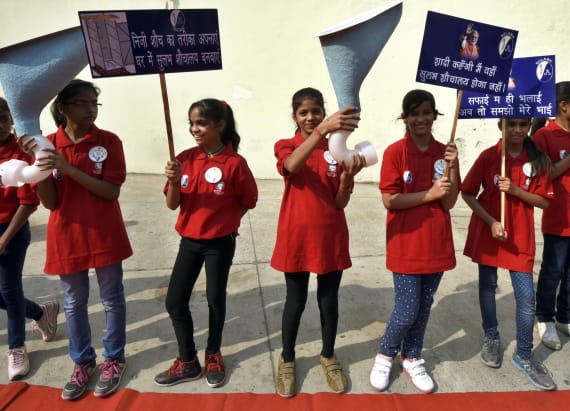 Believe it or not, world leaders are currently in the midst of commemorating World Toilet Day. The international community's annual spotlight on bathroom facilities may at first sound like a practical joke. But for girls and women globally, the consequences of inadequate access to sanitation are no laughing matter.

To understand how sanitation influences women's well-being, one need only look to my native India, where lack of safe toilets is one of the leading causes of rape. Without adequate facilities at home, far too many women are forced to use dilapidated public facilities or embark on unsafe journeys to manage their needs outdoors.

According to data from No Ceilings, an estimated 2.5 billion people worldwide don't use toilets, and more than 1 billion continue to defecate outdoors. In addition to the impact that poor access to sanitation has on people's health and dignity—200,000 children die every year due to fecal contamination—it also poses the threat of sexual abuse and violence against women.

Sexual assault has become a growing concern in India, where reported cases are on the rise. In 2012, the infamous gang rape and death of Delhi medical student Jyoti Singh rattled the nation's conscience. But it wouldn't be the last case of sexual violence to stir a media frenzy. In 2014, two teenage sisters from the Indian state of Bihar went missing after leaving their home to defecate at night. They were later found raped, killed, and hanging from a tree. Nearly 400 rapes could have been avoided in 2012 if women had safe access to toilets, noted a Bihar police chief.

Of course this issue affects Indians far beyond the borders of Bihar. Nationwide, around 70 percent of rural homes don't have toilets. Over 50 percent of the population defecates in the open. Despite the health risks—diseases such as typhoid and cholera can be easily contracted by defecating in open, unsanitary conditions—India is still grappling to come to terms with this reality.

The issue is personal for me. As a woman, I understand what it means to feel unsafe walking down the street. Violence against women is not just a problem in India, but across the globe. According to No Ceilings, one in three women worldwide has experienced physical and sexual violence. This crisis is not about an "uncivilized mindset" of a particular culture. It's about the legacy of a patriarchal and economically inequitable society that affects every single one of us. Our societies, wherein women are paid less than men, allowed fewer political and social privileges than men, and are constantly objectified in popular culture, breed both inequality in access as well as a rape culture that validates violence against women. The inability to access something as basic as a toilet without the fear of being raped speaks to larger systemic issues.

The two major reasons for the lack of sanitation are overcrowding and poverty. In urban slums, people living in informal settlements don't have the space or the sanctioned pipelines to install toilets within their homes. In rural areas, the Indian government has initiated schemes to subsidize building toilets, but people don't always have enough money to meet the remainder of the costs, and often not all the subsidies trickle down.

And simply building toilets doesn't resolve the issue. Many NGOs and aid agencies are well-meaning but out-of-touch, often overlooking the fundamental needs of the people that they attempt to serve.

The most effective strategies for providing women with safe and accessible toilets come from emphasizing community input and including the perspective of Indian women. Hundreds of millions of these women have carved out complicated, diverse, and rich realities. They have found ways to deal with an inequitable social system to achieve a sense of community and solidarity by creating informal women's groups; they have found avenues to channel their creativity and support their families economically by becoming micro entrepreneurs; and they have developed keen insight into how to navigate the natural systems around them in a sustainable fashion. And so, their experiences must be carefully considered and their voices fully heard.

Fortunately, there are members of the international community that are getting it right. The philanthropy, business, government, and NGO leaders who comprise the Clinton Global Initiative do a particularly good job of including girls and women in their solutions to pressing challenges. For example, World Vision recently made a commitment to reach one new person every 10 seconds with clean water and sanitation in or before 2020. To carry this out, World Vision is empowering women to lead local committees that are responsible for managing their respective communities' boreholes, protected springs, and other water points.

Providing women with access to safer toilets will require the efforts of everyone—including me. Through the Clinton Global Initiative University, which President Bill Clinton launched to engage the next generation of leaders, I've made a commitment to work alongside communities in India to address the issues of sexual violence and poor sanitation. By emphasizing the intrinsic link between them, my CGI U Commitment to Action—Mahila Sanasar (Women's Safe Haven)—seeks to create safe sanitation facilities, complete with a toilet, bathing area, and a room for child-care. The facilities will also offer counseling and media-based education on relevant health issues for women and children.

Instead of going at it alone, I am doing what I hope others will as well: using what public health experts call Community Based Participatory Action Research. It's a model through which communities identify their own problems and engage in all the steps of development, from research to implementation, while intervening agencies or researchers act only as facilitators.

What happened to Jyoti in Delhi four years ago has sparked a revolution aimed at ending gender-based violence. The unfortunate reality is that as long as women's bodies are co-opted as weapons to achieve political gain and maintain inequalities, the road to eradicating sexual abuse will be steep. But empowering women with the autonomy and equity that come with safe toilet access is an essential step toward a better world.

For more on the crisis of sanitation and safety, watch the video below: