The terrorist attacks in Paris on November 13, 2015 were the most sophisticated assaults ISIS has ever pulled off beyond the borders of Iraq and Syria, involving three teams carrying out simultaneous suicide, ambush, and hostage attacks.

But the attacks' severity shouldn't distract from just how little of a deviation it really represents from the group's past behavior.

ISIS has never been exclusively focused on building its so-called caliphate, an Islamic state presided over by a religious leader.

It was also focused on waging external attacks long before the events in Paris last week.

As of mid-2015, ISIS had left a trail of attacks in an area spanning thousands of miles: 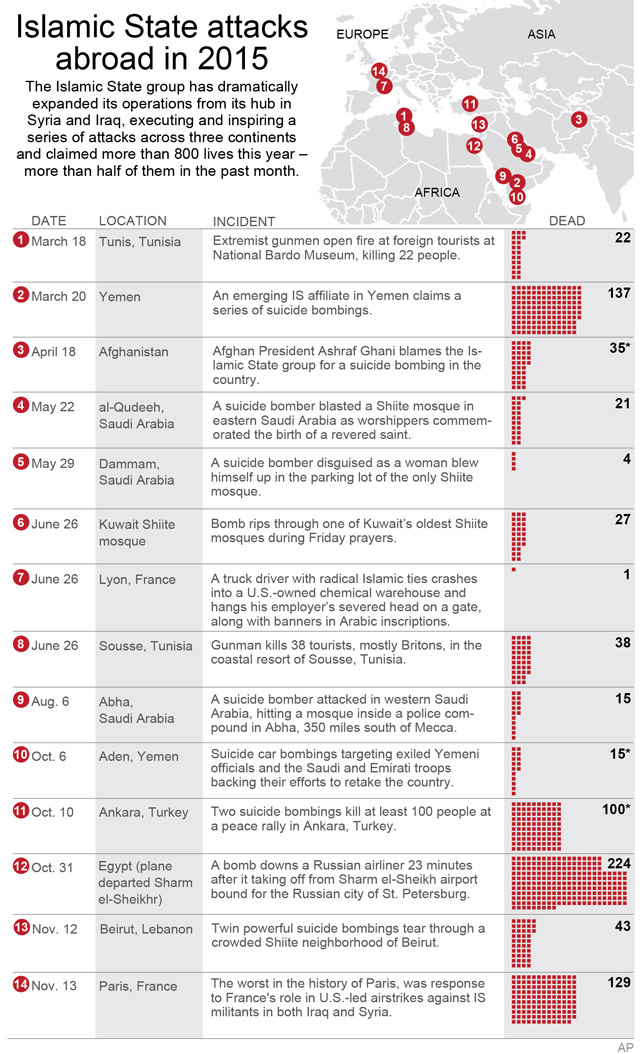 ISIS hasn't had a "change in strategy." It's been consistent in both its actions and its messaging, which has explicitly emphasized attacks on western targets since at least September of 2014.

"Their strategy hasn't shifted," Daveed Gartenstein-Ross, a senior fellow at the Foundation for Defense of Democracies, told Business Insider. "Instead it's their capabilities that have shifted ... They're focused on attacking, everywhere."

The group has pulled off numerous external attacks in recent months. ISIS bombed a mosque in Kuwait on June 26, killing 27 people. ISIS claimed responsibility for suicide bombings at three Saudi mosques between May and August of 2015, including an attack on a mosque belonging to a rapid response security team that killed 13 people.

ISIS-affiliated militants captured parts of Sirte, Libya in March of 2015, and briefly occupied areas of Sheikh Zuweid in the Egyptian Sinai on July 1, 2015, sparking a firefight that left hundreds of militants and dozens of Egyptian soldiers dead. ISIS claimed responsibility for mosque bombings in Yemen that killed 29 people during observance of the Eid holiday in September, while its Afghanistan affiliate beheaded seven civilians in the space of a week earlier this month.

See the string of beheadings by ISIS:

A screen grab from a video posted to YouTube by ISIS that claims to show journalist James Foley, who was abducted in 2012 while covering the Syria civil war, being beheaded.

GlobalPost Journalist James Foley talks about being held by the Libyan Government. Foley was later abducted in Syria and a video by Islamic State militants was released in 2014 that purported to show his killing by the militant group.

Execution of Steven Sotloff by Jihadi John of ISIS. In August 2013, Sotloff was kidnapped in Aleppo, Syria, and held captive by militants from the Islamic State of Iraq and the Levant. Jihadi John (Mohammed Emwazi, born August 1988) a British man who is thought to be the person seen in several videos produced by the Islamic extremist group ISIL showing the beheadings of a number of captives in 2014 and 2015.

A masked, black-clad militant, who has been identified by the Washington Post newspaper as a Briton named Mohammed Emwazi, stands next to a man purported to be David Haines in this still image from a video obtained from SITE Intel Group website February 26, 2015. The "Jihadi John" killer who has featured in several Islamic State beheading videos is Emwazi, a Briton from a middle class family who grew up in London and graduated from college with a degree in computer programming, the Washington Post newspaper said. In videos released by Islamic State (IS), the masked, black-clad militant brandishing a knife and speaking with an English accent appears to have carried out the beheadings of hostages including Americans and Britons. The Washington Post said Emwazi, who used the videos to threaten the West and taunt leaders such as President Barack Obama and British Prime Minister David Cameron, was believed to have travelled to Syria around 2012 and to have later joined IS. British government sources and the police refused to confirm or deny the report, citing a live anti-terrorism investigation, a position mirrored by a spokeswoman for Cameron.

A man makes the victory sign behind a picture of Herve Gourdel, the hiker beheaded by Algerian militants linked to the Islamic State group during a demonstration in support of Kurdish forces fighting against the Islamic State (IS) in Syria on October 2, 2014 in Marseille, southern France.

Screen shot from an Internet video released Friday that purports to show an ISIS militant beheading British aid worker Alan Henning, who had been taken hostage by the extremist group.

The order of service for the memorial service for murdered British aid worker Alan Henning at Eccles Parish Church on November 22, 2014 in Manchester, United Kingdom. The 47-year-old taxi driver was captured in December while delivering food and supplies to Syrian refugees and was murdered by Islamic State (IS) militants in Syria.

Yellow ribbons for murdered British hostage Alan Henning, are attached to trees in the town centre of Eccles, north west England on October 4, 2014. Britain reacted with horror on Saturday to the beheading of hostage Alan Henning, who many had dared to hope might be spared after a cross-community appeal for his release. Prime Minister David Cameron led tributes to the 47-year-old taxi driver who went to the region as a volunteer to deliver aid and whose death was announced by Islamic State jihadists in a video released late Friday.

A man walks past screens displaying a television news programme showing an image of Kenji Goto, one of two Japanese citizens taken captive by Islamic State militants, on a street in Tokyo January 25, 2015. Japanese Prime Minister Shinzo Abe on Sunday called the apparent killing of Japanese captive Haruna Yukawa by Islamic State militants "outrageous and impermissible," and again called for the group to release Goto, the second Japanese national they are holding. The words on the screen read "Japanese hostage incident" (top L) and "a still image posted on YouTube" (top R).

Jordanian youth gather for a candle light vigil to condemn the killing of the two Japanese hostages, Haruna Yukawa and Kenji Goto, by the Islamic State (ISIS) group, in a gesture showing solidairity with Japanese people, in front of the Japanese embassy on February 2, 2015 in Amman, Jordan.

Men in orange jumpsuits purported to be Egyptian Christians held captive by the Islamic State (IS) kneel in front of armed men along a beach said to be near Tripoli, in this still image from an undated video made available on social media on February 15, 2015. Islamic State released the video on Sunday purporting to show the beheading of 21 Egyptian Christians kidnapped in Libya. In the video, militants in black marched the captives to a beach that the group said was near Tripoli. They were forced down onto their knees, then beheaded. Egypt's state news agency MENA quoted the spokesman for the Coptic Church as confirming that 21 Egyptian Christians believed to be held by Islamic State were dead.

A woman cries as she prays for Tomislav Salopek in a local church in Vrpolje village, Croatia, August 12, 2015. An Egyptian group allied to Islamic State has published a photograph it says showed the beheaded body of a Croatian hostage it threatened to kill last week, the SITE monitoring service said on Wednesday. Reuters could not independently verify the authenticity of the picture, which carried a caption that said: "killing of the Croatian hostage, due to his country's participation in the war against Islamic State, after the deadline expired." Last week, an online video purportedly from Sinai Province showed a man who identified himself as Tomislav Salopek and said the group would kill him in 48 hours unless Muslim women in Egyptian jails were freed.

It's known that ISIS was training some of its fighters for attacks in Europe even before the organization's split from Al Qaeda in February of 2014. In January of 2015, BuzzFeed interviewed an ISIS facilitator in Turkey who spoke openly about the group's use of the country to transport militants focused on carrying out attacks on European soil.

ISIS-linked bombers killed over 100 at a peace rally in Ankara, the Turkish capital, on October 10. The attacker who killed four people at the Jewish Museum in Brussels, Belgium on May 24, 2014 had fought with ISIS in Syria. And ISIS elements were likely involved in the January 2015 Paris attacks as well.

ISIS isn't evolving into a group with grim external ambitions. Those ambitions have always been there. The Paris attacks aren't concerning because they suggest a shift in strategy. They're worrying because they show just how much ISIS attack capabilities have evolved.

Those capabilities could be a lingering problem with the potential to outlast ISIS seizure of territory, if earlier precedent is any indication.

Groups with a commitment to external attacks can maintain their capabilities even after suffering major setbacks. The Somali jihadist group al Shabaab launched its two deadliest outside attacks, in Nairobi, Kenya in September of 2013, and in Garissa, Kenya in April of 2015, years after the group had lost control over Somali's capital and coastal regions.

ISIS had a developed external attack strategy and capabilities long before the carnage in Paris -- and they could persist long after the group's Syrian and Iraqi safe haven is reduced.

More from Business Insider:
This is the 'mastermind' behind the Paris attack, authorities say
France says it hit two targets in airstrikes on ISIS capital
2 reasons the Paris attacks were especially alarming