When it comes to age, wealth doesn't discriminate -- billionaires can be found in every phase of life.

Wealth-X, a firm that researches and maintains a database of ultra-wealthy people, compiled a list of the richest person in every decade, from their 20s through their 90s.

From tech billionaires to retail moguls and a secretive heiress, here are the people with more money than anyone else in their age group. Snapchat CEO Evan Spiegel may be the least wealthy person on this list, but he's also the youngest -- and at 25, his net worth of $2 billion has plenty of time to grow. Spiegel began developing his now-you-see-it photo-sharing app in 2011 while still a student at Stanford. Barely two years later, he was getting offers from the likes of Facebook ($3 billion) and Google ($4 billion) to buy him out, both of which CEO Spiegel turned down.

Snapchat's value has continued to soar as the company has branched into news and other media and acquired some companies of its own, coughing up $150 million for app-development company Looksery. Considering Spiegel and company raised $530 million in equity at a $16 billion valuation in May, rejecting Facebook and Google might have been the smartest business move the young billionaire has made yet. At just 31, Facebook founder and CEO Mark Zuckerberg is already one of the richest people in the world with a net worth of $47.2 billion. Facebook continues to thrive, attracting more than a billion users daily in September -- a 17% increase in traffic from the previous year. The company stock hit all-time highs in November after reporting $4.5 billion in quarterly earnings.

Zuckerberg has made some high-profile purchases of late. He reportedly spent $22 million on a new 3,200-square-foot home in New York City's West Village this year, and in 2014 he spent $100 million for 750 acres of secluded land on the North Shore of Kauai.

Zuck and his wife, Priscilla, are also incredibly generous with their wealth. The social media mogul has signed The Giving Pledge, promising to donate at least half of his wealth to charitable causes within his lifetime. The couple donated $25 million in the fight against Ebola last year, and gave $100 million worth of Facebook shares towards improving a New Jersey public-school system. Larry Page became a billionaire when Google went public in 2004 with a valuation of about $23 billion; 11 years later, the company is worth more than $500 billion.

Page and cofounder Sergey Brin -- exceedingly wealthy in his own right with a net worth of $38 billion -- have been shaking their company up lately. In August, Google announced that it would be forming a new parent company, Alphabet, to allow its different businesses to operate independently and move faster. Page and Brin still control the overarching entity as CEO and president, respectively.

Page doesn't make a lot of splashy purchases, but the alternative-energy advocate does own an eco-friendly mansion in Palo Alto that utilizes geothermal energy and rainwater capture. He's also an avid kiteboarder. After two straight quarters of impressive earnings in 2015, Amazon shares have shot up, and so has the net worth of founder and CEO Jeff Bezos. He became the third-richest person in the US in October and now owns a fortune of at least $60 billion, trailing only Bill Gates and Warren Buffett.

Amazon is on fire, raking in profits of $92 million and $79 million in the second and third quarters this year; its stock is up more than 100% year-to-date. The company is dominating the competition in cloud computing through Amazon Web Services, which is used by major organizations including Comcast, Capital One, and the CIA.

Outside of Amazon, Bezos also has his hand in a few personal projects, including Blue Origin, his private space company, which announced its first successful rocket launch in September. Microsoft founder Bill Gates started programming computers when he was only 13 years old, and he cofounded his iconic software company with childhood friend Paul Allen in 1975 after dropping out of Harvard. The company minted Gates a fortune that now exceeds $87 billion.

But in recent years Gates has shifted his focus away from Microsoft, where he's still an advisor, and toward the Bill and Melinda Gates Foundation. He and his wife founded the charity in 2000 after reading an article about curable diseases causing millions of child deaths in developing countries. Since then, the organization has given away $34.5 billion to an array of causes, including efforts to eliminate HIV, malaria and many other infectious diseases. They also support agricultural development, emergency relief, global libraries, urban poverty, and education.

Along with many of his fellow billionaires, Gates has pledged to give away at least half of his wealth to charity after his death through The Giving Pledge, which he and Berkshire Hathaway CEO Warren Buffett created together. 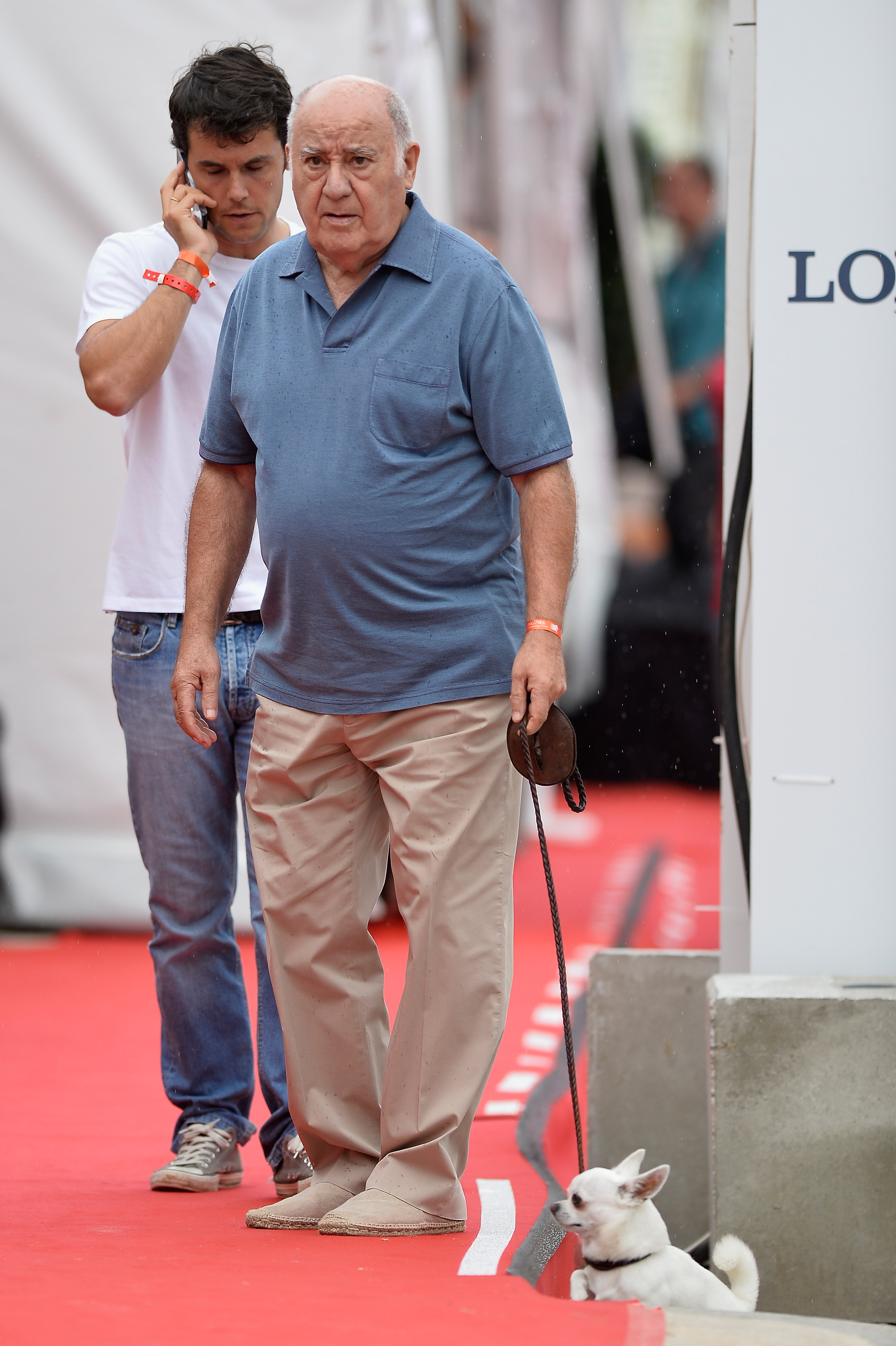 With a net worth of at least $73.2 billion, Amancio Ortega is the second-richest man in the world, thanks primarily to his control of the Spanish fashion behemoth Inditex. He keeps a low profile and dresses modestly, but he still puts his fortune to use: He owns the Torre Picasso, the tallest skyscraper in Spain, as well as The Epic Residences and Hotel in Miami. Like a true billionaire, Ortega also owns a private jet worth $45 million.

His rising wealth this past year is directly tied to Inditex's rapid growth. The company reported a sharp rise in sales and profits and nearly 100 new stores in September, hitting a $100 billion valuation. The company now has nearly 6,800 stores worldwide. The secret to this success is the fast-fashion giant Zara, the company's biggest brand. The chain is changing the landscape of retail as its chic yet affordable designs continue to appeal to demanding customers who constantly crave new styles at low prices. Berkshire Hathaway CEO Warren Buffett bought his first stock at age 11 and never looked back. Since then, Buffett has continued to amass a fortune of more than $62 billionthrough a near-clairvoyant knack for making smart, long-term bets on companies like Coca-Cola and American Express. His company has grown exponentially since he took over in 1964: $1,000 invested in Berkshire Hathaway stock then would be worth more than $10 million today.

He may be the second-richest person in the US, but Buffett doesn't like to show off his enormous wealth. He drives his own car and still lives in the same house he bought in Omaha, Nebraska, in 1958.

Buffett is a friend of Microsoft cofounder Bill Gates, whom he collaborated with on the Giving Pledge, a promise for billionaires to give away at least 50% of their wealth to charity. Buffett has given away nearly $3 billion in each of the past two years, and $21.5 billion in his lifetime. The heiress to the L'Oreal cosmetics fortune and the company's largest shareholder, Liliane Bettencourt is worth more than $31 billion. She no longer has a hand in business operations, but both L'Oreal and the Bettencourt Schueller Foundation she cofounded with her late husband continue to prosper. She's an avid art collector, owning pieces by Picasso, Matisse, and Munch.

Bettencourt's known for more than just her immense wealth though. She's made French headlines in recent years as the central figure in an infamous trial that closed in 2015, in which judges examined whether the billionaire was taken advantage of by those close to her. In May, eight people were convicted of exploiting Bettencourt.

More from Business Insider:
The 50 most powerful people in the world
24 lists everyone should make
21 books by billionaires that will teach you how to run the world