The two black-and-white still images were taken by a neighbor's security camera and show the suspect from behind with a hoodie pulled over his head. 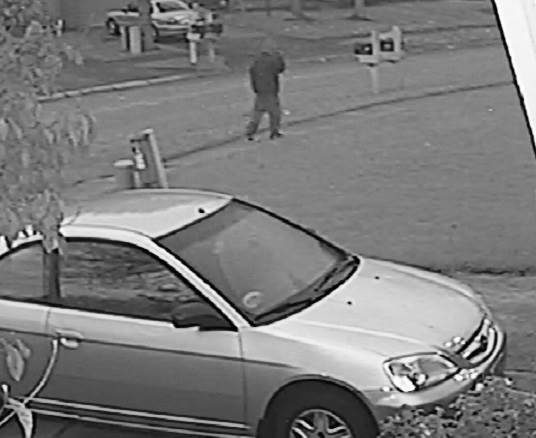 Earlier in the week, police described the man that they believe shot 28-year-old Amanda Blackburn as a black male who is 5-foot-4 to 5-foot-9, with medium to light brown complexion and a slim to medium build.

Spread the Word
He was wearing light pants and a two-toned hoodie with a suede bottom and lighter-colored hood obscuring his face.

Blackburn was shot once in the head on Tuesday morning after her husband, Davey Blackburn, left for the gym shortly at 6:10 a.m. Witnesses told police that they heard gunfire a half-hour later, and a dark-colored SUV was seen speeding away from the scene, though it's unclear if the vehicle is connected to the killing.

During a news conference Friday, police said that more than one person may have been involved in the crime. There were no signs of forced entry, and the couple's toddler was found unharmed in a crib.

See photos of the Blackburns and their child:

Surveillance images released in killing of Indiana pastor's wife
#HH #tillnextyear
This little dude. 💋💋💋
This last year I have fallen more in love with my beautiful wife, @amandagblackburn than I ever imagined I could love someone . . . I'm so incredibly grateful to The Lord that 28 years ago he brought her into this world and orchestrated our lives to intertwine. She is my best friend, my confidante, my rock, and the lift behind God's call on my life. I truly cannot imagine doing life without her. Happy Birthday to the greatest wife on planet earth, the greatest mom any husband could hope for for his kids and the Godliest woman I know!
#halloween @daveyblackburn
Saturdays. 🍁
That Blackburn guy is hott!
Making someone's Thursday morning better by paying for their donuts! But we also had to get some for ourselves. 😏 #ForIndy #randomactsofkindness
Happy 7 years @daveyblackburn! 7 is the perfect number so I'm believing this will be our best year yet! Life with you is fast, intense and stretching...but I've never been more fulfilled! Thank you for leading me and never letting me settle! ❤️
Downtown fireworks! One of our favorite traditions! #happyfourth @daveyblackburn
6 years later and our lives are looking a little bit different...Happy Anniversary to the love of my life! Our adventure continues and I'm so glad I get to do this next part with you, @daveyblackburn! xoxo
Up Next

In a statement released by his church last week, Davey Blackburn said that when he returned home from the gym, he found his wife dead. He has been "ruled out completely" as a person of interest in the case, Indianapolis Police told NBC News last week.

During the news conference, Indianapolis Police Capt. Craig Converse described the killing as a crime of opportunity.

"We believe that the people saw this as a home where they could get in and take some things. It just so happens that Amanda was home ... and she was murdered," Converse said.