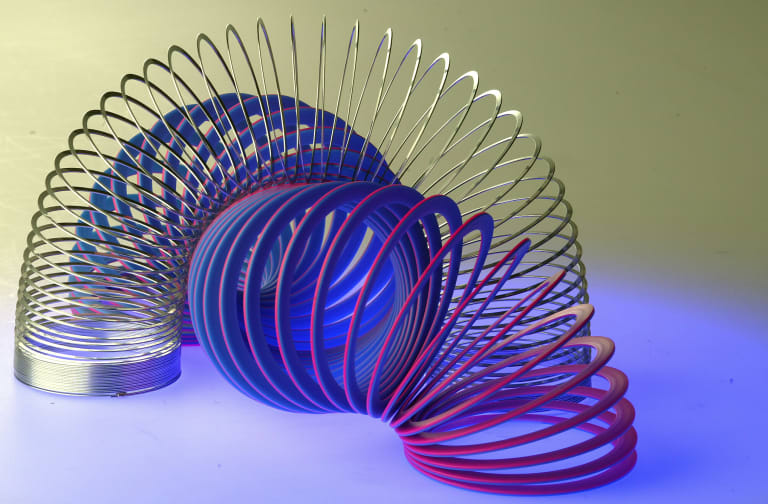 On its 70th anniversary, here's the story of the company that sold 300 million Slinky toys.

We talk a lot about iconic entrepreneurs with great stories--for example, here, here, and here. As we head into the holiday shopping season, however, here's an entrepreneurial story you probably don't know--even though it's about a product you're certainly familiar with.

The year was 1945. World War II had just ended. People had money to spend. Yet a brand new toy that would become one of the most successful ever was stuck on the shelves.

This is the story of the Slinky, which celebrates its 70th anniversary this month. Trust me. It's one of the weirdest startup stories you've ever heard--and maybe one of the most successful.

It starts with Richard James, a Pennsylvania-born mechanical engineer working at a shipbuilding company during the war, who was trying to find a way to keep shipboard instruments in place during rough seas. His idea involved tension springs. He dropped one on by accident; he was enthralled by the way it moved across the room.

More From Inc.com: The Top 50 Women Entrepreneurs in America

It took James a year, but he figured out how to turn the spring into a toy. He borrowed $500--the equivalent of maybe $6,500 today--to finance a run of 400 units in a local machine shop. His wife, Betty, was nervous--but she came up with the name.

They didn't sell. Their brand new company, eventually known as James Industries, was barely hanging on.

Things finally turned when they convinced the Gimbels department store in Philadelphia to let them set up a display, in late November 1945. They built an incline, gathered a crowd, marched the Slinky down the plane. Ninety minutes later, they'd sold 400 units.

Slinky became a sensation--the Cabbage Patch doll or Ninja Turtles of Xbox of its time. In two years, they sold 100 million toys at $1 a head. That's $100 million, of course--and adjusted for inflation it's about a billion dollars worth of toys in today's dollars. By the late 1950s, the Jameses were super-wealthy, and their toy was an icon.

The story doesn't end there, however. In 1960, at the height of the Slinky's popularity, the Jameses got divorced, and Richard James took off. Reportedly, he joined a religious organization in Bolivia called Wycliffe Bible Translators, which had the goal of translating the Bible into every language in the world. He never returned.

With his departure, Betty took over the company for the next 38 years. As one history of the company put it:

Left with the responsibility of six children and now a floundering business, Betty James began a rebirth of the Slinky dream by relocating the factory to her hometown of Hollidaysburg, a small town adjacent to Altoona. By 1960, Betty had a unique co-op advertising plan in full swing, aided by the production of a "jingle" that is still the sound behind Slinkytelevision commercials.

More From Inc.com: Here's What Really Happened at ThatCompany That Set a $70,000 Minimum Wage

Slinky sales continued to increase through the years and a number of new items were added to the James Industries line of toys. In 1990, a national survey by a publication revealed that 89.8 percent of the people in America knew what a Slinky was or were familiar with the jingle.

Oh right, the jingle. This one:

The Slinky wound up on top 10 toy lists of the 20th century for both The Discovery Channel and The History Channel, and the U.S. Postal Service honored it on a commemorative stamp. In 1985, astronauts on the Space Shuttle Discovery experimented with it and found that the Slinky doesn't behave the same way in zero gravity. ("It sort of droops," one of the astronauts said.)

Over the years, there were slumps in sales--and rebounds, like the one in 1995 after the movie Toy Story included a Slinky dog character, prompting 800,000 units sold. Richard James dies in Bolivia in 1974. Betty ran the company until 1998, when she finally sold to a company called Poof Products (now renamed Poof-Slinky).

When Betty died in 2008, the New York Times reported that the heat of Poof-Slinky wouldn't disclose the company's revenue. But more than 300 million Slinkys have been sold over the years, just a shade under one for each modern day American.

More From Inc.com: 8 Morning Rituals of the Most Successful People

Having raised six children largely on her own and also enjoying a gaggle of grandchildren, Mrs. James was adamant about keeping the original Slinky affordable. In 1996, when the price ranged from $1.89 to $2.69, she told The New York Times: "So many children can't have expensive toys, and I feel a real obligation to them. I'm appalled when I go Christmas shopping and $60 to $80 for a toy is nothing. With 16 grandchildren you can go into the national debt."

More from AOL.com:
More women are staying home with mom and dad
Gwyneth Paltrow's next role: Book publisher
This simple formula will tell you what to pay every employee