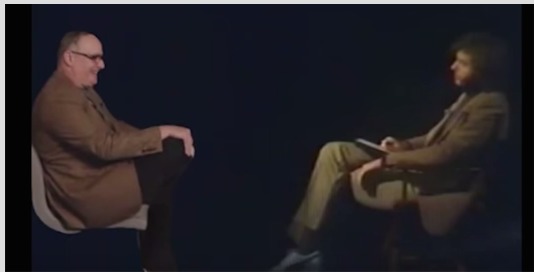 In 1977, 18-year-old Peter Emshwiller catapulted himself 38 years into the future.

Emshwiller, now 56, recently sat down with his 18-year-old self in a prerecorded interview to answer the philosophical questions that plagued him nearly 4 decades ago: Are you exceedingly rich? What's happened with the family? Why don't you tell me something that I never would have guessed?

"When I was a kid, I thought I could do anything," Emshwiller says. "What if you could really talk to your younger self? What would you say?"

In preparation for his inevitable "super" fame, Emshwiller explains that he preemptively recorded hours of video asking his older self questions about his life.

The interview switches between a lighthearted and comedically self-aware disposition, and a raw and contemplative one.

Although there is clearly much more to come in Emshwiller's self-discovery, the already-released segment gives insight into the physical and emotional journey we all take through life, and promises a philosophical experience for everyone in the soon-to-come full interview called 'Later That Same Life.'

For more self-discovery inspiration, watch this video below: