Earth survived a near miss with a "dead comet" this week, just in time for Halloween.

Fittingly, the comet looks a lot like a human skull.

Read: At 82 This 'Star Trek' Actress Is Joining NASA Mission Months After Stroke

Dubbed 2015 TB145 just days ago on Oct. 10 by the University of Hawaii Panoramic Survey Telescope and Rapid Response System (STARRS-1), the object is 1,300 feet wide, or about the height of the Empire State Building.

According to NASA, that makes the "Halloween comet" the largest object to come this close to Earth since 2006. 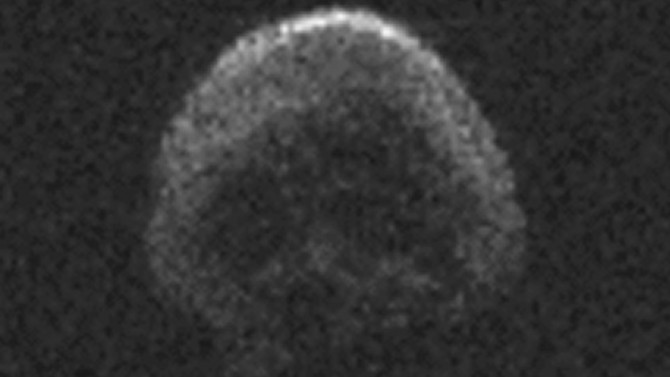 While first spotted by STARRS-1, it was the National Science Foundation's 1,000-foot Arecibo Observatory in Puerto Rico that generated the ghoulish radar telescope images.

"Data may indicate that the object might be a dead comet, but in the Arecibo images it appears to have donned a skull costume for its Halloween flyby," Kelly Fast, IRTF program scientist at NASA Headquarters and acting program manager for NASA's NEO Observations Program said in a NASA Jet Propulsion Lab release.

Scientists concluded that the object is a dead comet after measuring how much light it reflects from the sun.

Photos of the most iconic moments in space travel:

While the object is not visible with the naked eye, researchers planned to use its near Earth flyby to test new radar techniques that would show the comet--which some have nicknamed "Spooky"--in even greater detail.

Watch Below: NASA Scientists Reveal Water Has Been Found on Mars