Biden would enter 2016 race as most popular candidate: poll

Joe Biden hasn't yet announced his plans for a 2016 White House bid, but a new poll shows that he would enter the race as the most popular presidential candidate if he chose to toss his hat into the ring.

According to a new NBC News/Wall Street Journal poll, 40 percent of Americans have a positive impression of Biden, while 28 percent have a negative impression (+12).

Biden would enter 2016 race as most popular candidate: poll
NEW YORK - SEPTEMBER 10: Stephen talks with Vice President Joe Biden, on The Late Show with Stephen Colbert, Thursday Sept 10, 2015 on the CBS Television Network. (Photo by Jeffrey R. Staab/CBS via Getty Images)
Up Next

In a hypothetical matchup with Donald Trump, Sanders would also handily defeat the real estate mogul, getting 52 percent of the general election vote compared to Trump's 36 percent.

Part of Biden's current popularity is almost certainly attributable to the fact that he's not officially in the 2016 race. Most of the media coverage of the vice president's potential run has centered around his decision-making about a campaign and the outpouring of sympathy for his family after the tragic death of his son, Beau. None of his potential rivals have aggressively attacked his record, including past gaffes and previously held policy positions that might now be anathema to the Democratic Party's progressives.

"History has shown that the public has a much harsher filter when people become candidates," says Republican pollster Bill McInturff, who conducted the poll along with Democratic pollster Peter Hart.

If Biden chooses not to pursue a run for president, Clinton's lead with Democrats would jump. Fifty-three percent of Democratic primary voters say they'd support Clinton without Biden in the race, compared to 38 percent who would back Sanders. 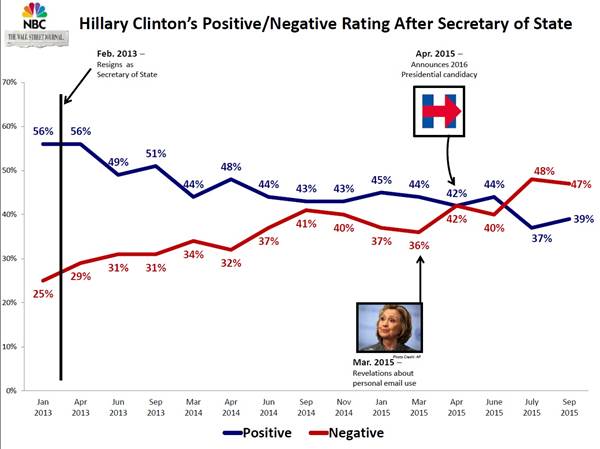 The NBC/WSJ poll was conducted Sept. 20-24 of 1,000 adults (including nearly 400 reached by cell phone), and it has an overall margin of error of plus-minus 3.1 percentage points.