A version of this story first appeared in the Sept. 25 issue of The Hollywood Reporter magazine. To receive the magazine, click here to subscribe.

Dethroning Jimmy Fallon is no easy task. Late-night's reigning No. 1 got his first taste of serious competition since taking over NBC's Tonight with the post-Labor Day launch of Stephen Colbert's TheLate Show on CBS.

After a banner premiere, Colbert quickly assumed second-place status as Fallon nearly doubled his demo score with bold-faced bookings Justin Timberlake and Donald Trump -; proving, as many insiders assumed, that moving the dial on late-night's longstanding hierarchy is not something that will happen overnight.

Colbert, boasting a more handsome lead over ABC's Jimmy Kimmel than his predecessor David Letterman had, proved to be a consistent draw between the second and fourth nights. And his often wonky choice of guests -; Justice Stephen Breyer, Apple CEO Tim Cook and United Nations Secretary-General Ban Ki-Moon are all on the schedule for week two -; show that the Comedy Central alum is not trying to retread the broadcast's familiar late-night format.

Still, the host will make his own play for Trump ratings by month's end. The current GOP presidential frontrunner, and odd viewer magnet, is set to be interviewed by Colbert on Sept. 22. 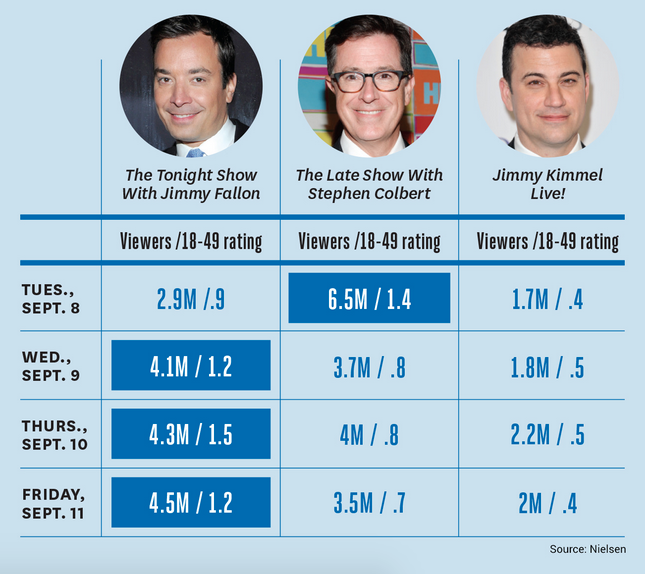 More on The Hollywood Reporter:
Michael Wolff on Donald Trump's shrewd two-timing of Fox News and CNN
Why 'Celebrity Apprentice' said "You're Hired!" to Arnold Schwarzenegger
'Maze Runner: The Scorch Trials': Why its horror scenes barely escaped an R-rating