Happy birthday, Arnold Schwarzenegger! Take a look back at some of his biggest career moments

There aren't enough positive adjectives to describe the man that is Arnold Schwarzenegger, but today the man of many accomplishments is celebrating his 68th birthday.

Arnold has had an incredible career -- one of impeccable longevity -- to say the least. The 68-year-old has owned iconic roles in films like "The Terminator," was elected governor of the state of California, dabbled in countless activist and philanthropic efforts, and was one of the world's greatest bodybuilders. Intuitively, he is one of the biggest household names known around the world.

To celebrate his birthday, take a look back at some of the biggest moments in Arnold's career: 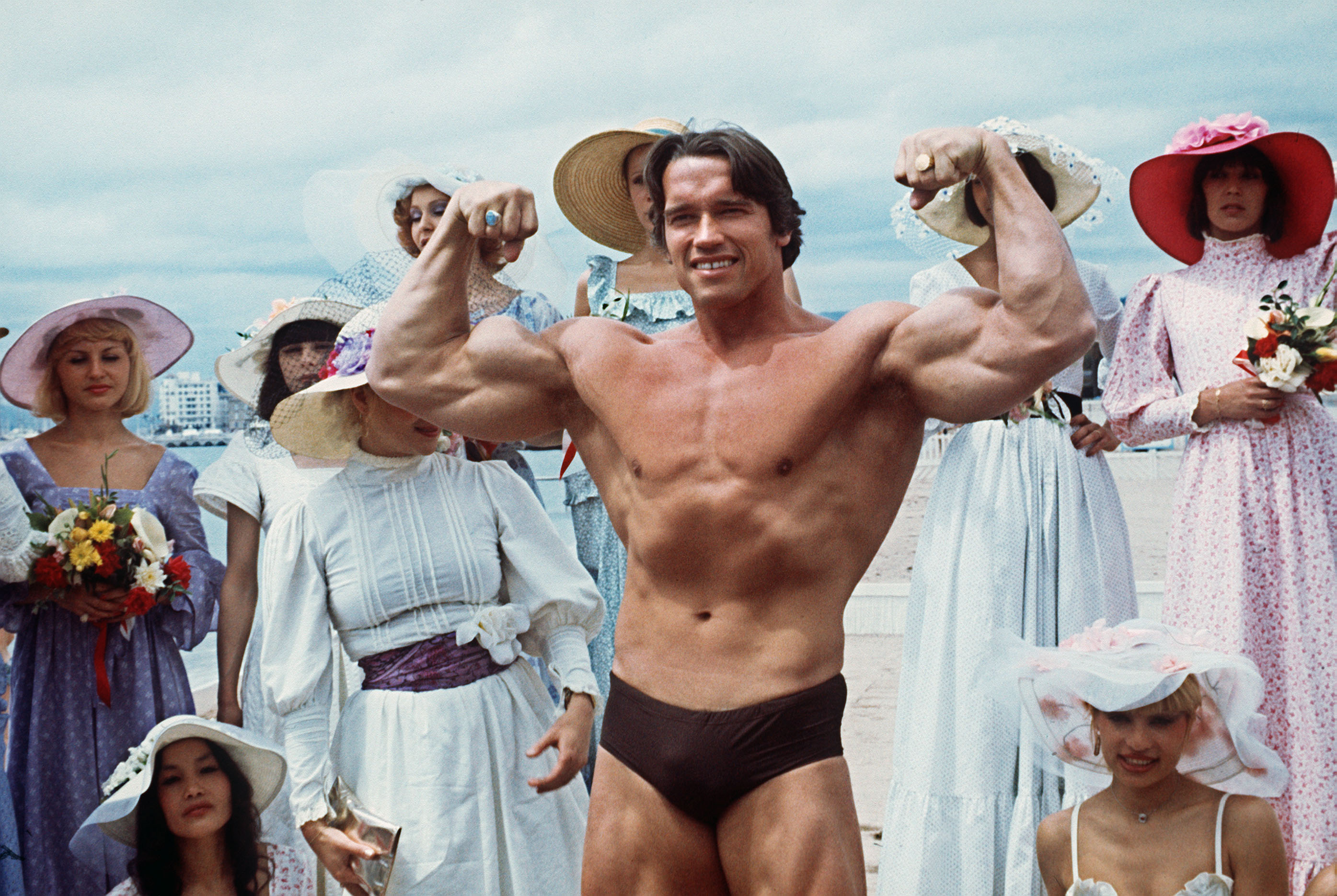 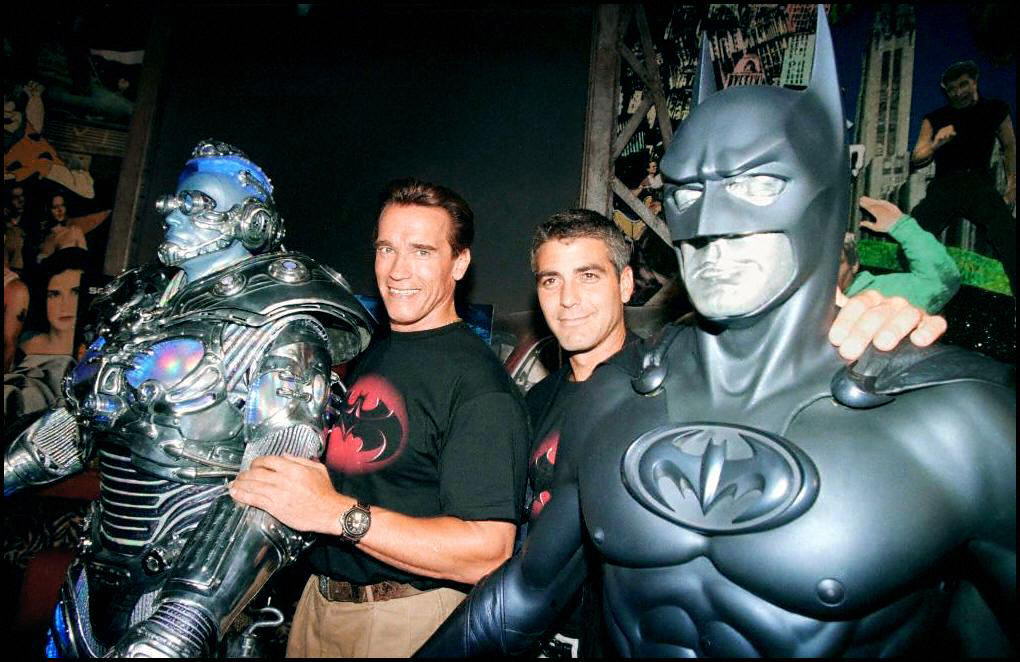 Stars of the film "Batman & Robin," Arnold Schwarzenegger and George Clooney pose with their costumes Mr. Freeze and Batman at Planet Hollywood in Beverly Hills, where the costumes will be on permanent display. (Photo credit: MIKE NELSON/AFP/Getty Images) 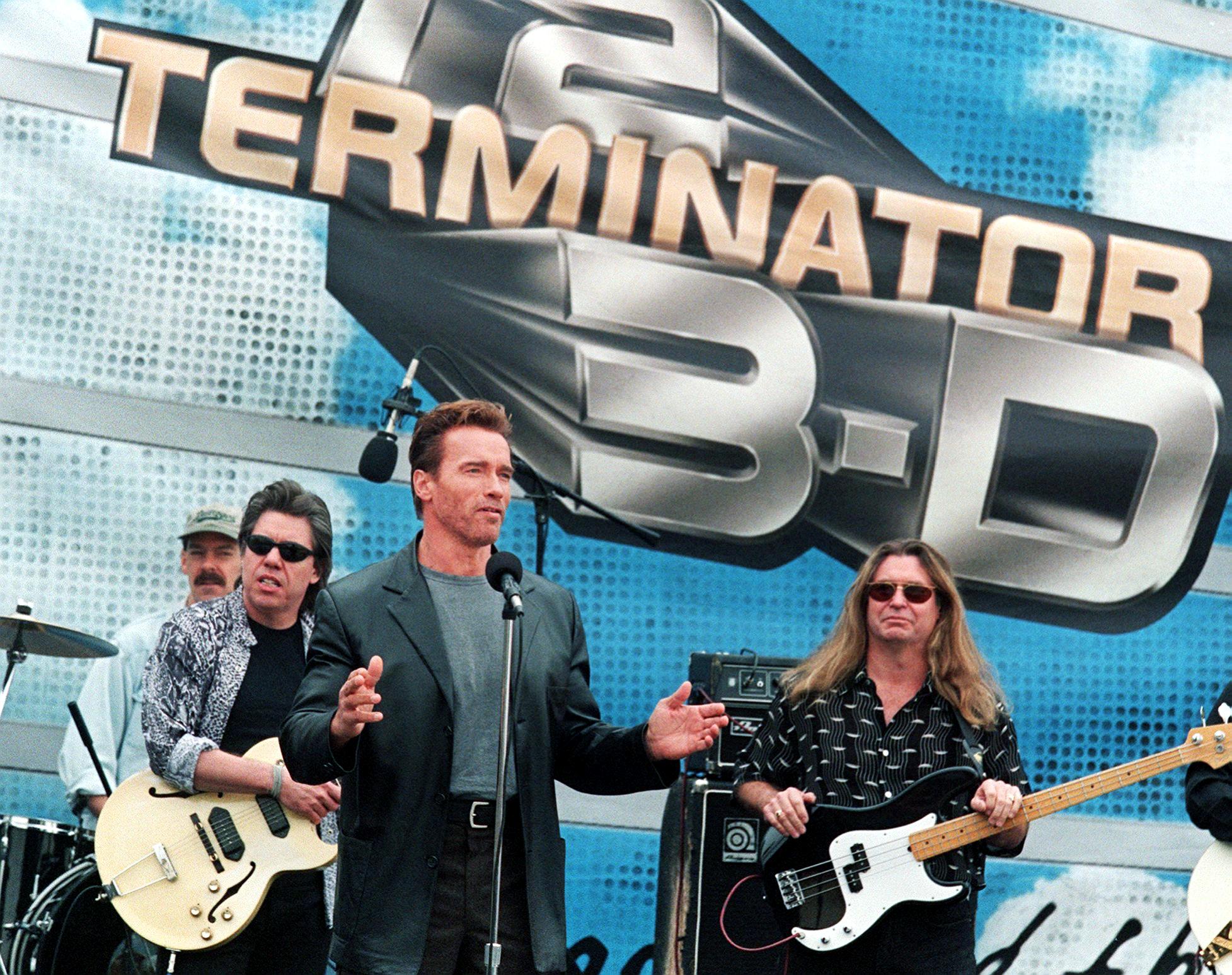 Arnold Schwarzenegger introduces musician George Thorogood and the Destroyers after launching the attraction 'Terminator 2: 3D' at Universal Studios in Hollywood, California. Schwarzenegger, who starred in both Terminator films, was on hand to unveil the new theme park attraction, which fuses live action stunts with the most sophisticated three-dimensional projection system ever created for a theatre. (Photo credit: Vince Bucci/AFP/Getty Images) 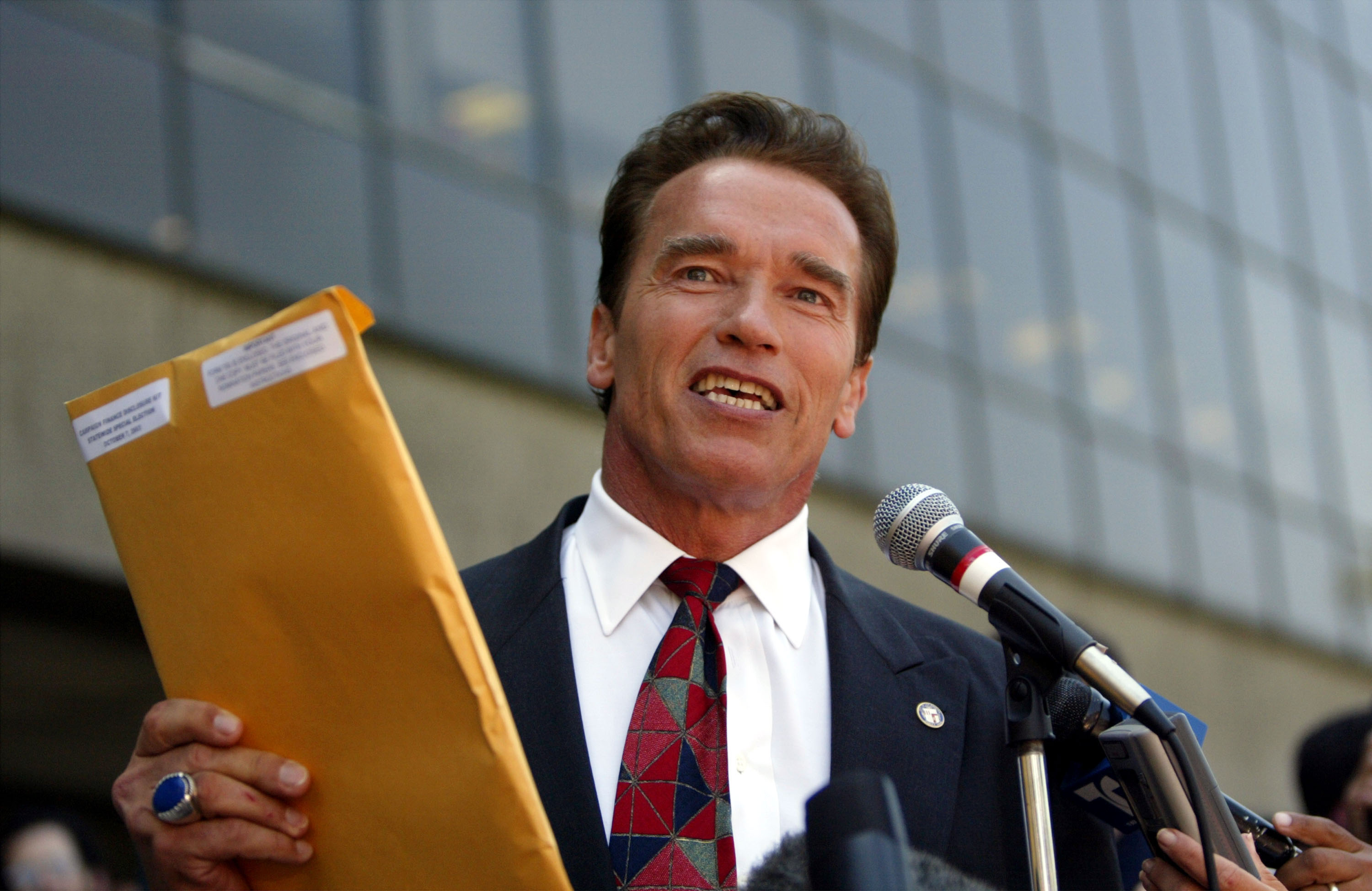 Arnold Schwarzenegger holds the papers he pulled at the Los Angeles County Registar's office to enter the race to unseat current democratic Governor Gray Davis in the recall election on August 7, 2003 in Norwalk, California. Schwarzenegger announced his run for governor August 6 on the Tonight Show with Jay Leno. (Photo credit: David McNew/Getty Images) 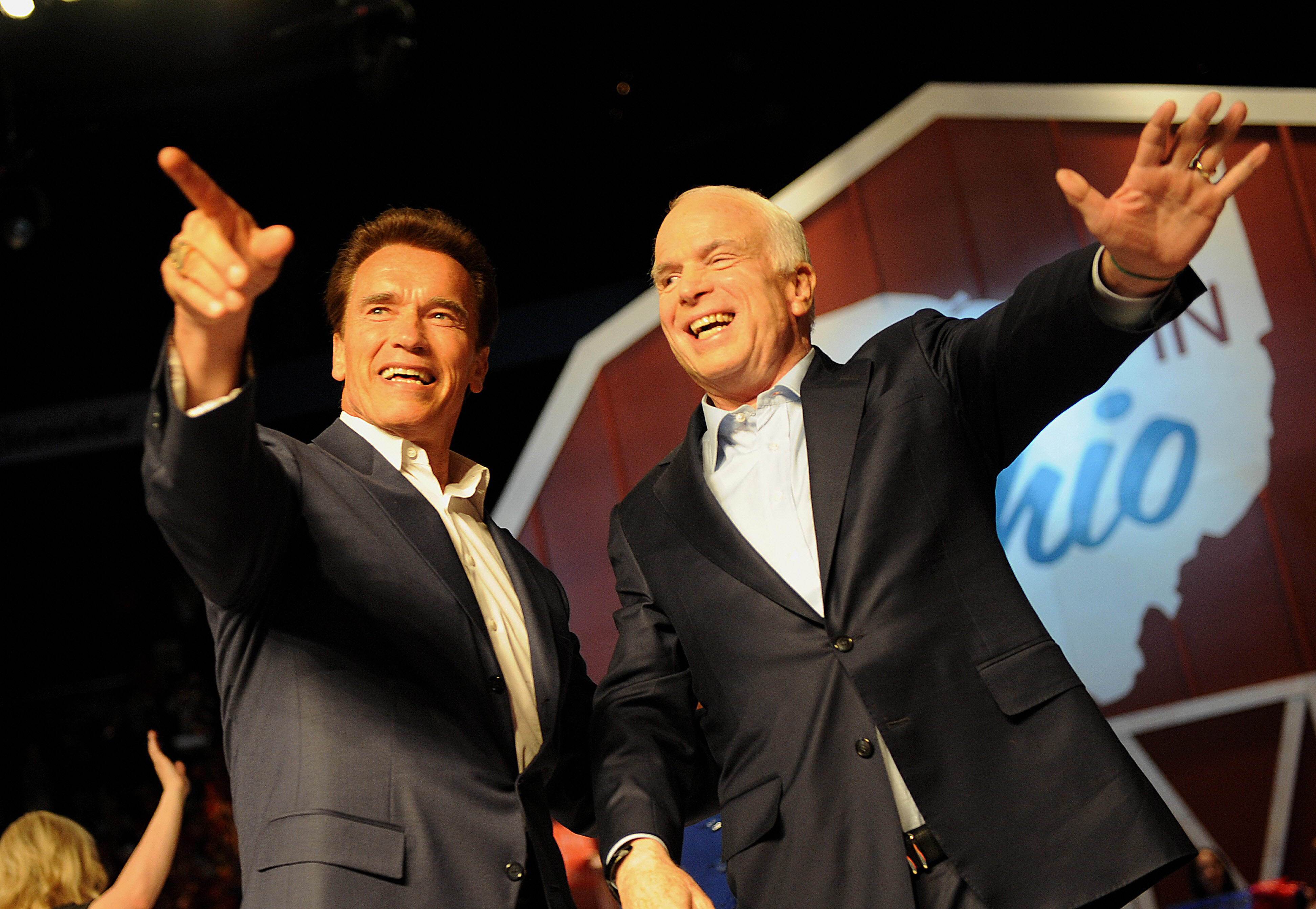 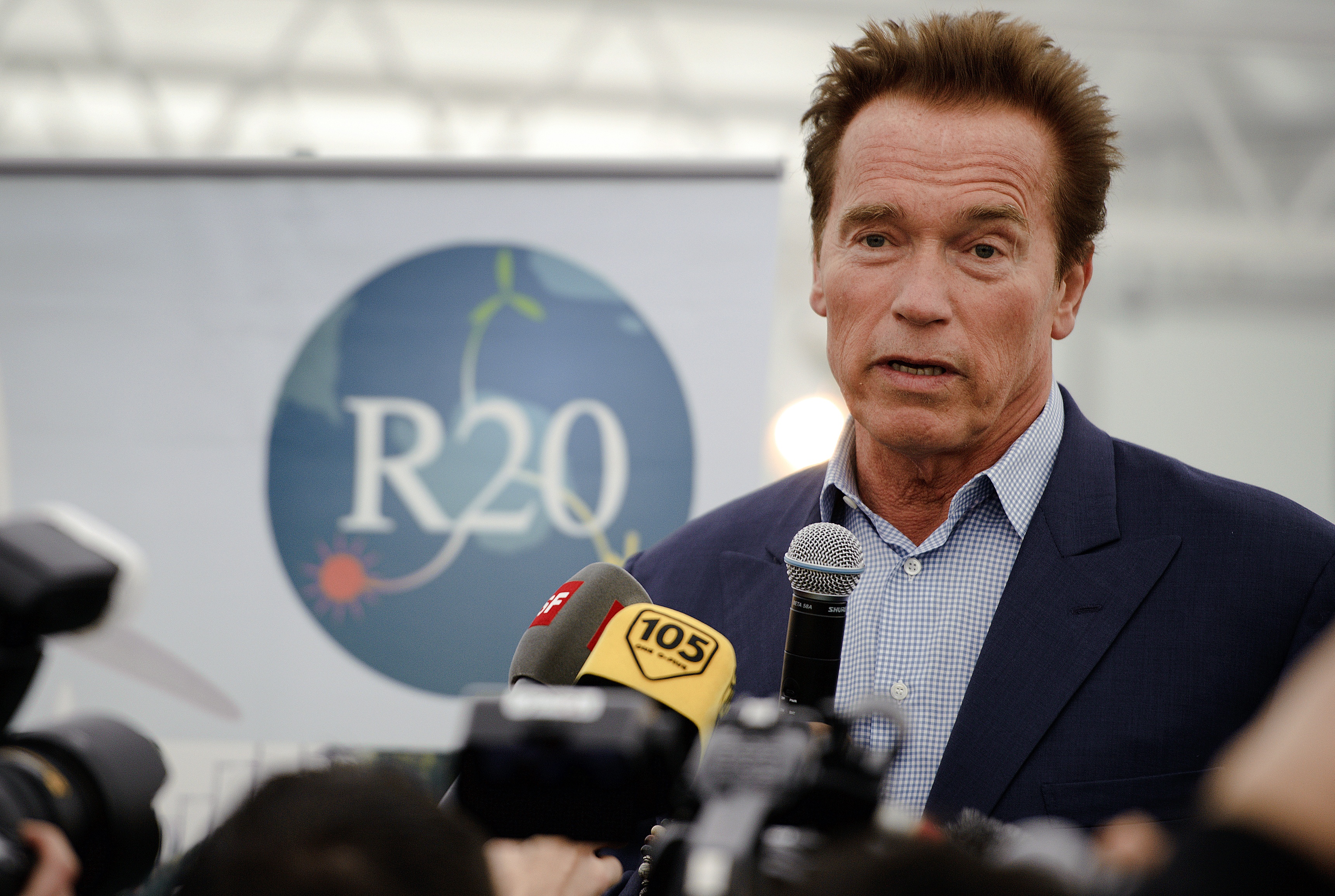 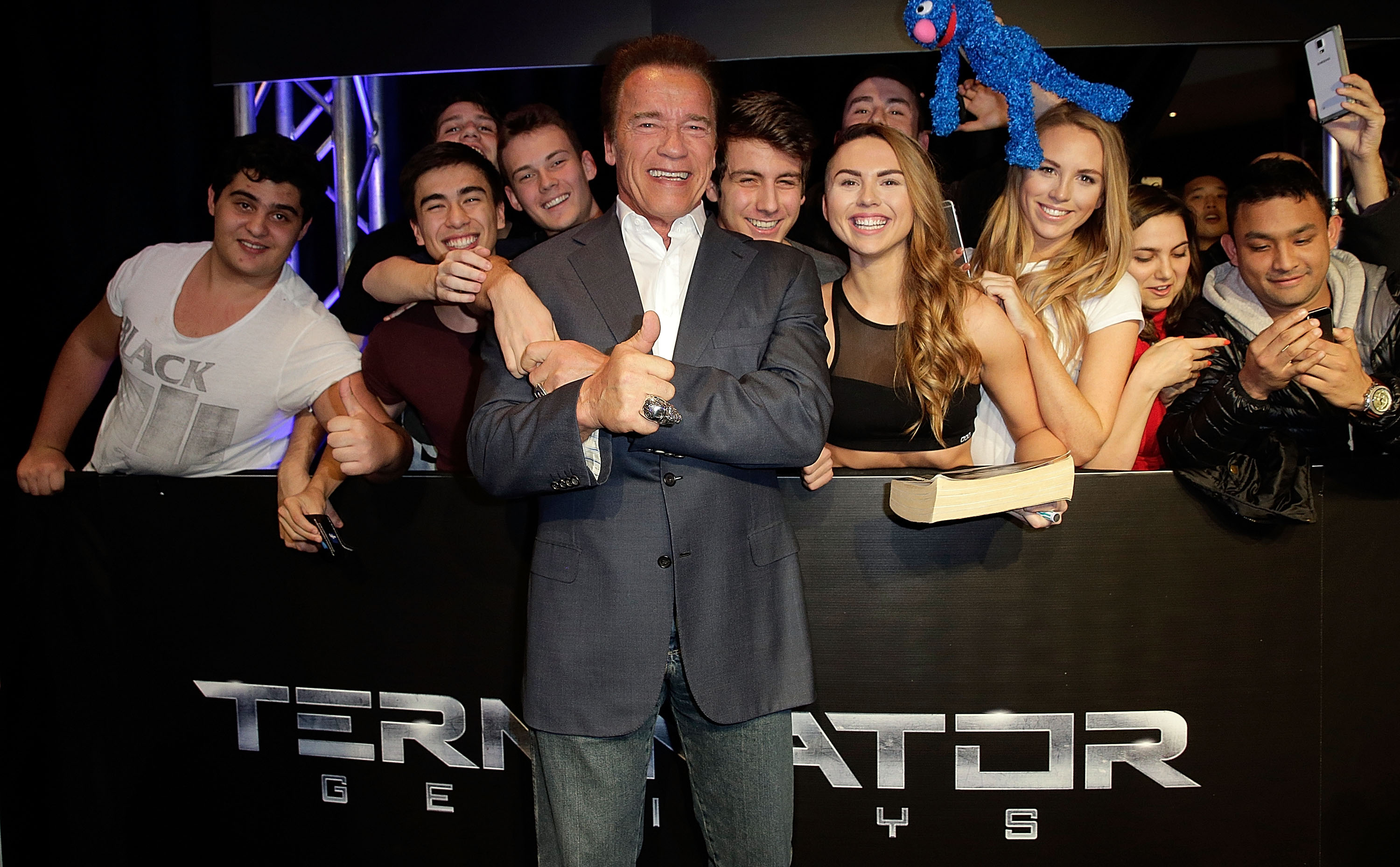 Happy birthday, Arnold Schwarzenegger! Take a look back at some of his biggest career moments
Actor Arnold Schwarzenegger poses at a premiere for "The 15:17 to Paris" in Burbank, California, U.S., February 5, 2018. REUTERS/Mario Anzuoni
"My body. *My* choice!"
As a kid himself!
LOS ANGELES, CA - SEPTEMBER 08: Actor and former California Governor Arnold Schwarzenegger and his daughter Katherine attend Trust Your Senses At DVF for Fashion's Night Out on September 8, 2011 in Los Angeles, California. (Photo by Amanda Edwards/Getty Images for DVF)
NEW ORLEANS - FEBRUARY 16: (LtoR) California governor Arnold Schwarzenegger with son Patrick Schwarzenegger, Maria Shriver and Christopher Schwarzenegger watch during NBA All-Star Saturday Night part of 2008 NBA All-Star Weekend at the New Orleans Arena on February 16, 2008 in New Orleans, Louisiana. (Photo by Bryan Bedder/Getty Images)
UNITED STATES - NOVEMBER 16: Arnold Schwarzenegger and wife Maria Shriver are on hand at the Plaza Hotel where he was honored with a Global Youth Peace & Tolerance Award. (Photo by Richard Corkery/NY Daily News Archive via Getty Images)
|color, horizontal, exterior, center, lifestyle, family, playful, fun, balance, weekend, living, menuez, children, boy, girl, brother, sister, adult, woman, man, mother, father, playing, balancing, suspending, american, green, pink, blue, white|
|color, horizontal, exterior, center, lifestyle, children, doll, recreation, weekend, living, menuez, children, girl, doll, toy, caucasian, african american, people, playing, ribbon, blue, green, red, brown, pink|
E366553 3/26/00 Los Angeles, Ca. Arnold Schwarzenegger And Wife Maria Shriver At The 72Nd Annual Academy Awards. Dave Mcnewonline Usa Inc. (Photo By David Mcnew/Getty Images)
368141 12: ***ESCLUSIVE*** Arnold Schwarzenegger plays in the hotel swimming pool with one of his daughters during an Easter vacation April 21, 2000 in Maui, Hawaii. (Photo by Chris Morton/Online USA)
BEIJING - MAY 19: (NO U.S. TABLOID SALES) Actor Arnold Schwarzenegger and his wife, television journalist Maria Shriver, visit the Forbidden City during a Special Olympics Event May 19, 2000 in Beijing, China. (Photo by David Hume Kennerly/Getty Images)
Arnold Schwarzenegger & Family during Hollywood Celebrity Families turn out to Celebrate Old Navy and P.S. Arts Partnership at Old Navy Store in Santa Monica, California, United States. (Photo by SGranitz/WireImage)
399207 01: Actor Arnold Schwarzenegger and his son, Patrick, pose in front of an F-22 Raptor with airmen in this undated recent photo at Edwards Air Force Base in California. In a recent poll, military members voted Schwarzenegger the star they would most like to meet. (Photo by Stacee McCausland/USAF/Getty Images)
SACRAMENTO, CALIFORNIA - NOVEMBER 17: California Governor-elect Arnold Schwarzenegger walks with his wife Maria Shriver and their four children to his inaugural ceremony at the State Capitol in Sacramento on Novemeber 17, 2003 in Sacramento, California. (Photo by Lucy Nicholson-Pool/Getty Images)
UNITED STATES - MAY 01: Eunice Shriver with daughter Maria, Arnold Schwarzenegger and some of her grandchildren attending the National Center on Poverty Law's Tribute to Sargent Shriver at the Beverly Hilton Hotel in Beverly Hills, CA 05/01/03 (Photo by Vinnie Zuffante/Getty Images)
BEVERLY HILLS, UNITED STATES: Actor Arnold Schwarzenegger(2nd from R) and his wife Maria Shriver(R) arrive at the premiere of the Steven Spielberg movie 'Amistad' with family members Bobby Shriver(L), Timothy Shriver(2nd from L) and his wife(C) 08 December in Beverly Hills. The film about a slave ship revolt stars Morgan Freeman and Anthony Hopkins. AFP PHOTO Vince BUCCI/mn (Photo credit should read Vince Bucci/AFP/Getty Images)
"Money doesn't make you happy. I now have $50 million but I was just as happy when I had $48 million."
"My body is like breakfast, lunch, and dinner. I don't think about it, I just have it."
"The mind is the limit. As long as the mind can envision the fact that you can do something, you can do it, as long as you really believe 100 percent."
"Milk is for babies. When you grow up you have to drink beer."
"I have to give the audiences what they enjoy seeing while I try to bring in a little something new"
"Strength does not come from winning. Your struggles develop your strengths. When you go through hardships and decide not to surrender, that is strength."
"You know, nothing is more important than education, because nowhere are our stakes higher; our future depends on the quality of education of our children today."
"People should make up their own mind about what they think of me."
Austrian Chancellor Sebastian Kurz talks to actor Arnold Schwarzenegger in his office in Vienna, Austria January 24, 2018. REUTERS/Heinz-Peter Bader
Arnold Schwarzenegger helps Daimler CEO Dieter Zetsche at a news conference to unveil new Mercedes G-Class models at the North American International Auto Show in Detroit, Michigan, U.S. January 14, 2018. REUTERS/Jonathan Ernst
Arnold Schwarzenegger and Linda Hamilton