This day in sports history: USFL is awarded $1 in antitrust case against NFL

It may be tough to fathom today, but in the early 1980s, the NFL had serious competition from a rival pro football league. The USFL, founded in 1982, was a spring/summer league that managed to sway some of the NCAA's best talent away from the NFL.

Sporting the talents of Herschel Walker and Jim Kelly, the league eventually expanded to eight teams in just a handful of seasons. Its highlights aired regularly on ESPN, and players even appeared on their very own trading cards.

While its rapid rise to prominence was, and remains, unheralded in major pro sports, the USFL burned down even quicker than it was built.

Just four years after its inception, the league found itself inevitably batting the NFL in court. In fact, it even managed to convince a jury that the NFL was guilty of monopolizing pro football in America.

The decision came just months before the league was set to open its first fall season -- competing head-to-head with the NFL.

The six-member jury determined that the NFL was a "duly adjudicated illegal monopoly," but was not guilty of the primary claim the USFL insisted: bullying the major television networks into refusing to air USFL games.

Four days after the ruling, the league announced it would suspend operation for the 1986 fall season, with the intention of returning for 1987. Roughly $160 million in debt, and with most of its players under contract with NFL teams, the USFL extended its hiatus through 1987. It would never host another game again. 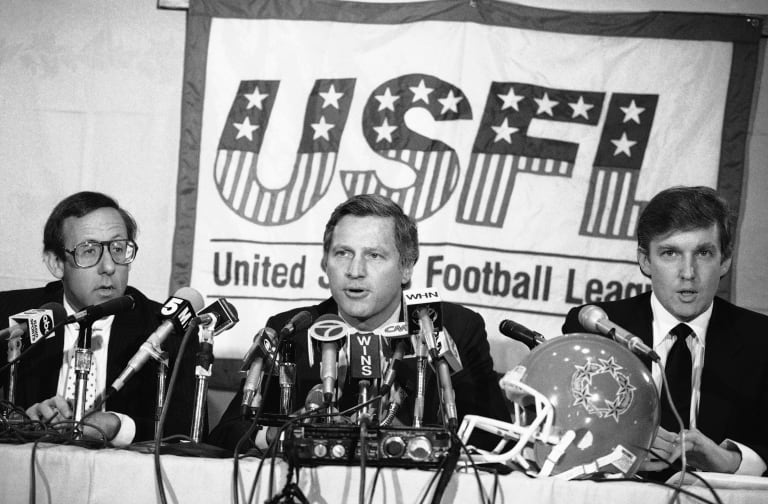 The ill-fated move to the fall season was the brainchild of Donald Trump, then owner of the New Jersey Generals. He was an advocate for the move as early as 1983, as soon as the league wrapped up its first spring season.

"If God wanted football in the spring," Trump said, "he wouldn't have created baseball."

With several teams in financial trouble, the USFL's attempt to go head-to-head with the NFL in court was viewed as a last-ditch effort to finance the league.

That dollar prize, though, just wasn't enough. The USFL was no more by 1987, and the NFL has gone unchallenged ever since.

Click through the gallery below to relive the USFL's brief history:

This day in sports history: USFL is awarded $1 in antitrust case against NFL
FEBRUARY 1985: Quarterback Jim Kelly #12 of the Houston Gamblers scrambles during a 1985 season USFL game. (Photo by Stephen Dunn/Getty Images)
Up Next