These boys got so sunburned they were airlifted to a hospital

Two boys were sunburned so badly during a day care field trip to an Oklahoma water park that they were airlifted to a Texas children's hospital.

The injuries were so substantial that photos of the boys with their burns were deemed too graphic to be posted in the GoFundMe page the family set up. Family member Jerry Broadway wrote on the page:

"That should give you an idea of the seriousness of the burns."

Shaunna Broadway was furious to find her boys, 7-year-old Conner and 5-year-old Trey, painfully sunburned when she picked them up from day care on Friday. Both boys were reportedly crying because large blisters had emerged on their backs and shoulders. 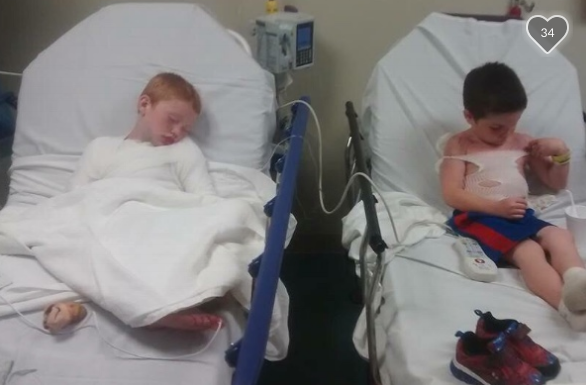 The day care, Happiness Is a Learning Center, held a field trip at Splash Pad for the children on Friday. The employees reportedly did not bring any sunscreen to protect the kids from the nearly 110 degree heat. Shaunna told BuzzFeed:

"I got off work at 5 p.m. and went to pick them up, and they were clearly burned. (The employees) were actually making fun of my older son, because both boys got sunburns but he was being a 'baby' and crying about it."

Conner suffered third-degree burns and Trey had second-degree burns. As the symptoms got increasingly worse, the boys were taken to three different area hospitals over the course of the weekend. Finally, they were flown to Shriners Hospital for Children in Galveston, Texas.

The family reportedly filed a report with Vinita Police on Sunday. KOTV reported that Happiness Is a Learning Center has been cited 19 times for infractions by the State Department of Human Services over the past year. Jerry wrote on the GoFundMe page:

"No child should have to endure this pain, especially due to the negligence of their caretakers."

Vignette Police are currently reviewing videos from he facility to see if the incident was a result of neglect or child abuse. Officer Bobby Floyd told BuzzFeed:

"We are investigating the criminal element of neglect with the Oklahoma Department of Human Services."

Both boys are expected to be in the hospital for the remainder of the week.

More from AOL.com:
Why today's debut of Dr. Seuss' new book is such a big deal
Heroic woman saved her child before being swallowed by an escalator
Watch this wedding guest drop a child to catch the bouquet