MODESTO, Calif. (AP) — A central California man accused of killing his mother, baby daughter and three others was about to be charged with the death last year of young boy when the five bodies were discovered, police said.

Martin "Marty" Martinez had been under investigation since the Oct. 2 death of a toddler whose mother, Dr. Amanda Crews, was among the victims found Saturday afternoon in the Modesto home Martinez used to share with her. Authorities have not determined a motive or released how the five, including two girls, died.

Child Protective Services had ordered Martinez, 30, to stay away from Crews' surviving children, but the pair's relationship status at the time was not clear.

"We do not believe that played a factor in this incident," Modesto Police Chief Galen Carroll said of the order. 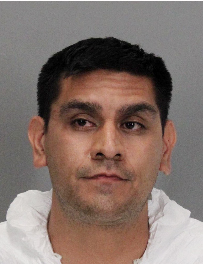 A pathologist concluded last week that 2-year-old Christopher Ripley died of blunt-force trauma to the head two days after he was taken to a hospital, Carroll said at a news conference Monday.

Police got a warrant to arrest Martinez in the boy's death Saturday night — after the bodies were found, Carroll said. They didn't get it earlier because they were waiting for the pathologist's written report, he said.

"The Modesto Police did not drop the ball," Carroll said, adding that the investigation into Christopher's death took nine months because the department had to hire an outside pathologist who specializes in neurology.

A "limited" number of law enforcement officials knew the pathologist told police Thursday that Christopher was killed, the police chief said. He believes Martinez did not know of the pathologist's report.

The arrest warrant for Martinez says the pathologist found the "method of death was consistent with Christopher's head hitting the tile floor as a result of abuse," the Modesto Bee reported.

The toddler's day care reported he suffered three suspicious injuries around the time he began potty training. Crews, 38, denied Martinez caused the injuries but acknowledged that he was present during two of them, according to the warrant.

Crews worked for the Stanislaus County Health Service Agency, according to the California Medical Board. The agency didn't return several phone calls.

Authorities found the five bodies around 3:30 p.m. Saturday after receiving a call asking for a check of the home in an upscale subdivision. A group of law enforcement officials were seen huddling together and praying in front of the house shortly after the grisly discovery.