McGorry stars in the Netflix phenomenon, "Orange is the New Black," and has been rocking his Twitter and Instagram game lately. His latest coup came when he schooled the Twitterverse on the controversial topic of #AllLivesMatter versus #BlackLivesMatter. He fired off the tweets one after another (10 in total).

This is by far the best: 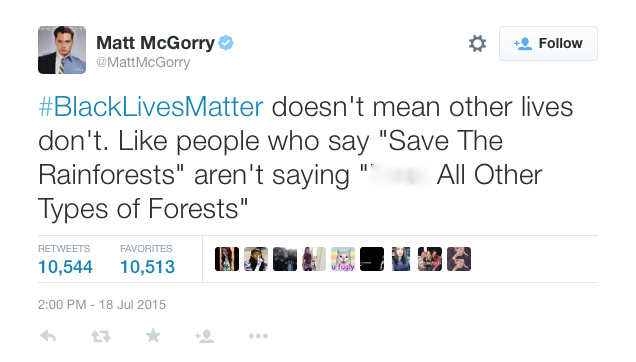 OITNB star has hilarious response to controversial hashtag
US actor Matt McGorry poses for a photocall for the TV serie 'How to get away with murder' during the 55th Monte-Carlo Television Festival on June 16, 2015, in Monaco. AFP PHOTO / VALERY HACHE (Photo credit should read VALERY HACHE/AFP/Getty Images)
(1) For people who think they are being more inclusive by saying #AllLivesMatter in response to #BlackLivesMatter , they are in reality
(2) (un)consciously undermining the purpose of the movement because THIS particular movement is about SPECIFIC issues, as any decently
(3) effective movement is. For example, it's hard to have an effective protest that's about gender equality, animal rights, racial equality,
(4) and saving the environment because that's not how getting **** done works. But I've never seen #AllLivesMatter promoted by someone who
(5) actually fights for social justice. So someone getting up in arms bc of #BlackLivesMatter while they sit on the sidelines and do little
(6) to nothing for Black lives or anyone's other than their own is probably not actually promoting that "All Lives Matter (Equally)" as
(7) much as they're trying to take down the idea that #blacklivesmatter" and denying its necessity and value. So. Show me the person who
(8) spends their life fighting for all lives ACTUALLY mattering and who says #AllLivesMatter and I'll show you a world where people are
(9) treated like they actually do (neither of those things as far as I've seen). Now I don't know much about all of this but I know enough
(10) to not consciously or unconsciously undermine a very needed movement that promotes EQUALITY. #BlackLivesMatter #EricGarner
#BlackLivesMatter doesn't mean other lives don't. Like people who say "Save The Rainforests" aren't saying "**** All Other Types of Forests"
Up Next

McGorry has been on social media fire lately, racking up the love with 1 million followers on Instagram and 307 thousand on Twitter. Watch him collaborate with "Gossip Girl" star Chase Crawford here:


Whatever you're doing McGorry, keep doin' it! Speak your mind and keep us entertained.