A complete recap of the best Twitter day ever, made possible by DeAndre Jordan and the NBA

Whatever the Internet's previous milestone day was prior to Wednesday, erase it from the record books. It pails in comparison to Wednesday, July 8 -- the day DeAndre Jordan changed his mind and changed Twitter forever.

This will take a while, but we'll explain.

The morning began with news that the Los Angeles Clippers were desperately trying to sway DeAndre Jordan away from his verbal commitment to sign with the Dallas Mavericks -- a mere 12 hours before he was eligible to make his Mavs deal official at 12 a.m. Thursday.

After hearing word of the Clipper contingent's trip to Texas to meet with Jordan, a Mavericks group also began flocking to him. This all started when Chandler Parsons tweeted an airplane emoji, or code for him flying out to meet with Jordan.

This was shortly followed up by a tweet from Clippers guard J.J. Redick, who lives in Texas, detailing his form of transportation to meet with DJ.

Blake Griffin then joined the party:

Now here's where things went from good to great. You remember Chris Paul, LeBron James and Dwyane Wade venturing off on a banana boat yesterday, don't you? Well, CP3 graced Twitter with this:

By now, the basketball world, and the Internet as a whole, was a wreck. But things were just getting started.

The NBA's resident dad and new Clipper Paul Pierce desperately wanted to get in on the fun, but just didn't know how. He tried, though. We presume a Google search of "how to emoji" shortly preceded this train wreck of a tweet:

Rudy Gobert of the Jazz responded about as good as anyone could've:

Then, these just kept piling up.

Just when we thought the day couldn't get any more ridiculous, it turned out it was just getting started. When the emoji nonsense started to fizzle out, the national reporters resumed doing their emoji-less jobs. But it only confused people more.

Yeah, uh, those tweets essentially at the same exact time. But, regardless of what time the meeting started/ended, it apparently went well -- well enough to apparently sway DJ back to LA. But, still, there was more:

Clippers believe DJ is returning to LA but I'm told they are staying at his house until he can sign at midnight.

Story going online with @ramonashelburne: DeAndre Jordan indicates to Clips he intends to stay BUT team reps not leaving DJ until he signs

This is a soap opera. Meeting over, sources say, but LAC stalling, staying with DeAndre because they know Mark Cuban just landed n Houston.

So far, Clippers able to keep everyone else out of house, including Cuban, agents. Everyone. They're in four-corners until midnight Eastern.

Yahoo Source: Clippers, DeAndre Jordan meeting was short. It was clear he was returning to them. Then they started to play cards.

THEN THEY STARTED TO PLAY CARDS.

This entire situation is ridiculous. Doc Rivers, Steve Ballmer and various Clippers camped out in DeAndre's Houston home, refusing to let anybody in or out of the house until paperwork was signed.

Oh, and Griffin gave us proof:

Don't agree with the furniture layout but I'm not an interior designer. pic.twitter.com/23PNgQB88z

Blake is live tweeting a hostage situation from the scene! Well, sort of.

This may seem like a seige, but DeAndre isn't asking anyone to leave. So more like "boxing out"

They are also playing video games inside DJ's house. One source who left the meeting said, "It's done. I wouldn't have left if it wasn't."

Cards and video games! Which card game? Was it Xbox One? PS4? WE NEED ANSWERS.

Quick sidebar here: Through all this, we may have actual proof that ESPN.com's Chris Broussard actually makes things up. Things got suspicious when this tweet popped up:

Jordan's house isn't in Dallas -- it's in Houston. And it was common knowledge at that point that Cuban was in Houston. So...

But after all the fun and games wrapped up, there was a firm agreement in place. Well, for DJ, a second one.

DeAndre has committed to return to the Clippers. He basically did yesterday. But they all gathered around at just now to make it official

Five minutes after it could become officially official, it was. The Clips announced via Twitter -- what else? -- that they re-signed their center.

Home is where your ❤ is. #WelcomeHomeDJpic.twitter.com/Ov0RoRKMDL

Still -- still! -- there was more fun to be had. Like Sad Chandler Parsons:

I thought I had a good pump fake.

And Paul Pierce being an old man again -- then channeling his former Brooklyn Nets self, showing us the visual proof:

That's why they brought me here lol pic.twitter.com/Z64Tkiyp01

(A flash wouldn't have hurt, Truth.)

After a long day's work, J.J. Redick was finally ready to reverse his F- grading of the Clippers offseason, get back in his car, return home and get some rest.

The storm has partially blown over, but Mark Cuban still has some grievances to air out. Through the whole process, it was widely reported that Jordan had ignored calls from Cuban and Parsons since Tuesday.

The Mavs owner gave fans some clarity in a Cyberdust message Thursday morning:

Mark Cuban's CyberDust message to Mavs fans (he says there is more to come): pic.twitter.com/bTq1Jqz2qa

Finally, remember that reporting gaffe by Broussard? Cuban had one last parting shot, and he directed it toward the ESPN reporter in a particularly damning way. 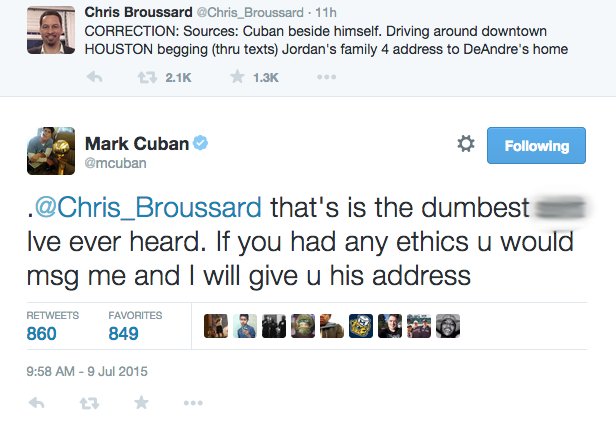 Yesterday's never-ending shenanigans seem to be seeping into today, so the book on this is far from close. What we know for sure is that DeAndre Jordan reneged on his verbal deal with Dallas to re-sign with Los Angeles -- and in the process, gave us one the most entertaining day of tweets we've ever seen.