Carmelo Anthony destroys Knicks fans for complaining about him

When the New York Knicks traded away Tim Hardaway Jr. to the Atlanta Hawks and brought in Kristaps Prozingis with the No. 4 overall pick and Jerian Grant with the No. 19 overall pick, fans were actually happy for once. It's hard to appease Knicks fans, but for once in a very long time, they took pause and realized they were actually pretty alright with the moves their team made.

In fact, Knicks fans were so okay with the moves that when they caught wind of possible criticism by superstar Carmelo Anthony, the backlash was instantaneous.

On Friday, cryptic tweets were sent out by Melo which seemed to imply he wasn't happy about Tim Hardaway Jr being dealt away. Knicks fans — being Knicks fans — got upset to the point where they took to social media to personally call Melo out for his unconfirmed criticism.

Rather than just taking it and ignoring the masses, Melo actually responded to a handful of Knicks fans and put them in their place.

Not everything was short and sweet from Melo though, as one fan who criticized the size of his contract received a stern response from the All-Star forward. 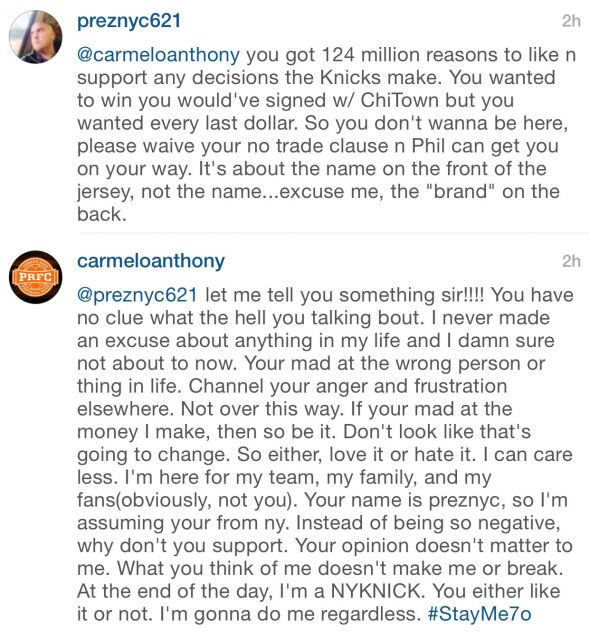 It's a tumultuous time to be a Knicks fan, as the team is awful and the cloud of James Dolan hangs over everything that might be happy. Still, things are looking up and fans are trying to be optimistic for once in a blue moon.

Melo and the fans will be alright once the season starts, and if it results in winning then all of this will be just a minor bump in the road.