Areas of heavy rain and thunderstorms will extend from parts of the Midwest to the Northeast, while more searing heat and blazing sunshine are forecast for the South on Father's Day.

A combination of the remnants of Bill and an approaching front will squeeze moisture out of the atmosphere from the central Plains to the Ohio Valley, central Appalachians, mid-Atlantic and New England on Father's Day. 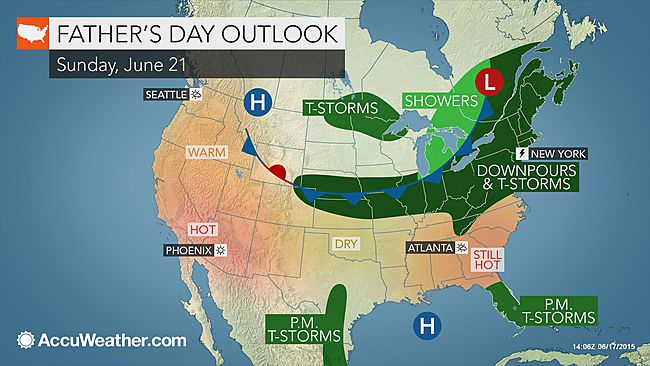 Rain falling on saturated ground can lead to localized incidents of flash, urban and stream flooding.

People in this swath may want to have alternative plans that include indoor activities as it may not be the best of days for a ballgame or a fishing trip.

Those traveling by way of area streets and highways should be on the lookout for flooding and not drive through roadways that are under water. Thunderstorms, mainly during the afternoon and evening, have the potential to cause airline delays.

Even when it will not be raining, high humidity and warmth will make it feel uncomfortable, unless your activities include a brief dip in the pool or visit to the beach.

An exception to the warmth will be the northern Plains to the upper Great Lakes, where a push of Canadian air will occur. There will be a pocket of showers and storms from part of North Dakota to northern Minnesota to around Lake Superior.

Another Day of Searing Heat for South

As has been the case this week, excessive heat with high humidity and blazing sunshine will bake the Southeastern states for the Father's Day weekend.

Temperatures will challenge record highs for June 21 from southern Virginia to the Carolinas, Georgia, northern Florida and Alabama.

AccuWeather RealFeel® Temperatures will range from 100 to 110 F over much of this swath and will make it dangerous for vigorous outdoor activities. Consider heading to the beach or pool, rather than playing baseball, jogging or a bicycle ride.

Areas farther west from Tennessee to Mississippi and Louisiana, as well as South Florida will be still be hot, just not so extreme as areas farther to the northeast as spotty storms tame temperatures.

Southern Plains to Dry Out

In the wake of Bill and tropical moisture most areas from Texas to Oklahoma, Arkansas and the southern parts of Kansas and Missouri will dry out under intense June sunshine on Father's Day weekend. 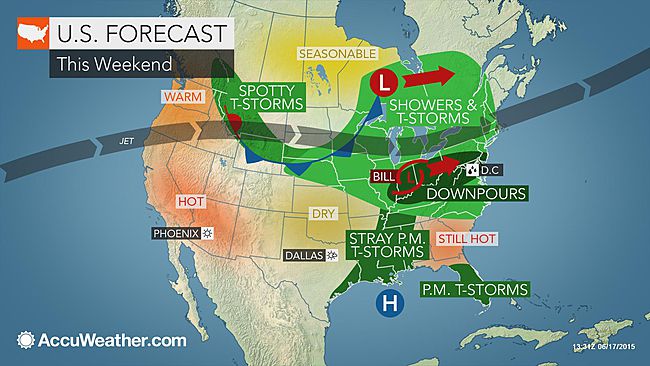 However, a few storms will erupt over parts of southern and central Texas during Sunday afternoon.

As runoff from Bill works its way downstream into the larger rivers in the region, flooding of nearby parkland and some neighborhoods can occur. In some cases, the flooding that began during May will continue.

Sun to Shine on Much of West

A lack of storm systems will translate to mainly sunny and rain-free conditions for much of the West on Father's Day. Even most areas in the Rockies, which have seen nearly daily thunderstorm activity during June will be dry.

The weather will cooperate for most activities including hiking and golfing. Just remember to drink plenty of water and wear sunscreen as the sun is intense this time of the year.

Morning low clouds along the Pacific coast will yield to afternoon sunshine and should make for a good beach or boating day.