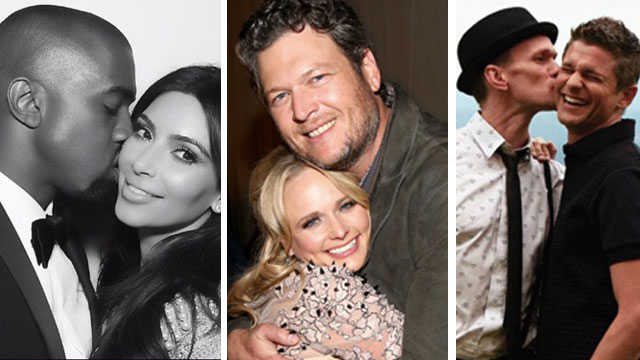 With celebrity divorce falling somewhere on the likelihood scale between the chance of rain in Seattle and the chance of death and taxes, conventional wisdom says that pinning your belief in the power of love on the strength of a celebrity union is somewhat misguided (also dumb).

But there's just something so unconventional about some of these couples, that makes us want to throw our better judgment to the wind and BELIEVE!

WATCH: 8 Couples Who Renewed Their Vows and Still Split

For better or worse, in sickness and in health, here are 12 celebrity couples who will shatter our framework of love if they ever get divorced.

These two are seven years strong into their marriage with no signs of stopping. They seem to be at the point in their lives where there's nothing they can't do.

They're not just a couple anymore. They are self-evident.

WATCH: Jay Z's B-Day Video for Beyonce Is Everything!

This country couple just makes us want to smile forever.

Not only are they possibly the best honorary aunt and uncle ever to Kelly Clarkson's daughter River Rose, but they have that kind of trust in each other that keeps good marriages strong.

Miranda even told 60 Minutes, the couple is so confident in their relationship, they won't even do a joint interview!

"We feel like we're very honest with who we are and our relationship," she said. "We've kinda told the good, the bad, the ugly as our relationship has progressed from the beginning till now. And people dig anyway and they make up lies, so I feel like, we don't really hold back, because if you hold back they're going to dig anyway so might as well just tell it."

When Angelina and Brad finally married in August of 2014, they were already "the couple."

They have a big, loving family together, they're iconic actors now turning their focus on producing and directing, they just make sense.

Brad & Angelina is the new Peanut Butter & Jelly. It just rolls off the tongue. We don't need anything to ruin that.

.@tomhanks I'm as in love with you today as I ever have been. More. #tbtpic.twitter.com/wT0N2nj77b

What makes Tom & Rita's bond so special is that they've gone through what many couples fear most -- a battle with cancer.

Rita told TheNew York Times that she was amazed with how Tom -- whom she has been married to since 1988 -- reacted to the couple's first serious illness.

"You never know how your spouse is going to react in a situation like this," she said. "I was so amazed, so blown away by the care my husband gave me. It was such a normal, intimate time."

Her stepson Colin Hanks revealed at the CBS Upfronts in May that Rita is now cancer-free after undergoing a double mastectomy.

WATCH: Rita Wilson's 'Girls Night In' Music Video Is Like a Taylor Swift Party in 20 Years

You can tell by our faces that I've been trying to take this felfie for a while #hatwearinfamilypic.twitter.com/MPjzvBLHeS

Somewhere along the way, these two wrestled the "It Couple" title simply by brute adorableness alone. Chris and Anna appear to have the kind of "I married my best friend" dynamic that is usually a GREETING CARD LIE, but somehow just isn't with them!

"Anna and I are meant to be together," said Chris in a Reddit AMA. "Our relationship has made me believe in divine intervention and destiny, just as much as my crazy career and the way I fell into this life. She and I grew up 20 minutes away from each other but never met until we met in LA."

In 2014, Ellen and Portia put to bed rumors that they were having a baby on The Ellen DeGeneres Show. The couple, who will have been married seven years in August, is simply happy enough with each other.

...Even if Ellen surreptitiously records Portia working out from time to time!

.@PortiadeRossi said I could watch her do her @JaneFonda workout. She didn't say anything about filming & tweeting it http://t.co/9d30nps3pN

Date night at the @johnlegend concert, Getting ready to sing our brains out : pic.twitter.com/tkjXm2T0Nf

Kristen and Dax have used couples therapy as a way to maintain their happy marriage before problems arise.

"You do better in the gym with a trainer; you don't figure out how to cook without reading a recipe," Bell told Good Housekeeping. "Therapy is not something to be embarrassed about."

We certainly hope so, because if the pair were to get divorced, we'd probably cry more buckets than we did during the Parenthood finale.

Happy 11 year anniversary to @ActuallyNPH Without him I’d be lost! He makes me so happy! pic.twitter.com/0QZfNIcKkC

NPH dispelled breakup rumors last year by writing, "I couldn't be more in love with my family. Any reports to the contrary are woefully mistaken. #grateful," along with this adorable photo.

Somewhat selfishly, we are not ready to give up their incredibly adorable photo-ops with their twins, Gideon Scott and Harper Grace.

This couple has been married since 1999, which means their marriage has technically has existed during three decades. Which is insane when you consider they remain to this day one of the hottest couples around.

Fashion goals, relationship goals, soccer goals. Victoria and David basically just give us all the goals.

Married since 2002, Gwen and Gavin have three sons together.

Besides 12 years of marriage being an industry anomaly, our belief in their relationship comes from how Gwen honestly and disarmingly talks about the realities of marriage.

"It's good to have those days when we both do our own things," she told Cosmopolitan earlier this year. "I think that's what keeps relationships going, when both people can be themselves and have their own individuality."

This is our proof couple. Kyra and Kevin have been married since 1988. They've got love DOWN.

Kyra once gushed about her husband to People, saying, "I don't know how he does it, but he always makes me feel like I'm the most beautiful woman in the room – the only girl in the room. He says 'Honey, you look beautiful. You are sexy!' Always, always, always!"

Hold on to the trust you have in this union, because our next entry might make you roll your eyes all the way into your head.

We know. We know. Kim is the queen of the 72-day-marriage, and while Kanye actually has a pretty good track record for long-term relationships, the correspondence he maintains with one of his high-profile exes is... rancorous at best. What are the chances that THEY'LL last?? You'd be crazy to take that bet.

Here's why to be crazy.

PHOTOS: Kim and Kanye -- A Look Back at Their Love!

It's easy to forget that 72-day Kim is now expecting her second child with Kanye, which means statistically at least, the literally are less likely to get divorced.

But those are just numbers. They don't really get at the heart of what it is about this couple -- who oftentimes drive us up a wall -- that makes us want to believe. Please read the rest of this while listening to Kanye's "Only One."

No one is denying Kanye West's realness. Kanye West is real AF. He gets into a lot of trouble because he literally can't not say the words he is thinking all the time. And knowing that, you know that no one on Earth is more in love than Kanye West is with Kim Kardashian. In his own Kanye way, he's told us that again, and again, and again.

NEWS: A Look Back at Kim Kardashian and Kanye West's First Year of Marriage

But we've all seen this before.... Even IF Kanye is in love, for Kim this is all about one thing -- publicity. Right?

Well, if Kim really doesn't love Kanye, she's doing a damn good job acting (and one quick look at her Rotten Tomatoes page shows us how unlikely that is).

Caitlyn Jenner told Diane Sawyer that Kim credits Kanye for helping Kim to understand her transition. And that's not the only time she has talked about her adoration.

On Instagram, Kim wrote, "You have changed my life in more ways than you know! The way you look at life inspires me! I love you so much!!!"

Does this mean things won't fall apart -- for Kim and Kanye, or any of these couples? Absolutely not. Just by the numbers, several of them at least HAVE TO.

And if and when they do, we'll be watching The Notebook, sobbing into a bouquet of roses that we literally bought for no one because love in 2015 is as distant as the moon.

Then we'll pick ourselves up and remember that some celebrity divorces go surprisingly well! Watch the video below for Hollywood's friendliest divorces.