The Cleveland Indians are showing their support for Mike Aviles' daughter who was diagnosed with leukemia recently by shaving their heads.

It has to be rough for some professional athletes to not be able to see their families throughout the course of a season. It has to be especially tough for professional baseball players who have 162-game schedules and travel seemingly every few days for a week, or more, at a time.

For talented shortstop Mike Aviles of the Cleveland Indians, his world has been turned upside down after learning the news of his daughter, Adriana, being diagnosed with leukemia. The 34-year-old player didn't expect to hear such debilitating news while starting a new season, but he left the team to be with his family during the hard time before returning on May 18.

While he was gone, Aviles' teammates decided to pay tribute to the shortstop's daughter by shaving their heads. 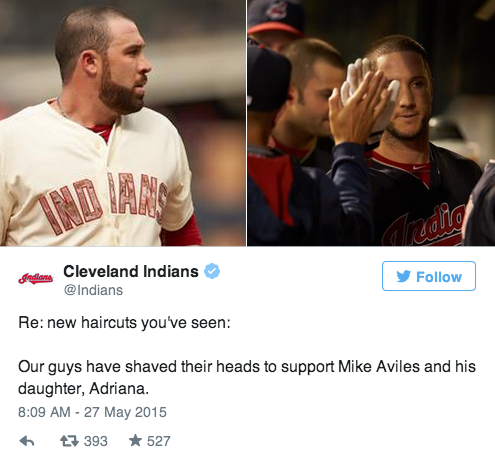 That's a pretty awesome move by some of the players on the team who don't have to personally worry about their own family member with leukemia, but instead are showing their teammate that they still care like it is their own daughter.

Second baseman Jason Kipnis told Cleveland.com that it's a team thing, not just a Mike thing.

"It's a team thing. It started with Mike's daughter because of what she's going through. Unfortunately, she's going to be losing her hair soon from chemotherapy and we all wanted to join in."

Not too often do you see professional athletes do something like this to honor someone that they may not even know very well. Adriana is getting back by the entire Indians roster and it's a rarity to see entire teams take part in this type of thing.

Aviles has to be going through a very hard time and his teammates get that. Since returning, the 34-year-old has been playing great. In fact, he has raised his season average from .268 to .310 with a home run and two RBI.

The eight-year vet was very grateful for the support his teammates, coaches and fans have been giving him as well during this trying time.

Let's hope Adriana gets well soon and I guess it's time to root for the Indians.