The New Zealand Sikh man who broke religious protocol by removing his turban to help an injured child is being rewarded for his selfless action by kind strangers.
When 22-year-old Harman Singh saw a 5-year-old boy had been struck by a car outside of his home last week, he didn't hesitate. Despite religious beliefs not permitting him to remove his turban and show his hair in public, Singh took off his headdress to cushion the bleeding child's head. 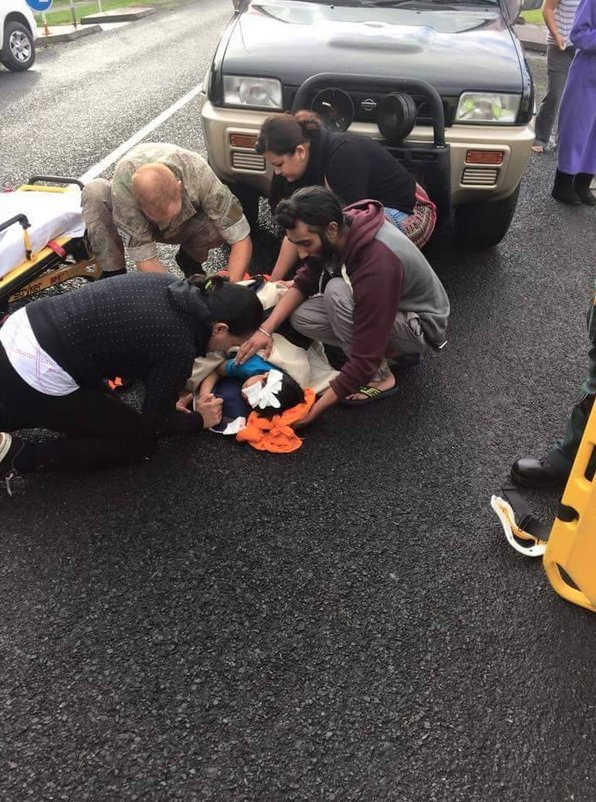 "I wasn't thinking about the turban. I was thinking about the accident and I just thought, 'He needs something on his head because he's bleeding,'" Singh told The New Zealand Herald. "That's my job – to help. [...] I think anyone else would have done the same as me."

Television networks interviewed Singh in his Auckland home and viewers all over the world could see he was living with very little furniture. The staff at Good News Network reached out to a local furniture store and surprised Singh with a truckload of new furniture.

"This the biggest surprise of my life," Singh said as he held back tears.

The five-year-old who was hit by the car on his way to school suffered a serious head injury and lacerations to his kidneys. He's now conscious and asking about the man who helped save his life.

Harman Singh takes off his headdress to cushion the head of a bleeding child who had been struck by a car outside of his home last week. (Photo courtesy of Daljit Singh)

Harman Singh, the New Zealand Sikh man who broke religious protocol by removing his turban to help an injured child, reacts after learning that the folks at Good News Network had surprised him with a truckload of new furniture. (Photo via Good News Network)
Amazing things happen when one does selfless acts. Sometimes karma rewards real soon and sometimes it may take... http://t.co/wkOqFxjsn4
Karma Is Alive: Sikh Mans Humanity Leads To Outpour Of Generosity http://t.co/naNX3I8KMH ... http://t.co/ZnIjQw8rJH
@HuffingtonPost such a great and humble man, such grace and humility a good lesson for us all.
@HuffingtonPost Tissue please! Most touching story I have read in a long time! #humanity #kindness And so thankful the boy is ok!
@HuffingtonPost That really is what life should be about. Helping others. The heart grows and sings.
@HuffingtonPost Good people doing good things for the right reasons. Wonderfully reassuring, isn't it? ♡♡
@HuffingtonPost 'the best of you is the one that brings benefit to others.' well done Harman Singh ji.
Up Next