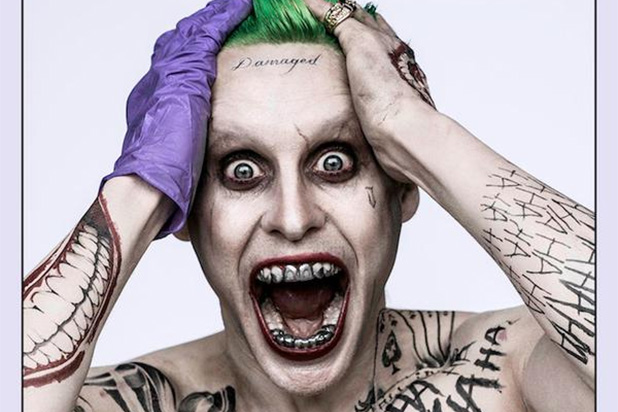 "Suicide Squad" director David Ayer has been steadily revealing more and more glimpses at the team of DC supervillains in costume, but now fans watching the production from the sidelines are taking things into their own hands.

Videos and photos featuring Jared Leto's Joker having a quarrel with Margot Robie's Harley Quinn in the middle of the street hit the web on Monday.

While Warner Bros. was quick to take some of them down, there are still videos showing the scene unfold from near and far.

Want to read a description?

The scene shows Quinn looking quite normal compared to her punk-rock appearance Ayer previewed, so fans are speculating it's a flashback scene when she's still Dr. Harleen Quinzel.

But looks can be deceiving, because she puts a bullet into a bystander who appears to be trying to help her while she's confronting her crazy lover, the Joker, who is cruising in a fancy purple sports car.

The Joker's hair is as green as grass, and he's rocking a flamboyant silver blazer. He's also not afraid to give his girlfriend the chance to blow his head off. When she doesn't, he quickly disarms her, and backhands her to the ground before getting back in his car.

Surf the web for video, if you can still find it, but check out a picture taken by a bystander below.

ok so apparently the joker hits harley and she pulls a gun on him. shoot him in the face baby. pic.twitter.com/XrqBQ0YjfF