Can you solve this math problem meant for 14-year-olds?

HARTFORD, Conn. (FOXCT) - Standardized testing in the United States has been quite a controversial topic in recent years. Some argue schools are putting too much focus on mastering the test, than actually learning anything. Others argue the questions are just downright confusing.

But a question from a standardized test in Singapore is now confusing adults. Tutoring business Study Room posted the question on its facebook page.

See if you can answer it. 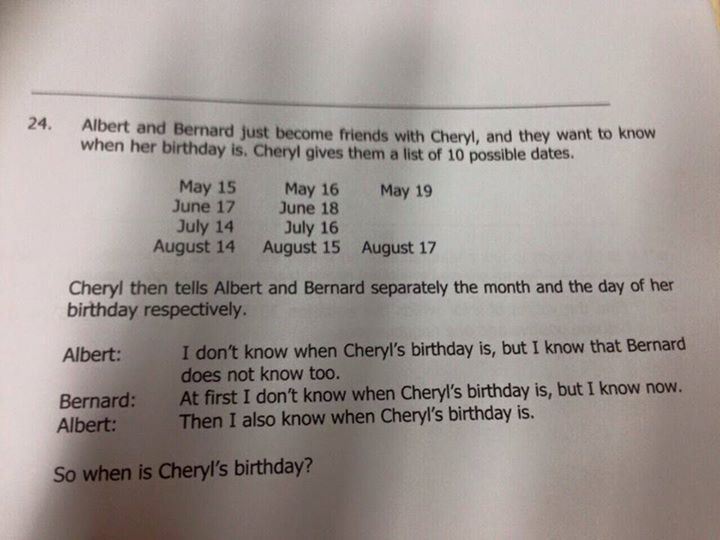 Think about it. The answer is below.

Here's the explanation from Study Room:

Following that statement, Bernard knows that May and June are ruled out.

Since Albert subsequently can also be sure of the date, he must know it's July. If it's August, he can't be sure as there is August 15 and 17.

According to Study Room, Singapore's ministry of education has yet to confirm if this is an actual question on the test, but it's not stopping people from trying to figure it out.

Still stumped? Cheer yourself up with these adorably funny letters from kids:

Can you solve this math problem meant for 14-year-olds?
Up Next


More on AOL:
Some Chambersburg, Pa. residents say they're being shamed by the borough into mowing their lawns
Vietnam veteran's license plate request deemed too offensive
Prince George checks the china cabinet upon hearing his father is in China
Read Full Story