Christmas Eve storm to cause lengthy delays for holiday travelers

A storm bringing heavy rain, fog, thunderstorms, a swath of snow and travel delays will converge on the East and Midwest leading up to Christmas.

The early stages of travel problems for both the roads and at airports due to patchy rain, fog and spotty ice and snow will continue over much of the eastern two-thirds of the nation on Tuesday.

The most widespread travel disruptions and the worst weather conditions in terms of windswept rain and travel-impairing snow will be centered on Christmas Eve. 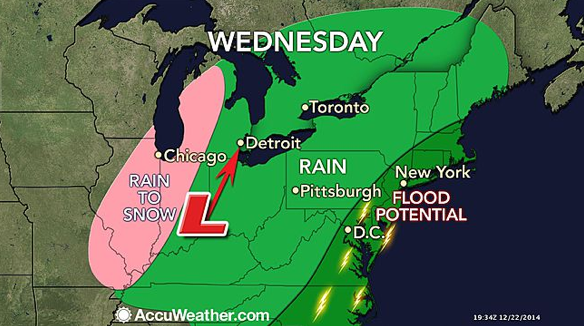 Problems due to snow and wind will continue in the Upper Midwest and central Appalachians into Christmas Day.

As warmer air surges northward with the rain, the risk of travel delays due to fog will increase.

According to AccuWeather Chief Meteorologist Elliot Abrams, "Areas and episodes of fog can be a problem for travelers in the Midwest and Northeast spanning Tuesday into Wednesday night." 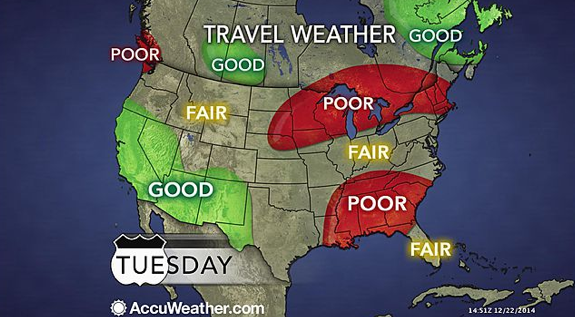 Low ceilings and fog could lead to flight delays at times from Atlanta and Pittsburgh to Philadelphia, New York City and Boston.

For many people traveling by ground and air, rain will be an inconvenience. However, enough rain can fall at times to cause poor visibility, while roads are jammed with vehicles. Excess water on the roads will reduce the braking action and increase the distance required between vehicles in an emergency situation.

Heavy rainfall in the Midwest will tend to be spotty, but as the storm moves northward on Christmas Eve, heavy rain will become widespread progressing through the Atlantic Seaboard. 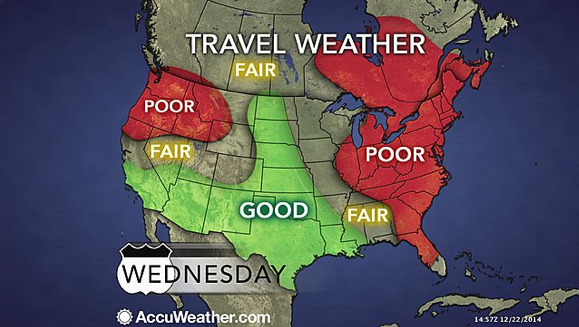 Enough rain can fall to cause urban and poor drainage flooding in the I-95 corridor on Wednesday into Wednesday night.

Check the start and stop times of rain, including when the most intense rain will arrive, using AccuWeather MinuteCast® for your location.

According to AccuWeather Senior Meteorologist Henry Margusity, "We are concerned about rapidly melting snow, combined with heavy rain leading to a stream and river flooding situation in northern New England."

Winds Could be a Snag for Airline Passengers

One of the most common causes of flight delays is wind, especially where it blows perpendicular to runways.

Gusty winds blowing from the south and east may lead to flight delays in the mid-Atlantic, New England and eastern Great Lakes region Tuesday night and Wednesday.

Increasing winds from the west and northwest may cause similar problems throughout the Midwest on Christmas Eve with the risk expanding to the mid-Atlantic and Northeast on Christmas Day.

The strongest winds are likely in New England late Wednesday into Thursday, when gusts could reach 50 mph along the coast and over mountains across the interior. Gusts could approach 40 mph around New York City Wednesday night.

Turbulence during and in the wake of the storm could be a problem on some flights.

A period of onshore winds can also lead to minor coastal flooding from the coast of New Jersey all the way up the coast of Maine.

The storm system will become strong enough to produce a period of drenching rain and severe thunderstorms in the South.

While much of the South, mid-Atlantic and New England will be spared travel problems from snow with this storm, significant travel delays and dangers will develop in the Midwest on Christmas Eve.

The greatest risk for snow-related delays will be across Michigan, Illinois, eastern Missouri and northwestern Indiana during the day Wednesday into Wednesday night. 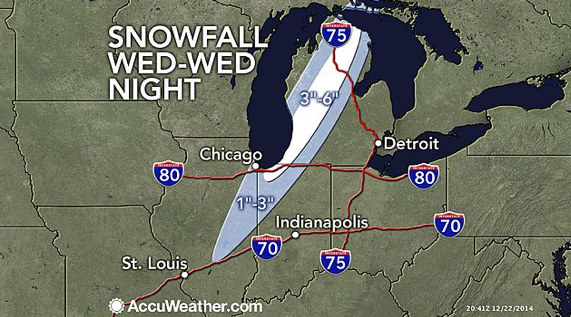 It is during the transition to colder air following rain, when the greatest dangers for travelers may develop.

While not a huge amount of snow is forecast for the Ohio Valley states and the lower Great Lakes with the storm itself, snow showers or burst of snow at the tail end could lead to a light, but rapid slippery covering on the highways.

From southeastern Indiana, southeastern lower Michigan to Ohio and Kentucky, motorists should be prepared for rapidly changing weather conditions during the evening hours on Wednesday.

The same conditions could occur late Wednesday night around the central Appalachians as temperatures fall.

Check AccuWeather MinuteCast® for your location before heading out on the roads. It will show you the start and stop times of precipitation over the next two hours, and it will show you when rain will change over to snow.

Meanwhile, as a storm targets the Midwest and Northeast on Christmas Eve into Christmas Day, a storm will also roll through part of the West with areas of heavy snow around the same time.

More on AOL:
Budgeting tools you will love
Things that will cost less in 2015
Who is tracking your kids