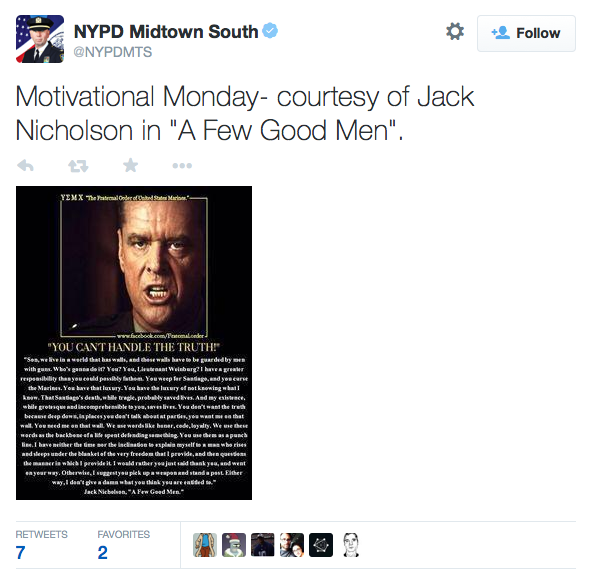 NYPD Twitter accounts have endured a series of well-documented fails in recent months, and a precinct did not do itself any favors Monday when it tweeted Jack Nicholson's famous courtroom rant from the blockbuster movie "A Few Good Men."

The midtown precinct, which covers Times Square, among other areas, fired off a since-deleted "motivational" tweet citing the famous movie monologue. The post was first flagged by Slate.

The rant tweeted by police comes from the courtroom scene where Col. Nathan Jessup, Nicholson's character, explains the rationale behind a "code red" order issued at a Marine base.

Jessup's infamous diatribe justifies the extreme violence used against the innocent man that led to his death.

NYPD officers have come under fire, and intense protests, in the wake of Staten Island man Eric Garner dying shortly after being arrested.

NYPD tweets 'you can't handle the truth' in apparent nod to civilian deaths
The NYPD quoted the part of a Few Good Men that led to Nicholson's character being arrested; which to them is as fictional as it gets.
It's strongly possible the NYPD either don't know the plot of "A Few Good Men" or are admitting to being criminals. https://t.co/zn10se3dIV
Dear Commander Winski @NYPDMTS are you saying you support breaking the law if it advances your end game? http://t.co/iuf6Pl2wI5
Beleaguered NYPD tweets misguided reference to 'A Few Good Men': Take a social media break, NYPD. http://t.co/QLGWXzDCiU
NYPD CO. officer Edward Winski tweet represents the sense of entitlement of police officers that they are above the law. #BlackLivesMatter
Interesting choice of "motivational" tweet by the #NYPD. But, you missed the entire point of the movie! #AFewGoodMen http://t.co/KTNCN8FIfp
Up Next


Video showed Garner, and African American, being taken down by a group of officers, with one using a tactical maneuver many feel is a chokehold -- a move that is prohibited under NYPD rules. He then was shown on the ground gasping for air.

"I can't breathe," he repeatedly said. Those words have become a rallying cry for anti-police protestors around the world.

A grand jury felt otherwise and declined to indict the cop for Garner's death.

Monday's NYPD tweet is the latest in a line of social media mishaps for the country's largest police department.

The highly-publicized gaffes have been piling up after police officials insisted earlier this year that each precinct set up its own Twitter feed, and that "New York's finest" be funnier online.

The accounts were meant to be a form of community outreach.