A Canadian businessman says he was charged almost $1,200 for in-flight WiFi on a Singapore Airlines flight.

Jeremy Gutsche was flying from London to Singapore and signed up for a $29 WiFi package, signed on, checked a few emails and then fell asleep

But that 30 bucks only covered so many megabytes. Anything beyond that would cost extra...a lot extra.

He'd ended up with a bill totalling $1,171. Gutsche posted a photo of his receipt on his website TrendHunter.com.

He wrote, "I wish I could blame an addiction to NetFlix or some intellectual documentary that made me $1200 smarter. However, the Singapore Airlines internet was painfully slow, so videos would be impossible and that means I didn't get any smarter... except about how to charge a lot of money for stuff. I did learn that." 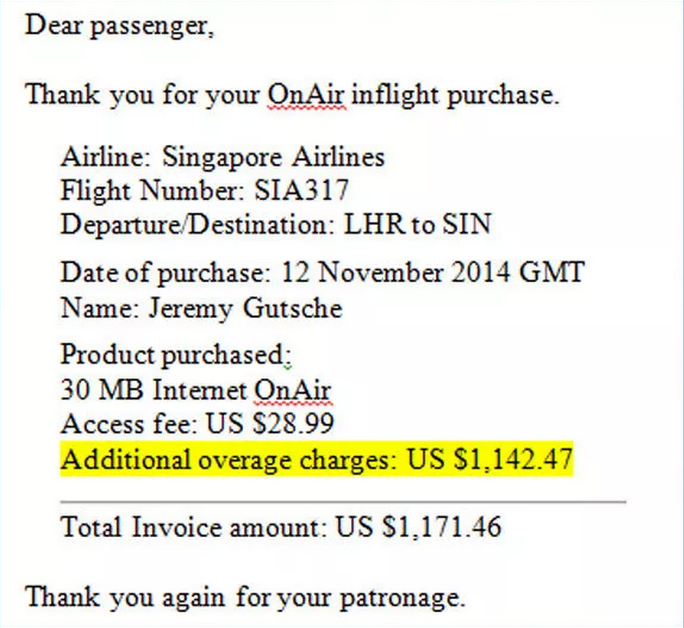 Gutsche did have to pay the bill and told The Wall Street Journal he doesn't think airlines should charge such mile-high prices for Internet access just because they can.

But he's not getting much sympathy. Commenters posted on his blog saying they think the terms and conditions are very clear.

Fortunately, Gutsche says his hotel in Singapore had free WiFi.

No need for WiFi with these windowless planes of the future: