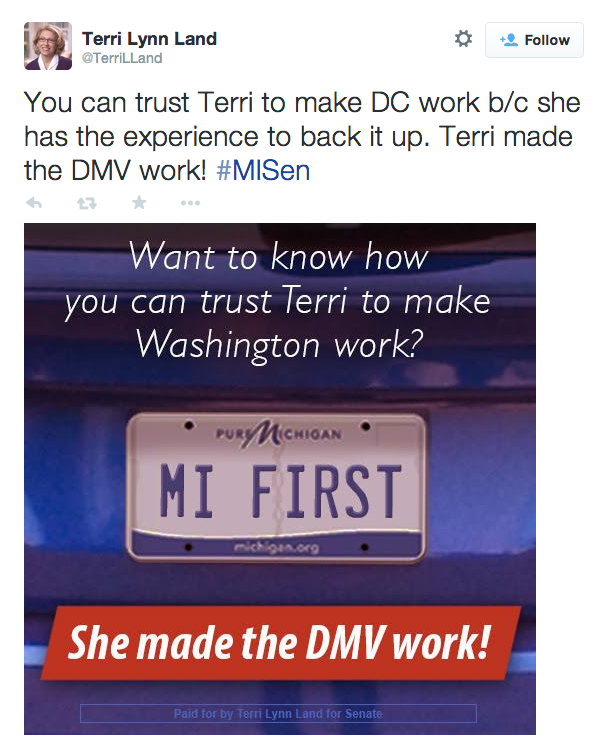 A Republican candidate for Senate proved today she does not know much about her home state.

The campaign for Terri Lynn Land, from Michigan, fired off a tweet touting her progress with streamlining the Department of Motor Vehicles. The state does not have a DMV.

"You can trust Terri to make DC work b/c she has the experience to back it up," the tweet insists.

"Terri made the DMV work! #MISen"

A graphic under the text further trumpets Lynn's DMV progress.

"Want to know how you can trust Terri to make Washington work? She made the DMV work!"

Also included is a license plate with the inscription "MI FIRST."

This is not the first misstep in Land's campaign. A television ad mocking the "war on women" also drew intense criticism.

.@Anne_Savage: "Terri Lynn Land's campaign is being run so bad it's almost as if she's running it herself."

Does anybody actually know anyone who likes Terri Lynn Land?

Land has also had numerous run-ins with the media, including one earlier this year where she threw up her hands and said "I can't do this," according to the Detroit Free-Press.

Other operational missteps led the National Journal to say the last few months have revealed "the warts and weaknesses" in her campaign.

Election day is only weeks away.