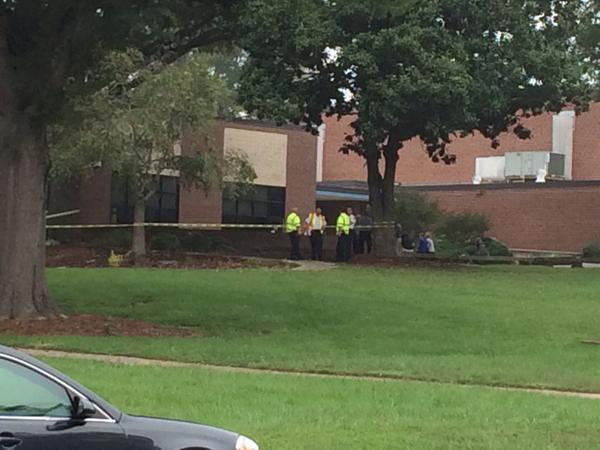 The shooting happened around 7:40 a.m. as the two male students argued in an on campus courtyard at Albemarle High School, Albemarle Police Chief William Halliburton said at a news conference.

The shooter put down his gun after firing the shots and waited for police to arrive. Halliburton said.

"We had the suspect immediately in custody," said Halliburton, who had 20 officers from several jurisdictions at the school about 35 miles east of Charlotte within minutes.

The other student was shot in the lower extremities and was taken to the hospital. Halliburton refused to talk about his condition or release the names and grades of the students involved. No one else was injured.

The school remained on lockdown Tuesday morning as investigators spoke to witnesses. The chief said he doesn't think any other students were involved in the argument or shooting, but they haven't finished their interviews.

Parents are being asked to pick up their children at nearby Albemarle Baptist Church. Classes have been canceled for the day, and school officials haven't decided if students will be back Wednesday.

Student Brittany Montgomery told WBTV-TV that she heard the students arguing, then heard three gunshots. Montgomery said a friend of hers broke down as she rushed to help the wounded student.

"I told her to calm down. He's going to be OK. He's just shot in the leg," Montgomery told the TV station.

Halliburton said his officers along with Stanley County deputies were helped by a school shooting exercise they performed at Albemarle High School several months ago.

"Many of those same faces who were out on that training scenario were there today," the chief said.