Former Good Morning America host Joan Lunden sheds her wig and opens up to People magazine about being diagnosed with triple negative breast cancer this past June.

The 64-year-old told the publication that she saw two choices when facing this tribulation. "I could decide to do nothing, but that's certainly not my personality. I was handed an opportunity to learn everything that I can about this and try to help others."

Lunden went public with her cancer diagnosis when she spoke to cancer survivor and GMA host Robin Roberts this summer -- and now her People cover will surely send a message. "Robin told me waiting for your hair to fall out is excruciating," she revealed. "So I didn't want to wait." 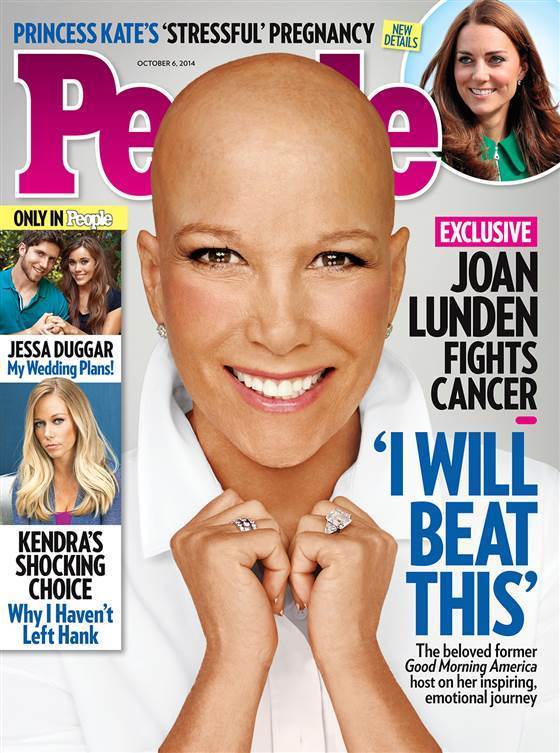 The mother-of-seven revealed that she got rid of her blonde locks within the first week of her chemo treatment. "You know it's going to happen one of these days and you are wondering how and when, so I just owned it," she said of her decision.

She added, "I'm almost reluctant to say it because it sounds superficial, but when you lose your hair, it just affects the way that you look at yourself in the mirror. You feel less feminine, pretty or desirable, and it's not an easy thing to go through."

As for why she wanted to make such a bold statement on her People cover, she said, "I had to make this big decision about whether or not to do the cover with no hair. It certainly isn't the comfortable way to go, but I decided I was going to try and help others and show women that this isn't the end of the world. You can go on -- and that was hugely empowering."

Lunden will continue to share her story on her blog JoanLunden.com and in a week-long series on the TODAY show.

More from ET
Lena Dunham: I got more men when I was bigger
Jeremy Renner got secretly married!
John Stamos' mother dies at 75
Read Full Story