Florida woman gets unusual plastic surgery
Up Next

Twenty-one-year-old Florida resident Jasmine Tridevil has declared that she no longer wants to date. As a result, Ms. Tridevil hired a plastic surgeon to surgically implant a third breast, complete with an artificial nipple and tattoo to resemble an areola.

In a recent interview with Real Radio 104.1, Tridevil says she is a licensed massage therapist, an aspiring reality TV star, and a huge fan of Criss Angel. When asked what her mother thought about the surgery, Tridevil said "I told my mom on camera, then (she) ran out the door."

Jasmine Tridevil contacted over 50 doctors before she found a surgeon who was willing to to perform the surgery. Ms. Tridevil has not revealed the identity of the surgeon. According to Tridevil, the doctor could not add an areola, so Tridevil had one tattooed on instead.

The news of her surgery has taken the Internet by storm, with her YouTube page reaching over 1.7 million views. She even claims in a facebook post on her Facebook page that she's "a creep ... a weirdo." 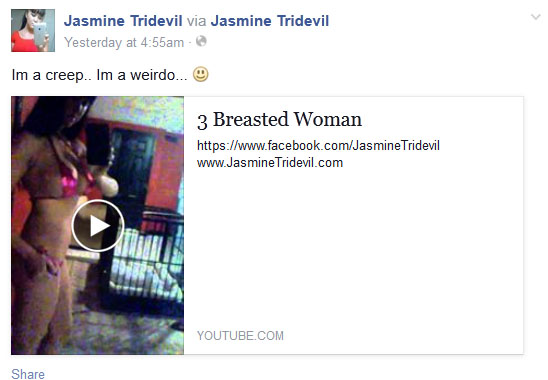 What do you think ... did she alter her looks simply to get attention?