Rihanna has some choice words for CBS after the network pulled her song from Thursday Night Football last week amid the Ray Rice controversy.

The network decided against airing her opening to a nationally televised game between the Baltimore Ravens and the Pittsburgh Steelers last week but appears to have wanted to bring her back into the fold. RiRi does not look interested.

"CBS you pulled my song last week, now you wanna slide it back in this Thursday? NO, F**k you!" The singer wrote on Twitter.

"Y'all are sad for penalizing me for this." 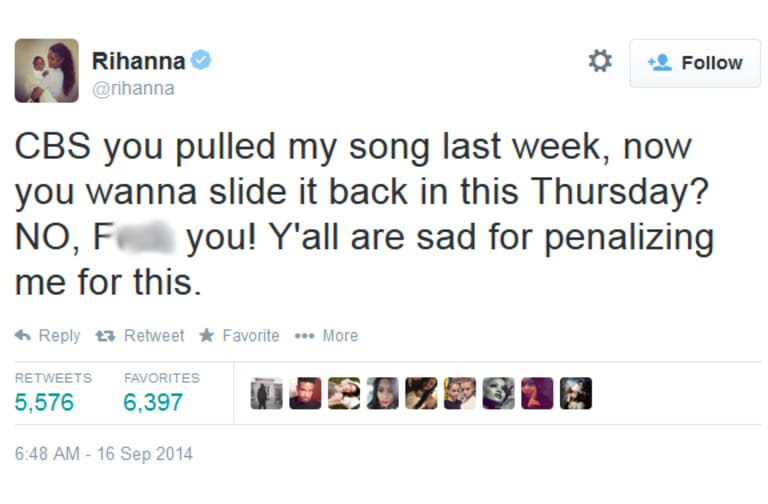 A scheduled interview with Ravens team owner Steve Bisciotti addressing his termination of Rice's contract following the release of new footage of him knocking out Janay Palmer was felt to be in conflict with airing a song by Rihanna, according to reports.

Rice was let go by the team and then suspended indefinitely from the NFL by commissioner Roger Goodell.

Rihanna is also a victim of domestic abuse.

On-and-off boyfriend Chris Brown, himself a signer, has previously pleaded guilty to savagely beating the Barbadian beauty after the 2009 Emmy Awards.

She subsequently spoke in an interview with ABC of the vicious assault that left her hospitalized and covered in bruises.

Rice similarly punched Palmer earlier this year in an Atlantic City casino elevator. The new footage was made public by TMZ only days before Minnesota Vikings running back Adrian Peterson was indicted for beating his son with a switch.

Rice was originally only suspended two games by the NFL and was allowed by authorities to enter a pre-trial diversionary program.

An AOL News message left with multiple spokespersons for CBS seeking comment has not yet been returned, but CBS has reportedly decided to drop her from the network.

After Rihanna protest, CBS will drop her song from opening of Thu Night Football thos week.