A LinkedIn page believed by many, including the Wall Street Journal, to have been created by the embattled Bronx Bomber has zero connections.

A source close to the three-time MVP told the Journal they have recently been in contact with A-Rod via email and received a message from the site with the subject line: "Alex Rodriguez just joined! Want to connect?"

It does not appear the person took LinkedIn or the 39-year-old third baseman up on the offer.

The page lists the fading star as founder, CEO and president of ARod Corp., a company known to be owned by Rodriguez which oversees his many business interests including real estate and memorabilia. 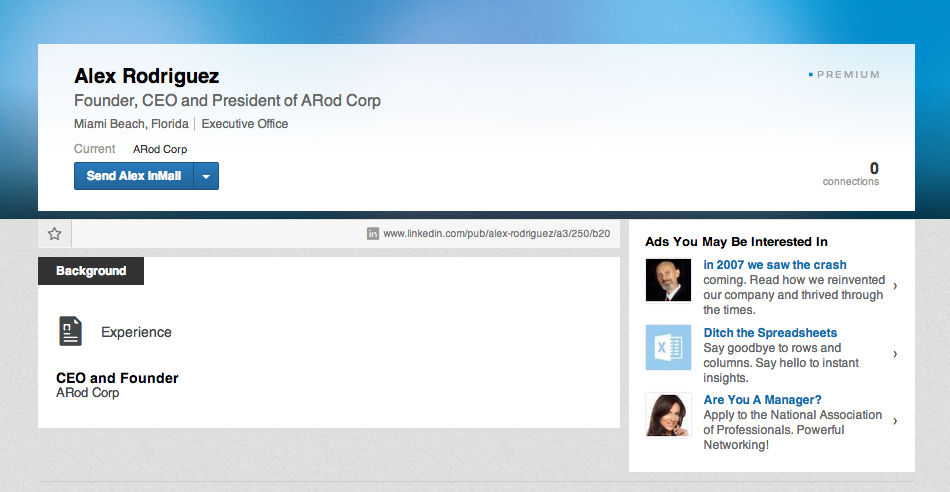 A LinkedIn spokesperson told the Journal that the website has not spoken directly with the disgraced 12-time All-Star about the page, but that "all signals indicate it is a real profile."

Rodriguez may have started the page as he begins to prepare for life after baseball.

He was barred from the game for the 2014 season after Major League Baseball discovered he had received performance-enhancing drugs from Biogenesis, a notorious South Florida clinic known to have supplied steroids to more than a dozen current Major Leaguers.

Rodriguez has kept a mostly low profile since conducting his own three-ring circus the last month of the 2013 season and while unsuccessfully appealing the suspension during the offseason.

The Yankees have publicly stated they expect A-Rod to be with the team for the start of the 2015 season. He is set to make another $61 million over the next three seasons.

If Rodriguez reads this article, he could always fire a LinkedIn invite in this direction.