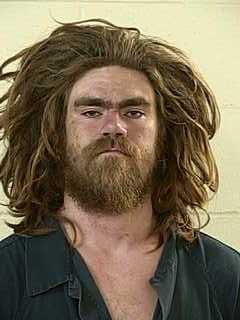 An Oregon man was arrested at a hemp festival after stripping down to his birthday suit and beating up cars and a police officer, authorities said.

Timothy Seaux, 27, had to be sedated when cops responded to calls of him bashing a car while two women sat inside and he began kicking the officers trying to arrest him early Sunday morning during the Jefferson State Hemp Expo.

Seaux was first encountered by officers around 12:30 a.m. Sunday morning, according to KPTV.

The 6'3", 250-pound beast had been restrained by four men after bashing up the car while two terrified women sat inside screaming for help, cops said.

He was "naked, combative and agitated," said police.

Seaux kicked and kneed officers while they tried to arrest him, even after they threw him into the back of a squad car, the station reported.

The hulking giant was then sedated and taken to a local hospital for examination before being arrested and hit with multiple criminal charges for the rampage.

He is currently being held in Josephine County Jail on a $15,000 bond.