Veteran Taylor Morris took a tumble at an airport in Vegas and messed up his prosthetic leg. That's when two airport mechanics took it upon themselves to help. "Fox & Friends" spoke with all three of them Tuesday. 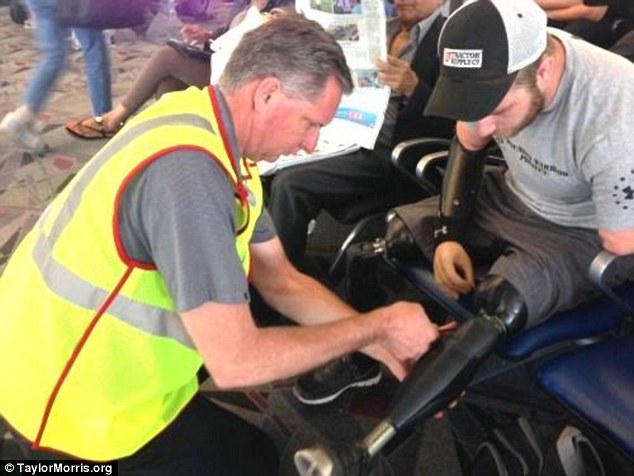 "We started to look around, and I told Keith what we needed, and he started trying to find a metric allen wrench."

The two men, Keith Duffner and Gary Bliss, found a tool that would work, and Duffner was able to fix the prosthesis.

McCarran International Airport investigated the story on its own and spoke with Duffner. He said of Morris, "We all are in ... debt to him and his family for sacrificing in service to us."

Morris was a U.S. Navy bomb specialist. He stepped on an IED in Afghanistan in 2012 and lost both of his legs, his right hand and part of his left arm.

Since then, his journey to recovery has been well-documented on his website, TaylorMorris.org, and he went viral even before this heartwarming story from the airport.

In 2012, "Today" did a feature on Morris and his longtime girlfriend and high school sweetheart, Danielle Kelly. NBC explored his life both before and after his injury.

As for the here and now, the vet is currently gearing up for a 5K glow run.