A look back at Robin Williams' side-splitting stand-up 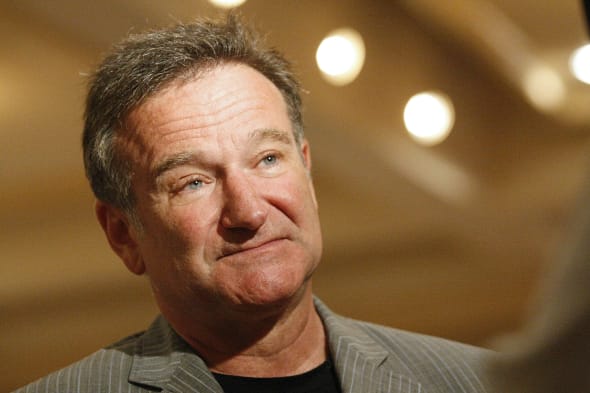 As the world mourns the loss of the 63-year-old acting genius, we're taking a look back at some of his earlier work as a hilarious stand-up actor.

Before he was 'Mork' to Pam Dawber's 'Mindy,' before he went hunting for good will, and before we all felt empowered to Carpe that Diem, Williams was quite a force to be reckoned with.

As he rose to fame, he often returned to the stage, reminding us time and time again that he was a man who didn't need a supporting cast.

"An Evening With Robin Williams"


Robin Williams at the Comic Strip, 1983


Weapons of Self Destruction: 2002


See how celebrities are reacting to the loss of a legend:

A look back at Robin Williams' side-splitting stand-up
We mourn the loss of our friend Robin Williams, who always made us laugh and smile. http://t.co/UOY8LTjVRA
I could not be more stunned by the loss of Robin Williams, mensch, great talent, acting partner, genuine soul.
Shocked by the news of Robin Williams passing. Rest in peace my friend
A tweet cannot begin to describe the hugeness of Robin Williams heart and soul and talent. This is so sad. #RobinWilliams
I can’t believe the news about Robin Williams. He gave so much to so many people. I’m heartbroken.
Robin was as sweet a man as he was funny. If you're sad, please tell someone.
RIP @robinwilliams You were one of the very best that ever was. You were one of my heroes. #RobinWilliams
I met this sweet, generous & brilliant man Robin Williams in 1991. Here we are with HIS idol Jonathan Winters. #RIP http://t.co/ZI4QV5QyuL
Just heard the news on @robinwilliams! What a talented individual so sorry! Once again we have lost an incredible talent! Prayers to family!
So sad about Robin Williams...😔
No! Robin Williams you were so loved.
"Carpe, carpe diem, seize the day, make your lives extraordinary...." RIP Robin Williams, you'll always be the captain of the Dead Poets Soc
I'm heartbroken. The great Robin Williams died this morning. His publicist tells us he battled severe depression recently. #RIP
RIP TO ONE OF THE GREATEST COMEDIC ACTORS OF OUR TIME MR. ROBIN WILLIAMS 🙏🙏
Heart broken!!! #RIP Robin Williams!! Praying for your family on such a sad day. You've given so much joy to so many. Devastating we lost u
Can you think of anybody more full of life than Robin Williams!?!? So sad.
So profoundly broken hearted that @robinwilliams will never laugh again. How brilliant was he? Beyond description. #beyond sad
#RobinWilliams Can't believe I'm reporting his death right now on #CNN. #RIP
#RobinWilliams Oh Captain, my captain!
Robin Williams: A sampling of world media headlines right now on his death. http://t.co/2Deov4TFkT
Williams first played here in 1976. #robinwilliams #comedystore @KTLA @DaveMechamTime http://t.co/ENBDC06MTF
Devastating finding out about @robinwilliams today. He was an amazing talent and incredibly sweet. So sad.
RIP mr Williams - beyond great talent -such a kind and lovely person
New marquis at @thelaughfactory. #RobinWilliams #RestInPeace Make God Laugh. @ABC7 #mapit http://t.co/IkmRrOMCFW
Robin Williams being nice to a bunch of excited comedians http://t.co/BWj8JaSQ35
RIP sweet, amazing #robinwilliams. The world's greatest jester is now no doubt keeping God in stitches... you will always b a hero 2 me. Xo
Up Next


Which of Robin Williams' many roles is your favorite? Share your memories and thoughts in the comments.