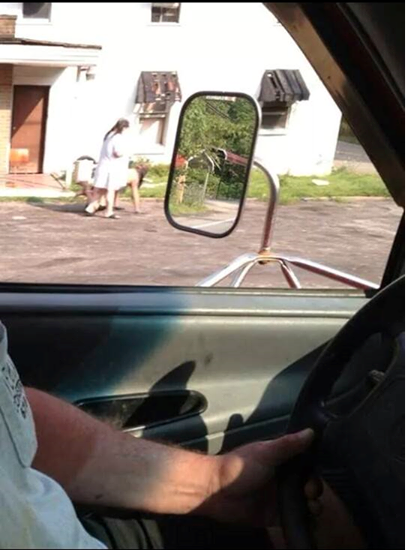 Drivers in Wheeling, W. Va. got an interesting surprise Wednesday morning when many spotted a woman walking a naked man outside of an apartment building along Route 40, according to 'The Smoking Gun.' KDKA reports the fully clothed woman was allegedly leading the man on all fours like a pet with what appeared to be a dog leash.

As seen above, some drivers even stopped to snag a photo of the unlikely couple. According to the official police report, two officers responded to the scene at around 9:30 AM. One witness told police the man had a bag over his head, his ankles were bound and an unknown object was protruding out of his anus. The witness then helped police identify the couple as 53-year-old Barbara 'B.J.' Geardello and her boyfriend, 56-year-old Robert Deyell of nearby Washington County, Pa. When the officers questioned the couple they were fully clothed and identified as 'consenting adults,' WTRF reports. Geardello told police 'it was a sex game and they meant no harm by it.' She did note that she was offended by a person who passed by and called her a 'freak.'

Investigators have sent a copy of the report to prosecutors, who may make a decision about pressing charges sometime next week.