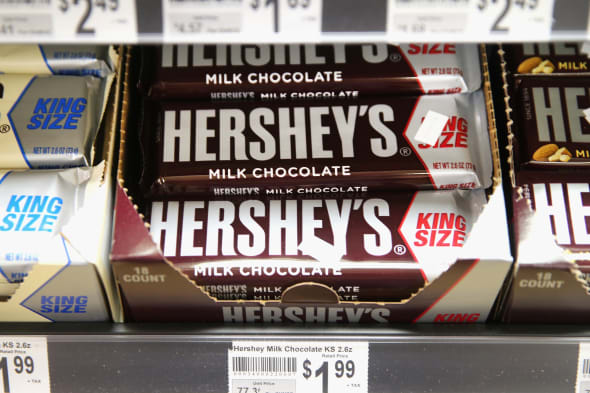 (Reuters) - Hershey Co, one of the world's best known names in chocolate, expects its first price hike in three years to crimp short term sales, but over the long haul the popularity of chocolate will prevail, the company's chief executive said on Thursday.

President and CEO John Bilbrey said the 120-year-old maker of Hershey Kisses and Reese's Peanut Butter Cups will be particularly alert to any reduction in sales caused by the increase, which averaged 8 percent, among low income consumers.

Bilbrey told analysts on a conference call to discuss second-quarter financial results that in the past many consumers adjusted to higher prices "over time," but he said more expensive chocolate would lower volume for the rest of the year, primarily in the fourth quarter and into 2015.

Hershey announced its price increase on July 15, saying it was in response to soaring cocoa and dairy prices. The hike comes at a critical time for candy makers, as some of the world's best known brands are fighting for U.S. consumers in a shrinking market.

But Swiss chocolate maker Lindt & Spruengli has said its main priority was to gain market share globally by absorbing some commodity price increases.

U.S. demand for chocolate has declined annually since 2006, with the exception of 2013 when there was slight growth, according to data from Euromonitor International. In contrast, world consumption has increased.

This is in part because of the increasing popularity of premium products and bite-size chocolates that weigh less than many chocolate bars. Global demand is increasing and there are reports that prices are getting higher because cocoa farmers are not going to be able to increase production enough to meet the demand for chocolate.

In its results, Hershey said full-year net sales were expected to rise around the low end of its long-term target of 5 to 7 percent and growth in its candy and mint category would be around 3 percent in 2014, slightly below the long-term projection of 3 to 4 percent.