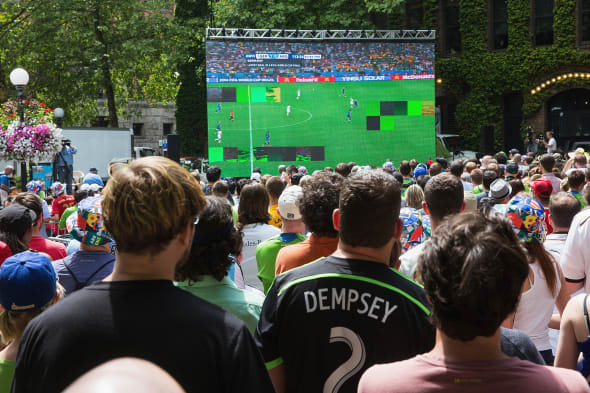 NEW YORK (AP) - Even without the home team involved, the World Cup final between Germany and Argentina set a television viewership record in the United States, capping a tournament that exceeded expectations for interest on both ESPN and Univision.

The month-long World Cup also was responsible for more than 3 billion interactions on Facebook and 672 million messages on Twitter, the social media companies said on Monday.

An estimated 26.5 million people in the U.S. watched Germany's extra-time win on Sunday afternoon, the Nielsen company said. The game had 17.3 million viewers on ABC and another 9.2 million on the Spanish-language Univision. In addition, just over 750,000 people were watching the game during a typical minute online through services provided by each network.

The 2010 finale between Spain and the Netherlands, along with the U.S. team's 2-2 draw against Portugal earlier in this year's tournament, both had 24.7 million viewers.

Given the growing interest in the tournament as it went along, the size of the audience for the final game wasn't that big a surprise, said Scott Guglielmino, ESPN senior vice president of programming. The tournament as a whole exceeded expectations for ESPN, and surprised Guglielmino in the way it permeated U.S. culture as no World Cup has before.

The average viewership for all 64 World Cup matches was up 39 percent over 2010 on ESPN and its sister station ABC, and 34 percent on Univision, Nielsen said.

"We all knew that everything was in place to be well-delivered to the audience and we needed a good performance by the teams, and that happened," said Juan Carlos Rodriguez, Univision sports president.

At least until some cautious games in the knockout round, play was more wide-open with increased scoring and that was appealing to viewers, the executives said. The event also had stories that transcended the games itself, with Uruguay's Luis Suarez suspended for biting another player and host Brazil's historic meltdown against Germany.

On ESPN, tournament games averaged 4.56 million television viewers, compared to the 1.04 million viewers for games in the 2002 World Cup that were in Korea and Japan.

World Cup organizers FIFA said that more than a billion fans worldwide accessed information about the tournament through its digital platforms. "This has been the first truly mobile and social World Cup," said FIFA President Sepp Blatter.

Facebook said 88 million people made a total of 280 million posts or "likes" about the final game. The most social "moment" of the tournament on Facebook, however, was right after Germany scored four goals in seven minutes during its semifinal victory against Brazil.

On Twitter, the Brazil-Germany match exceeded the final game for most tweets.

Both ESPN and Univision invested heavily to make the tournament an immersive experience, signing up former players for hours of discussion between match times.

Univision went high-tech, with virtual reality displays that pitted famed players from different eras against one another. The company also worked with an Israeli company to invest in technology that allowed its feed of games to appear on the network some five or six seconds before its English-speaking rival.

"We're the real home of soccer in America, regardless of language," Rodriguez said. He predicted that ratings for the Copa America Centenario tournament in 2016, which will match the best teams in North and South America, will exceed this year's World Cup on his network.

The ratings performance was a little bittersweet for ESPN and Univision, however. Both networks were outbid for the rights to broadcast the 2018 World Cup in Russia.

So there was a little gamesmanship involved. Guglielmino said the intention was to create a "high bar" for Fox when it broadcasts the 2018 tournament. Given that the games in Russia will take place at inconvenient times in the U.S. market, Fox may be hard-pressed to beat these ratings.

"At the end of the day, a lot of us are just as competitive as some of the people we cover," Guglielmino said.

David Bauder can be reached at dbauder@ap.org or on Twitter@bauder. His work can be found at http://bigstory.ap.org/content/david-bauder.

More from AOL and partners:

Habits of Americans who are 'thriving'

9 hotel scams and hidden fees to watch for

Cops fired for allegiance to a disturbing group

Diaz not the only one to bare it all over 40

Star was weeks away from being a quadriplegic

Pistorius in nightclub run-in over weekend