Yale student says she faced expulsion due to her weight

A student at Yale University faced expulsion -- not for her behavior, but for her weight. "Good Morning America" has more.

'We continue with the Yale student who became a junk food junkie because the Ivy League school thought she was too thin and demanded she gain weight or leave the university.' 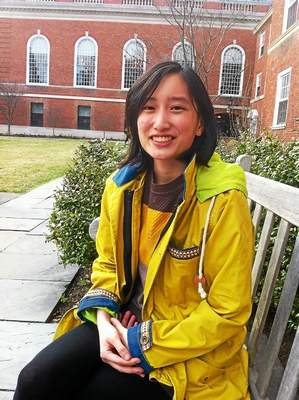 Frances Chan, 20, is quite small. She's 5'2" and 92 lbs., but she attributes her small figure to genetics, not an eating disorder or an unhealthy diet.

The Huffington Post published an essay Chan wrote about the situation. She says, 'The medical professionals think I have an eating disorder -- but they won't look past the number on the scale, to see the person right in front in them.'

Chan says Yale required her to come in for weekly weigh-ins, and so she began eating copious amounts of junk food in an attempt to gain weight. She would eat three to four scoops of ice cream twice a day with chocolate or cookies, and Cheetos right before bed.

But Chan told the New Haven Register even all that junk food didn't do the trick. She only gained two pounds, and Yale said that wasn't enough. She wrote Peter Salovey, president of Yale, notifying him of her situation. She said, 'At Yale, you're taught to be the change that you want to see in the world. Well, this seems like an easy thing to change.'

"Good Morning America" said Yale responded in a statement saying the university can't comment on individual students' cases but that the quote 'welfare of all our students is our primary concern.'

In her essay, Chan says it's clear Yale cares about its students, but that she's not going to continue with check-ups. She says they can try to kick her out, but for now she'll be studying for midterms.

If you are struggling with an eating disorder, call the National Eating Disorder Association hotline at 1-800-931-2237.
Read Full Story