Are tougher sanctions in store for Russia? 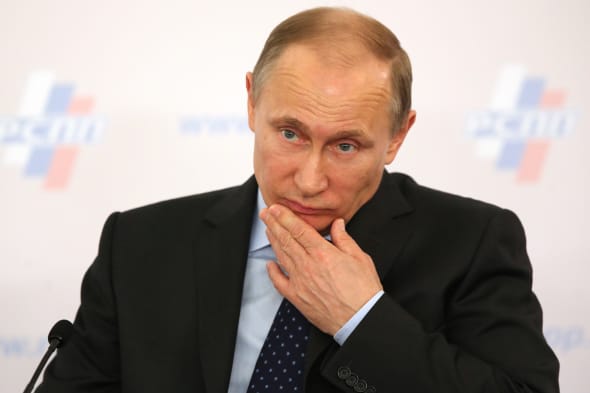 WASHINGTON (AP) - U.S. sanctions against a Russian bank and the Kremlin's inner circle have pinched Moscow, but if the goal is to get President Vladimir Putin to roll his forces out of Crimea or prevent him from doing any more land grabs, their effectiveness remains in doubt.

Putin has mocked the punitive steps President Barack Obama has taken so far in their post-Cold War game of chess - or chicken.

He made jokes of Obama's decision this week to freeze the assets of businessmen with close ties to Putin as well as Bank Rossiya, which provides them support. Putin quickly retaliated by slapping travel restrictions on nine U.S. officials and lawmakers, including Sen. John McCain, who quipped: "I guess this means my spring break in Siberia is off."

More serious repercussions loom if the standoff heats up.

For now, Putin says there is no need for further Russian retaliation, yet his Foreign Ministry vowed that Moscow would "respond harshly."

Putin claims to have no plans for further incursions into Ukraine or elsewhere in the neighborhood. But he's not planning to reverse Russia's annexation of Crimea either.

The U.S. and Europe are left to weigh the possibility of levying tougher measures on Russia's energy and banking sectors. That could backfire if Moscow, in turn, seized American or other foreign assets or cut exports of natural gas to Europe, which is heavily dependent on Russia for energy.

"If Russia doesn't do anything other than what they've done so far with Crimea, I think the Obama administration will probably stand pat with the sanctions that it has already imposed," said Richard Fontaine, president of the Washington-based Center for a New American Security. "I think they are waiting to see if this is the end of the Russian adventurism, or if there is more to come, and then they will react with more sanctions accordingly."

By taking a step-by-step approach, the U.S. is giving Russia a chance to take the "diplomatic off-ramp" and resolve the crisis, Fontaine said. "The problem with that is that Putin has shown absolutely no appetite to take any off-ramp," he said. "If the off-ramp means reversing what he's done in Crimea, I don't think these sanctions are going to achieve that."

Just the threat of harsher sanctions has dampened the outlook for the Russian economy, which is already on a slow-roll. Russian stocks were under pressure Friday as a second credit rating agency put the country on notice of a possible downgrade and Visa and MasterCard stopped serving two Russian banks, including Bank Rossiya.

The Russian stock market has lost more than 10 percent this month amid growing tensions between Russia and the West. Also on Friday, Russia said it might scrap plans to tap international markets for money this year as it counts the cost of the sanctions imposed in the wake of the annexation of Crimea.

The EU hit 12 more people with sanctions Friday over Russia's annexation of Crimea, bringing its list of those facing visa bans and asset freezes to 33. They include one of Russia's deputy prime ministers, a Putin adviser and the speaker of Russia's upper house of Parliament, according to a document obtained by The Associated Press.

Still, the EU roster fell short of the top-tier list of Putin associates the U.S. sanctioned - evidence that Europe is not as eager to punish its energy supplier and trade partner.

Sen. Dick Durbin, D-Ill., who went to Ukraine with McCain last week, called on Obama to rally the support of U.S. allies on sanctions. "To do it alone is very limited. To do it with our allies can have some impact on Putin," he said.

McCain also said that sanctioning Russian lawmakers and Putin's inner circle won't get Putin's attention. He said the U.S. should provide financial aid to Ukraine, immediately send defensive weapons to the country, resume work on the missile defense system in Poland and develop a long-term plan to get energy to Europe and Ukraine.

"The higher price that Putin thinks he has to pay for further aggression, the more likely that he doesn't act," said McCain, who described the situation as an "incredible threat" to the stability of Europe.

They urged Obama to sanction even more Russian officials, including Putin himself and those closest to him. They said that sanctioning Bank Rossiya was a good first step but that the U.S. should expand the scope of sanctions to isolate Russian financial institutions and businesses that are either complicit in Russia's incursion into Crimea or support Syrian President Bashar al-Assad.

The group praised the deployment of U.S. fighter aircraft to Poland and the Baltic states but said the U.S. should deploy additional ground forces, missile defenses or other assets to former Warsaw Pact members of NATO, work to reduce Europe's dependence on Russian natural gas and expand U.S. military rotations to Georgia, which is seeking membership in NATO.

Experts on Russia and Europe caution against looking at the Crimea problem too narrowly. It's possible that Putin's move into Crimea is part of a longer game of stopping NATO enlargement - or at least keeping neighboring countries politically off-balance so they can't be further integrated into NATO or have closer relationships with the West.

"We don't have anything against cooperation with NATO, nothing at all," Putin said in a speech this week. "We are against having the (NATO) military alliance ... behaving as the master of the house outside our fence, next to our home or on our historical territory."