A woman in Texas is taking the high road when it comes to her cheating husband - and taking out an ad. 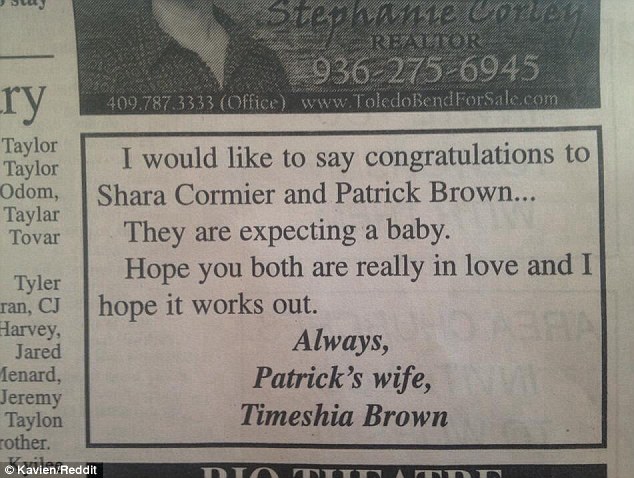 "I would like to say congratulations to Shara Cormier and Patrick Brown ...They are expecting a baby. Hope you both are really in love and I hope it works out." It was signed by Patrick's wife, Timeshia Brown.

A photo of the ad is being credited to Reddit, but is making its way around media outlets - it's being called "passive aggressive" and a "cutting takedown."

We're calling it hilarious. It's unclear exactly when the ad was published, but the pic was posted earlier this week. If it wasn't a prank, we say well done, Timeshia.

We saw a similar move last March, when a woman named Jennifer bought a billboard to advertise the GPS tracker that helped catching her cheating husband.

While this ad might be smaller in size, it's classier in wording, which we sort of love. And as the Metro points out, it gets the job done.

No one seems to have tracked down Timeshia yet, but according to the Dallas Morning News, the ad was posted in a Texas newspaper.

Bottom line - maybe next time he'll think before he cheats.